Ride With the Devil (The Criterion Collection) 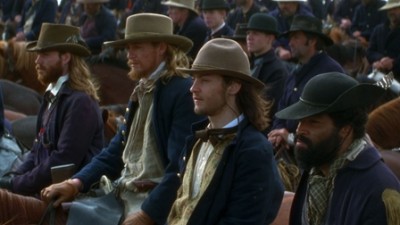 It's easy to understand why
Ang Lee's 1999 film Ride With the Devil flew under the radar,
almost completely unnoticed, during its original brief theatrical release.
It is an unusual film, one in which good and evil are intertwined in
an uncomfortably gray braid of striated allegiances. Delicately
shaded performances (particularly by Jeffrey Wright) ground the propulsive,
suspenseful narrative amid a brutal but realistic world.

German-born Jacob Roedel (Tobey
Maguire) is a Missouri youth shocked into defense of the South when
his neighbor Jack Bull Chiles' (Skeet Ulrich) farm is burned and father
killed by a band of jayhawkers - militant irregular pro-Union guerrillas.
Jake and Jack Bull join a band of bushwhackers - the pro-Confederacy
counterparts to the jayhawkers. They join in league with George
Clyde (Simon Baker) and Clyde's best friend, a freed slave named Holt
(Jeffrey Wright). After a series of raids under the command of
Black John Ambrose (James Caviezel), the smaller group retreats to a
rural dugout to wait out the winter.

There, Jack Bull romances their
local sponsor's widowed daughter-in-law, Sue Lee (Jewel Kilcher).
But the relationship is short-lived; after Jack Bull dies, Roedel and
Holt team up again with Ambrose's bushwhackers for increasingly vicious
attacks. After a murderous raid at Lawrence, Kansas, Roedel and
Holt are both wounded, and from there they escape to a safe farm where
Sue Lee has been living since Jack Bull's death. At the farm,
Roedel and Holt recover from their wounds and make momentous decisions
about the future direction of their lives.

No plot summary, however, can
do justice to the film's finely-woven themes. German-born Roedel
and former slave Holt come to understand each other thanks to similar
experiences with prejudice - and, even more importantly, their muddled
sense of identity. Roedel's family, as German immigrants, are
fully aligned with the Union - yet Roedel himself becomes a bushwhacker
out of loyalty to Jack Bull and because he has considered himself, naturally,
a Missourian. Later, he learns that his father has been murdered
by another band of bushwhackers, throwing his already precarious sense
of identity and political position into chaos.

Holt, meanwhile, is a former
slave, who nevertheless finds himself fighting on the side of the Confederacy,
like Roedel, due to personal loyalty to a friend. Holt has no
illusions about the contradiction inherent in what he is doing; it's
his own morality that drives him to stand by Clyde. But after
Clyde dies, Holt knows, for the first time, what real freedom feels
like.

The intertwined stories of
Roedel and Holt elegantly transcend issues of race, just as the characters
themselves grow to understand that there are vastly more fundamental
questions of the human condition than the color of one's skin.
At the same time, the film hardly pretends that race isn't a key issue
in American life - the struggles of the past are explicitly related
to problems that still exist in our country. All of this is expressed
by screenwriter James Schamus and director Ang Lee with a far finer
sensibility than I am able to convey through words alone here.
Such deep conveyance of a complex and insidious social issue is rare
in film. It's not just the way Ride With the Devil "addresses"
race; it's the way the story portrays the deeper consequences of racial
division upon individual human beings.

Ride With the Devil
received a lot of flack for its casting, but I can't find any fault
with it. Tobey Maguire has a tendency to come off as "soft,"
but I think he does a fine job here. He is a good actor who carries
most of the picture without showing signs of strain. (Although
I do take issue with the scenes of domestic comedy in the movie's
final act - Maguire handling a baby in particular - I can't blame
the actor.) As Sue Lee, Jewel is mostly credible; the only thing
she has working against her is that she's recognizable as a music
superstar. Otherwise, her performance is fine, if not spectacular.

As Holt, Jeffrey Wright steals
the show. Holt is a difficult character, as written, but Wright
brings a sense of moral clarity to Holt's words and actions.
I'll even go as far as to say that, thanks to Wright, Holt may be
one of the most complex, interesting, and significant characters from
the last couple of decades of movies.


As usual, it's impossible to find fault with Criterion's transfer.
The enhanced 2.35:1 image shows of Frederick Elmes' gorgeous cinematography
in splendid color and fine detail. Blacks are rock-solid, for
the most part, although a few night scenes involving campfires come
off as a little brown. Generally, however, the image sparkles
with a crisp, naturalistic light that is unusual in period pieces.

The Dolby Digital 5.1 surround track is engagingly dynamic.
Dialogue remains at the forefront of the mix, although some actors,
particularly Wright, occasionally mumble. This is not too noticeable
on a surround speaker system, however, as the mix is well-separated.
Music (by Mychael Danna) is both appealing both artistically and sonically.
Sound effects during the battle scenes are punchy.

This single disc release contains
two commentary tracks: the first is by Lee and Schamus; the other
is by Elmes, sound designer Drew Kunin, and production designer Mark
Friedberg. Both are very engaging. As you might guess, the
first track is more conceptual and thematic in its content, although
Lee and Schamus discuss their share of production details as well.
The second track is far more technical, but no less interesting, especially
for those who want to learn something about filmmaking. Also included
is an interview with Jeffrey Wright (14:44), in which the actor
succinctly discusses the attraction to and challenges of the character
of Holt.

This release of Ride With the Devil presents Ang Lee's director's
cut of the film. It's ten minutes longer than the theatrical
release, but since I haven't seen that version, I can't comment
on how this cut differs from it. But I can say that this version
of the film is fully deserving of the new life on DVD it has received
from The Criterion Collection. This vibrant, character-driven
adventure tells an unusual story while tussling with difficult, important
themes. Technically proficient and consistently gripping, Ride
With the Devil will reward repeated viewings. Highly recommended.