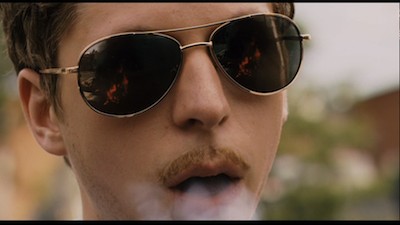 It's amazing how much resonance a teen movie can have. It doesn't matter how far away you get from high school, you can still watch a movie about a 16-year-old kid and say, "Man, that's just like what happened to me." It's how I felt watching Youth in Revolt. The adolescent experience is universal and self-replicating.

Youth in Revolt stars Michael Cera as Nick Twisp, a guy who has an unfortunate name and knows it (and will tell you so). Nick is an imaginative but awkward young man who listens to Frank Sinatra, dreams about girls, and plans to write novels one day. His mom (Jean Smart) is a barely there parent who dates a loser (Zach Galifianakis) because he doesn't mind her stretch marks, and his dad (Steve Buscemi) seems nice enough, though there is no explanation how he scored a hot girlfriend in her twenties (Ari Graynor, the underrated comedic actress who stole the show in Nick and Norah's Infinite Playlist).

After the loser boyfriend sells a lemon of a car to a bunch of sailors, the family gets out of town, visiting an out-of-the-way lakeside trailer park in the California mountains. There Nick meets the girl of his dreams. Sheeni Saunders (Portia Doubleday, Bram Stoker's The Mummy) is a big fan of Jean-Paul Belmondo, long letters sealed with wax crests, and manipulating boys into doing what she wants. Her pretentions are right up Nick's alley, and they form a kind of relationship, until Nick has to go back to Berkeley. Determined to return to his lady love, Nick concocts a plan to get his father to move to Sheeni's town and also get himself kicked out of his mom's house. Sheeni doesn't believe Nick has a rebellious spirit, and he's not sure either, so he invents one, adopting the name of her fantasy future French boyfriend. So, enter Francois Dillinger, a moustachioed, smoking doppelganger.

This is the hilarious conceit of Youth in Revolt, that Nick carries on an ongoing conversation and competition with his own invented alter ego. So, Michael Cera fans get a double dose of Michael Cera, as the actor goads himself into arson, conspiracy, and actually getting laid. People carp on the fact that Michael Cera plays similar characters in all of his movies, but Youth in Revolt is proof that we're not yet sick of the once and future Scott Pilgrim, we're just sick of him being in bad movies. Cera's persona still works, and that awkward and geeky delivery still has plenty of room for more tweaking. Francois gives the actor an opportunity to both answer the criticisms and to parody himself. Yes, sir, he can play a bad boy after all. 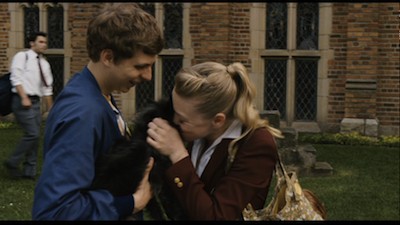 There's much in Youth in Revolt that I can relate to, and often, it seems like it's a movie tailor-made for me. A socially inept novelist trying to impress girls with his obscure movie rental choices, but who is also quick with a comeback? Check! A predilection for out-of-date music? Check! Animation sequences? Well, I didn't live 'em, but I love 'em, so Check! Even the girl who pushes a guy away as she reels him in. My female friend I watch movies with found Sheeni and all of her affectations a little over-the-top, but I offered the defense, "No way, that's my high school girlfriend." Thus, Youth in Revolt was painfully funny at times, hitting it on the nose in terms of emotional truth while taking the comedy to a place somewhere beyond. Like classic teen genre heroes such as Ferris Bueller and Parker Lewis, Nick Twisp gets away with more than he should, but hey, why the hell not? There's no point in any author, filmmaker, or actor having a fictional do-over if their stand-in heroes didn't.

Youth in Revolt is based on a much beloved novel by C.D. Payne. I haven't read it, but I know some folks who swear it's epic, and they felt that the Youth in Revolt movie was a nice try, but it didn't quite capture the aesthetic sprawl of the original. Well, the book must be something fantastic, then, because I was completely caught up in the film and was laughing throughout (especially at great cameos by Ray Liotta as a dirtball cop and Fred Willard as a dippy activist neighbor). The movie is directed by Miguel Arteta, best known for indie hits Chuck & Buck and The Good Girl, and written by Charlie Bartlett-scribe Gustin Nash. It's got just the right combination of absurdism, commentary, and genuine heart--all things that speak to the teenage mind. You know how ridiculous everything is and you want to tell everyone about it because you realllllly mean it, man!

Given the tepid box office response to Youth in Revolt, I don't see the picture ever taking on a Bueller-sized audience, but I could easily see it taking a spot alongside other cult faves of the teen genre, such as my favorite The Chocolate War. It has the right kind of quirks and an unflinching assessment of screwed-up adolescent life so any misfit kid that finds it should experience some affinity with the material; likewise, its wit means it won't go out of style just because it--or you--get a little older. This one is a fun surprise just waiting to be discovered. 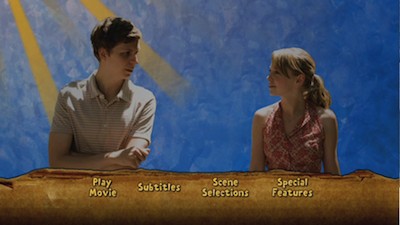 Video:
The DVD transfer for Youth in Revolt is anamorphic, 1.85:1. It looks great, with excellent colors and no problems with fuzzy resolution or image damage.

Sound:
The 5.1 Dolby Mix is also very good, with some solid interspeaker effects and a good balance between audio elements.

There are both straight English subtitles and English Closed Captioning available. 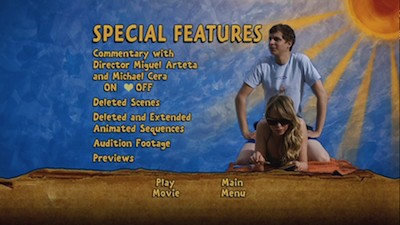 Extras:
The full-length audio commentary with director Miguel Arteta and star Michael Cera is kind of dry, though the conversation does keep going and the two have a good rapport. The commentary features mainly reactions to the minutia of what they are seeing on screen. Fans of the book might enjoy when they discuss why they made certain changes and how they actually tried different things to stay closer to the text that didn't quite work on screen. It's also interesting to hear how they rewrote dialogue and improvised on set (such as the dirty repartee at the French school).

There are nine deleted scenes, just under 11 minutes. As can be expected, these range from short dialogue trims (Sheeni and Nick talking about sex outside the church; making a plan of attack with Vijay) to more substantial scenes (alternate negotiation techniques about Albert and Trent; more with Zach Galifianakis, including a claymation sequence; an extra scene with Lefty; a conversation with dad while on shrooms). It's actually a pretty decent collection of cuts, a surprise for what is normally just a cursory extra these days. Deleted and extended animation sequences run just over 7 minutes, and they are what they sound like. The one deleted bit is a silent look at the phone-come-to-life that we just saw with dialogue in the deleted scenes.

There are five audition tapes (7 minutes, 40 seconds), featuring Portia Doubleday and Erik Knudson ("Lefty") reading with Cera, and Zach Galifianakis (strange and hilarious--why would they choose to test him with the trailer park bartering scene?), Jonathan B. Wright ("Trent," reading from a portion of the script that only ended up in the deleted scenes), and Adhir Kalyan ("Vijay") performing with a casting director.

There are trailers for several recent theatrical releases also on the disc, and a Blu-Ray commercial, but no trailer for Youth in Revolt.

FINAL THOUGHTS:
Criminally ignored in theatres, Youth in Revolt on DVD is a fun romp through the adolescent Id. Michael Cera stars in the adaptation of C.D. Payne's popular novel, bringing to life the repressed Nick Twisp and his rebellious split-personality Francois Dillinger. The actor is a perfect choice, and this is an excellent vehicle for him, allowing him to both play up and play on his reputation for goofy and awkward. It's a love story, it's a journey of self-discovery, and it's a love letter to one of the most confusing times in all of our lives. Highly Recommended. 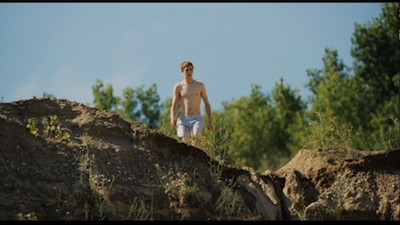