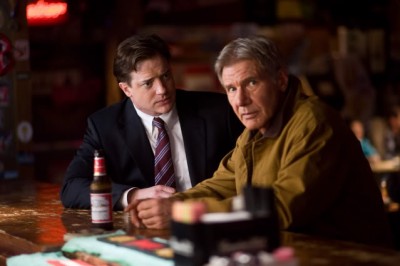 Like a lot of made-for-TV movies,
Extraordinary Measures (which was released theatrically) fails to
live up to the compelling true story it was based on. Taking a
real-life tale of struggle and triumph over a debilitating disease,
and forcing it into a conventional three-act structure jam-packed with
all manner of clichés, Extraordinary Measures is leeched of
reality's unpredictability and the precarious life-or-death stakes
that the participants faced.

John Crowley (Brendan Fraser)
is a Portland, Oregon, pharmaceutical executive with a charming wife
(Keri Russell), living in his own suburban paradise. However,
two of his three young children suffer from Pompe disease, a genetic
condition that erodes the muscles and nerves of its victims. The
two younger Crowleys are not expected to live past age 9. But
John is determined to seek a cure for the disease. He contacts
Dr. Robert Stonehill (Harrison Ford) at the University of Nebraska after
reading some journal articles by Stonehill that detailed his research
on enzyme therapy. Their relationship has a rocky start.
Stonehill is cranky and abrupt, prone to impatience. Content to
work alone but wary of receding grant support, Stonehill agrees to enter
into a partnership with Crowley to develop a drug to treat Pompe disease.
Forming a corporation is a challenge, but it comes as no surprise when
Crowley and Stonehill finally reach success.

It's an odd shame that "disease
of the week" films have such a stigma attached to them - that they
have a tendency to take some of life's most challenging, arduous,
gut-wrenching experiences, and plop them into a mundane formula.
Extraordinary Measures could have been made thirty years ago; the
way it's constructed and written is no different from decades of similar
films. The fact that this story found studio support as a theatrical
release is all the more strange, given its subject matter, although
that may be attributable to the star power of its cast.

As Crowley and Stonehill, Brendan
Fraser and Harrison Ford do fine. Both perform earnestly against
the rather unchallenging material; I'd venture to guess that Ford
rewrote most of his lines, as they stand out as having a different quality
than those of the other characters. Fraser and Ford in conversation
almost sound as though they are acting in two separate films.
Still, both actors try hard to overcome the clichéd limitations of
the material and make their characters come alive.

Interesting supporting actors
such as Russell, Jared Harris, Patrick Bauchau, and Courtney B. Vance
are thrown away in thankless, one-dimensional roles. The script,
by Robert Nelson Jacobs, just doesn't trust in the characters enough,
relying far too heavily on the circumstances of the disease-driven plot
to propel the story. Director Tom Vaughn seems at a loss as to
how to add anything of value to the film. It's visually static
and dialogue-driven, in keeping with the conventions of the genre.

There's nothing flat-out
bad about Extraordinary Measures; the worst that can be said
about it is that its predictability renders it boring. The storytelling
is just plain lazy, as evidenced by lines like this one (spoken by Fraser):
"This isn't about a return on some investment - this is about
kids!" True stories are often fumbled by filmmakers unwilling to
take a leap of faith in adapting the material to film; no doubt there's
a wellspring of humanity at the heart of Crowley's and Stonehill's
story. But the movie doesn't work to find it, relying on a bloodless
sequence of events to telegraph the significance of the two men's
achievements. This otherwise interesting story is likely better
covered in the nonfiction account by Geeta Anand, The Cure, upon
which the film is based.

The enhanced 1.85:1 transfer shines. Although not as rock-solid
as one would like, the image is pleasing. Bright daytime scenes
show good contrast, with darker scenes betraying a small amount of break-up
in the details. A nice job.

This dialogue-driven film has a fine, workman-like Dolby Digital 5.1
surround track that is well-mixed if not terribly active. Music
is occasionally present to liven things up, but there are few surround
effects other than mild ambient ones.

A handful of Deleted Scenes (9:27), a short piece called
Meet John Crowley (4:34), and a behind-the-scenes featurette,
Extraordinary Measures: The Power to Overcome (10:43), don't add
too much of value to the film, but they are nice to have.

Extraordinary Measures, as its numb title might suggest, is a
pretty lifeless film based on a remarkable story. In the lead
roles, Fraser and Ford are appealing, and their fans will likely enjoy
the film as far as their performances are concerned. Otherwise,
the movie is far from challenging, and only intermittently engaging.
Rent it.