AnimEigo // R // August 24, 2010
List Price: $24.98 [Buy now and save at Amazon]
Review by Stuart Galbraith IV | posted August 13, 2010 | E-mail the Author
Imagine this - it's the fall of 1980 and the downtown movie palaces-turned-grindhouses, for a time spared the wrecking ball thanks to the sudden popularity of martial arts movies made in the wake of Enter the Dragon (1973), now with few exceptions have closed forever. These same movies, heavily edited and horribly panned-and-scanned, were starting to turn up on TV, exiled to UHF channels, but these movies were from Hong Kong, Taiwan, or the Philippines generally - rarely were they Japanese. You might have caught Seven Samurai when it aired on PBS, or a revival of Yojimbo on some college campus, but in those days when cable TV was in its infancy and VHS and Betamax were luxuries few could afford, Japanese swordplay movies were otherwise next to impossible to see.

But then all at once, within just a few weeks of one another during October and November 1980, flashing swords suddenly were everywhere. The miniseries Shogun is a pop culture phenomenon, Akira Kurosawa's comeback film Kagemusha is getting rave reviews and, in the midst of those high-profile releases comes a very strange, awesomely violent patchwork entitled Shogun Assassin. A radical reworking of not one but two Japanese movies combined into a single action-filled extravaganza, Shogun Assassin floored audiences with its dream-like, poetic action and pressure-cooker bloodletting.

In the years since, both films from which Shogun Assassin was derived - eleven or so minutes from Lone Wolf and Cub - Sword of Vengeance (Kozure Ōkami - Kowokashi udekashi tsukamatsuru, 1972) and the rest from Lone Wolf and Cub - Baby Cart at the River Styx (Kozure Ōkami: Sanzu no kawa no ubaguruma, 1972), the second film in the same series - have been released to home video in their original form, uncut and in Japanese. And yet the Americanized Shogun Assassin has maintained its own special following, and with good reason. Along with the cleverly westernized Godzilla, King of the Monsters! (1956), it's probably the best example of radically altering an Asian movie while retaining its essential appeal. Several of the changes made for the American version even improve upon the original and are downright ingenious.

Appropriately, Shogun Assassin is AnimEigo's initial foray into the Blu-ray realm. It's an exceptional release, featuring an excellent high-def transfer that blows away all previous official and bootleg versions (as made clear in a restoration demonstration included as an extra feature) plus there are a couple of new supplements in addition to the original DVDs extras. 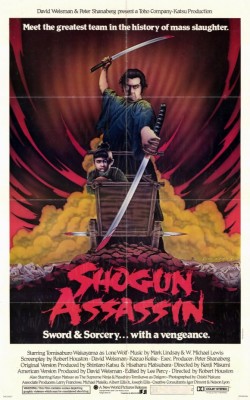 To say the least, Shogun Assassin's complex political backstory has been whittled down to its bare essentials. I'm not certain the main character, Ogami Itto (Tomisaburo Wakayama, voiced by prolific TV-movie director and former radio actor Lamont Johnson), is ever called anything other than the "Shogun's executioner" or "my father" in this version. In any case, as the story opens executioner Ogami* protests his corrupt Shogun's injustices and, after Ogami's wife is brutally murdered in response and faced with either apologizing or committing seppuku, he chooses a third option, abandoning his master and becoming an assassin-for-hire ronin.

But Ogami is now also the widower father of a toddler son, Daigoro (Akihiro Tomikawa), and so wanders the countryside pushing a wooden baby cart that's like something out of The Flintstones but which is also secretly equipped with hidden swords and other gadgetry a la James Bond's iconic Aston Martin. Most of Shogun Assassin is derived from the second "Lone Wolf and Cub" film, but its plot about the Shogun trying to corner the market on indigo dye (!) was jettisoned and consists almost entirely of the Shogun's top assassins trying but never quite succeeding in killing swordmaster Ogami.

Most memorable among the villains are Sayaka (Kayo Matsuo, voiced in the American version by Sandra Bernhard), the beautiful but cacklingly mad leader of a band of female ninja, and the Three Masters of Death (Akiji Kobayashi, Minoru Oki, and Shin Kishida; one of whom is voiced by Marshal Efron), who brandish unique and deadly weapons: an iron claw, spiked-studden gloves, and a mace.

The extreme violence in Shogun Assassin was a response to declining movie attendance in Japan, which by the time the first "Lone Wolf and Cub" movie was made Daiei, the original studio, when bankrupt one day while star Wakayama and his famous younger brother, actor-producer Shintaro Katsu, were on location, shooting the film. Both it and Katsu's "Zatoichi" film series ultimately moved to Toho but within a few years even those series ran for cover in the medium of series television. After Daiei went bankrupt, Nikkatsu switched to soft-core porno films while Toho and especially Toei's movies upped the violence, nudity, and general salaciousness of their productions. Equally important though rarely noted, a large percentage of the new chanbara and crime films being made were also based on popular manga, in this case the work of Kazuo Koike, whose stories have been adapted into myriad films, television series, and anime.

The "Lone Wolf and Cub" movies were actually exhibited in the United States in their original form prior to Shogun Assassin, not long after their release in Japan, but distribution was generally limited to Japanese-American neighborhoods on the West Coast and Hawaii, and possibly Times Square grindhouses in dubbed form. However, Shogun Assassin was for many Americans their first exposure to this kind of picture, and its over-the-top graphic bloodshed shocked and delighted audiences.

There are many memorable scenes: as a demonstration of their prowess, the female ninjas gleefully hacking a male counterpart to a limbless, lifeless torso; an ambush by the lady ninjas, hiding their blades in daikon (large Japanese radishes); a mesmerizing scene with cold-blooded killer Sayaka, who reaches for her sword to kill Ogami, only to hesitate when Daigoro touches her breast, triggering an unexpected maternal instinct; rebels attacking the Shogun's men, their army hidden in the sand dunes under the cover of tatami mats.

Despite simplifying its story, the shrewd American producers wisely retained much of Koike's lyricism and many in the audience were surprised by the film's pictorial beauty. American genre films, particularly those produced in the decade prior to Shogun Assassin's release, were rarely made with such attention to mise-en-scene. Genre master Kenji Misumi and cinematographer Chishi Makiura, both of whom worked primarily in Daiei's period film series, give these quickly-made, modestly-budgeted movies the same professional sheen Japanese filmmakers routinely gave all their movies, regardless of budget or genre.

The biggest improvement made by the American producers was the addition of an intelligently written narration spoken by the child Daigoro (Gibran Evans) and a strange but effective electronic score.

The filmmakers may have been inspired by Linda Manz's narration of Terrence Malick's Days of Heaven (1978); it has the same flatly-spoken but authentic and hauntingly delivered quality of that film. The use of a real child instead of hiring a woman to do the child's voice (usually the case with English-dubbed Japanese productions) or a professional child actor (who would have sounded rehearsed) helps enormously. The score, replacing the unusually ineffectual one by Hideaki Sakurai, adds to Shogun Assassin's hypnotic quality. Co-written by former Paul Revere and the Raiders lead singer Mark Lindsay for Moog Modular synthesizer, it's like a cross between something that might underscore a Charles Bronson Cannon-period thriller and an Iron Curtain sci-fi epic from the early-1960s. It's a weird, incongruous sound but it works marvelously well.

AnimEigo reconstructed Shogun Assassin in 1080p high-def 2:35:1 using HD masters from the two original film versions. The U.S. version may have used two stock shots of castles because at 00:00:37 and again at 00:08:31 are fleeting establishing shots obviously sourced from a greatly inferior video master. However, these last but a few seconds - the rest of the film looks outstanding with excellent color, despite some scratches to the original negative, with wonderful detail in the sets, costumes, and on the actors' faces, and with a pleasing film grain throughout that doesn't resort to DNR tweaking. The mono audio (English only with no subtitle options) is pretty solid as well. The disc is region "A" encoded.

Supplements include an older, informative audio commentary by Asian film scholar Ric Meyers and martial arts expert Steve Watson. The leisurely track discusses the state of the Japanese film industry when the series was made, background on the director and star, identifies what's what from the two movies and other changes made for this Americanization, and so forth. A new track features producer David Weisman, graphic designer Jim Evans (who did the poster) and his son Gibran, the voice of Daigoro. It's an interesting commentary detailing the Americanization process.

Hardcore martial arts movie fan Samuel L. Jackson appears in a high-def interview, in which he charmingly comes off nothing more or less than an enthusiastic, obsessive fan. The effect is something like chatting with a fellow conventioneer in a hotel lobby at the San Diego Comic Con.

Also included is a slightly reworked trailer for Shogun Assassin (the final title card with the original distributor has been changed) but it's in high-def. Also included are AnimEigo's usual detailed liner notes providing cultural and historical background.

Just as it was back in 1980, Shogun Assassin serves as an excellent introduction for those new to the chanbara genre. The transfer is superb and the solid extra features put the film into context. A DVD Talk Collector Series title.

* The character's name in English is usually given as "Ogami," but "Okami" in Japanese.