Cinema Guild // Unrated // August 3, 2010
List Price: $29.95 [Buy now and save at Amazon]
Review by Chris Neilson | posted August 19, 2010 | E-mail the Author
The final sheep drive into Montana's Absaroka-Beartooth mountains is the subject of Lucien Taylor and Llisa Barbash's 2009 documentary Sweetgrass. Competition from cheap imports and increased operating costs have compelled the Allesteds, a Norwegian-American ranching family that has had a permit to graze their sheep on federal land since 1900, to go out of business, but these worldly matters which would be the focus of a documentary like The Farmer's Wife or Food, Inc. are only eluded to here. Sweetgrass isn't that kind of documentary, but neither is it an overly-sentimental, cuddly animal documentary like March of the Penguins. Instead, Sweetgrass blends the ethnographic filmmaking pioneered by Robert Flaherty with the observational vérité filmmaking of Frederick Wiseman. 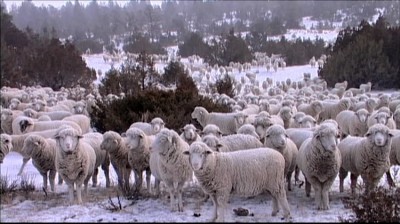 Taylor and Barbash, a husband-and-wife team, conceived Sweetgrass while teaching anthropology at the University of Colorado in 2001. Shot over the course of three years, and edited during the subsequent six, Sweetgrass objectively captures the end of a way of life without incrimination or pandering. No narration, interviews, or music are used, and the only onscreen text appears just before the closing credits.

Sweetgrass opens during early spring on the Allested Ranch. Sheep are sheared and lambs birthed. The hard-earned experience of the hired hands is conveyed through their economy of motion and taciturnity. More than a quarter hour passes before any conversation occurs, this being a shopworn joke about dumb cowboys that earns a perfunctory laugh from the circle of cowboys who've probably all had their turn telling a variation of the same joke over the years.

When the air warms and the pastures green, the Allesteds and their cowboys saddle up horses, pack mules, prepare their dogs, and begin the 75-mile push of 3000 sheep to the high pastures of the Absaroka-Beartooth Wilderness. The success of the sheep drive depends as much on the memory of the older sheep to recall the way to the verdant Alpine meadows as the efforts of the drovers and dogs to get them there.

Once the sheep reach their destination, just two cowboys are left to shepherd them through the summer -- John, a laconic, grizzled old-timer; and Pat, his loquacious younger cousin with the look of a Marlboro Man, but not yet the stoic fortitude of a veteran cowboy. For John, mouths are made for eating bacon, drinking coffee, and smoking cigarettes, but rarely for talking. If John is aware of Pat's loneliness he doesn't let on.

The way of life carefully recorded in Sweetgrass of cowboys sleeping under old canvass tarps thrown over felled Aspen poles, living on coffee and meat roasted on a fire, while shepherding stock in a remote Alpine pasture seems unchanged from that of a bygone day, until the jarring appearance of a modern technology such as a two-way radio or cell phone puts the lie to the reverie. The most affecting scene in Sweetgrass is also the most surprising for its incongruity: Pat, after a particularly bad day, calls his mother on a cell phone and breaks down recounting his unhappy circumstances.

As green fields wither to brown in the late summer sun, the Allesteds and their cowboys begin the 75-mile return drive. Again, thanks as much to the sheep eager to get home as to the efforts of the drovers, the annual return drive is completed, but now for the final time.

Presentation
Video & Audio:
Sweetgrass is presented in anamorphic widescreen (1.78:1). Unfortunately, however, because it was recorded on consumer-grade DV, the image quality is frequently unequal to the grandeur of the landscape.

5.1 and 2.0 Dolby Digital audio options are provided. Thanks to the liberal use of multiple lav mics throughout, and good field and post mixing, an immersive sound environment is crafted. The limits of the audio recording are generally only demonstrated when dialogue is occasionally too muddled to be understood. Despite the strong regional accents of the participants and the occasional poor recording, no subtitle options have been provided.

Extras:
Extras include a booklet featuring an essay from film critic Robert Koehler, an hour of additional scenes, a photo gallery, a trailer for this and twelve other Cinema Guild releases, and most notably, a commentary with filmmakers Llisa Barbash and Lucien Taylor. The commentary track provides welcomed explanation of how the film was made, clarification about ambiguous material, and scholarly insights putting the film and its subjects into context.

Final Thoughts:
Viewers hoping for a political diatribe or a sentimental documentary about cuddly animals should look elsewhere, but those able to appreciate a spare, observational, ethnography about a vanishing way of life will be richly rewarded for their attention. Sweetgrass is highly recommended despite the less than ideal image quality.