Diamonds of the Night

Second Run // Unrated // May 10, 2010 // Region 0 // PAL
List Price: £12.99 [Buy now and save at Co]
Review by Chris Neilson | posted May 26, 2010 | E-mail the Author
The Czech New Wave classic Diamonds of the Night (Démanty noci, 1964) is a study in minimalism. Though based on a conventional novella written by Holocaust survivor Arnošt Lustig, first-time filmmaker Jan Němec stripped the screenplay down to the bone. Excised are the protagonists' backstories save for a few repeated snippets of wordless images. Gone also is nearly all the dialogue. What remains is a story of two nameless, nearly wordless, young concentration camp escapees on the run, chased by the authorities and a posse of old men. 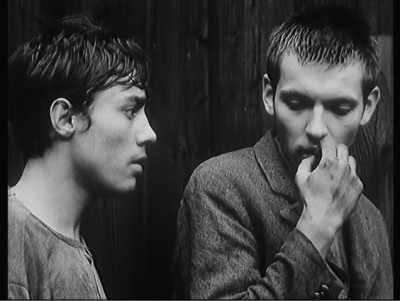 With no more than twenty lines of dialogue retained, the viewer is compelled to intuit the story almost entirely through visual cues. The film begins with the protagonists, two teenage boys, sprinting up a wooded hill with gunshots ringing out behind them. Seemingly exhausted, the boys crash through the woods, repeatedly stumbling and falling. Filmed handheld by a cameraman who sometimes follows and sometimes pulls even with the boys, the effect is to remove the distance between the viewer and the protagonists. We are not detached observers watching them from the comfort of our couches, but comrades in peril.

Once beyond the immediate danger of the initial pursuit, our protagonists seek sustenance. A lengthy but unspecified period elapses (at least one day, perhaps more) before a fateful encounter at an old German farmstead. As the viewer, we accompany the bolder of the famished boys as he barges into the farmhouse kitchen to confront a middle-aged woman home alone. Unexpectedly, the boy unleashes his murderous and libidinal desires, or seems to, until we realize that these images are of thoughts not deeds. Four times we see the boy strike the woman and after each attack we see her body lying in an increasingly more sexually-suggestive heap. But we also repeatedly see her not dead, not hurt, and probably not touched, giving the lie to this fantasy. In reality, the inscrutable woman appears to render the boys aid giving them milk and bread, but perhaps she also thereafter raises the alarm enabling a posse of old men to successfully hunt the boys down.

Once caught, the boys are led by the old men to their summary executions, but again perhaps not. The final images are of the boys running through the woods once more, and we are left to decide for ourselves whether they have suddenly and unexpectedly been released or escaped, or whether this is just another wish or delusion of desperate boys in their final moments.

Presentation
Diamonds of the Night has been released from the UK-based boutique DVD label Second Run on a single-layered DVD which is PAL-encoded but not region restricted.

Video & Audio:
This release features newly restored video and audio. The original 1.33:1 aspect ratio is retained, and optional English subtitles are provided. The high-contrast black and white image is visually pleasing despite some apparent damage to the source materials. The monaural audio is flat, but likely completely faithful to the original recording.

Extras:
The extras consist of a booklet with a new essay by film historian Michael Brooke about this film and career of Jan Němec more generally as well as production notes. A 20-minute appreciation by film programmer Peter Hames appears on the disc as well, as does a stills gallery.

Final Thoughts:
Forty-six years later, Diamonds of the Night remains as challenging as ever. This minimalistic, 68-minute feature puts the onus on the viewer. The story is slight, the dialogue is minimal, and the perspective is subjective and open to interpretation. For viewers ready to engage with difficult material, Diamonds of the Night is recommended.