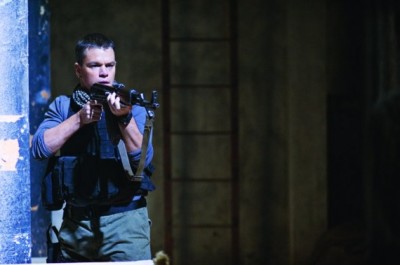 Director Paul Greengrass applies
his consummate technical skill and capacity to crank tension to untold
levels to a new story about the Iraq War in Green Zone.
A competent thriller, the film moves quickly, never pausing for breath,
but in the process it does some odd things with the film's nonfiction
source material. "Inspired by" the book Imperial Life in
the Emerald City by Rajiv Chandrasekaran, Green Zone jettisons
the book's impressive research and engagingly sardonic tone, and adopts
the narrative trappings of the three
Bourne films.
Indeed, the source material may as well have not even been mentioned
- this is, through and through, a fictional story without any basis
in real incidents whatsoever, and its supposed connection to a nonfiction
book is just a sleazy misdirect that artificially inflates the film's
relevance. In a way, this attempt to "legitimize" the film
by tying it to the work of a reporter eerily echoes the prewar justification
for the war itself.

This issue is obviously irritating
to me, but when I set it aside, Green Zone is a competently-made
thriller that is consistently entertaining and well-acted by a diverse
and talented cast.

Matt Damon plays CWO Miller,
the leader of a squad assigned to locate hidden caches of WMDs in post-invasion
Baghdad. Stymied repeatedly by bad intelligence, Miller begins
to question the military's source, a highly-placed Iraqi code-named
Magellan. A CIA operative working in Baghdad (Brendan Gleeson)
perks up at Miller's questions and begins working with him to covertly
identify Magellan and, perhaps, learn the truth about whether or not
WMDs exist in Iraq. Along the way, Miller runs up against an inquisitive
reporter (Amy Ryan) who was the first to legitimize Magellan by printing
his assertions in a major US paper - thereby giving credibility to
the government's case for war. Meanwhile, Pentagon representative
Clark Poundstone (Greg Kinnear) is working furiously to locate Magellan
for other, more sinister reasons.

Damon is earnest, direct, and
serious as Miller; he lends real weight to the role. Miller came
to Iraq with a straightforward mission: to locate WMDs. Unable
to find them using the military's intel, he wants to know where they
are and what the flaws are in the intel. So he sets out in an
equally straightforward manner to find out.

The supporting cast is excellent.
Although their roles are a bit under-written, Gleeson and Ryan are,
as always, a lot of fun to watch, as is Kinnear. Jason Isaacs
appears, briefly and effectively, as a thuggish Special Forces operative.

Greengrass channels his considerable
skills and turns a solid procedural script by Brian Helgeland into a
propulsive thriller. And yet Greengrass can't completely solve
the major gaping story issue, which is the conspiratorial nature of
the "secret" of the WMDs. As we all know, there were no WMDs.
The lies that were told about them were always plain and obvious.
Therefore, it seems strange that a film would opt to create a shadowy
conspiracy story to explain something that was always right out in the
open, in the light of day. There's a disconnect here between
what we all know actually happened and the way the movie chooses to
portray it. Why create a fictional explanation for something that
has been so well documented?

To the credit of the filmmakers,
this question was not obvious until after the film ended. It moves
so quickly and is so effective in generating suspense that there was
hardly time to register confusion or criticism.

Universal's enhanced 2.40:1 transfer is solid and impressive.
It's a very dark film, with extended nighttime sequences, and the
blacks hold up remarkably well. Detail is good, and contrast excellent.
A very nice transfer of a dark, delicately-lit film.

The main Dolby Digital 5.1
surround track makes excellence use of ambience and very punchy surround
effects. Firefights are appropriately explosive, with good bass.
The movie is sonically active in general, with music by John Powell
(though always present) taking a backseat to dialogue and sound effects.
There are Spanish and French 5.1 tracks, as well as a stereo Descriptive
Video Service track in English.

The bonus features begin with a Commentary from Greengrass
and Damon. Recorded together, they share anecdotes and production
details in a conversational, easy-going way. It's a decent track,
if not exactly thrilling. Deleted Scenes (12:28) are available
with or without Greengrass and Damon commentary; some of these are fairly
interesting, although the director's justifications for excising them
are understandable. Matt Damon: Ready for Action (9:48)
doesn't go far beyond EPK fluff, and neither does Inside the Green
Zone (8:53). Both are interesting, but don't offer a huge
amount of insight.

An expertly-crafted thriller,
Green Zone can't avoid a couple of important pitfalls, including
flaws in the story's underlying logic and its assertion of a factual
basis. But it certainly works as diverting entertainment, thanks
to confident direction and an excellent cast. Recommended.