Real Story: Escape From Alcatraz, The 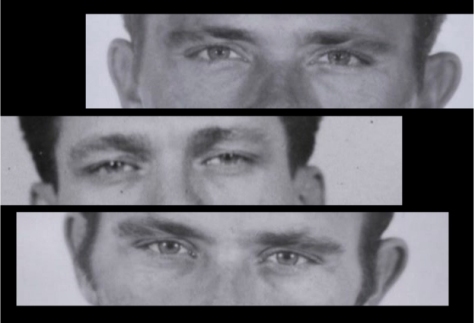 San Francisco's Alcatraz Island has been many things during the past few centuries: a lighthouse area, a military camp, a military prison, a federal prison, a Native American occupation and, most recently, a recreational area and popular tourist attraction. Since its days as a military and federal prison (undoubtedly, the island's most famous "identity"), Alcatraz was known as "the inescapable prison"; in fact, most of the convicts sent there had a history of escape attempts at their prior locations. The prison closed its doors in 1963 due to the high cost of maintaining the facility, as well as the pollution it created in the surrounding San Francisco Bay. One year before its closing, however, something unusual happened: three prisoners fled the prison grounds and made it into the Bay, prompting a massive manhunt in and around the cold waters. None of the three prisoners were ever found---but since the success of such an escape was unlikely, the FBI's official position was that they drowned before reaching land.

The three prisoners seen above are John Anglin, Frank Lee Morris (portrayed by Clint Eastwood in 1979's Escape From Alcatraz, which dramatizes this escape) and John's brother, Clarence Anglin. Morris was widely credited as the brains behind the operation, but FBI testimony from a fourth man (Allen West, who planned to escape with the others but didn't make it in time) indicates that he helped out with much of the planning. The Smithsonian Channel's The Real Story: Escape From Alcatraz discusses lesser-known points like this, but its main promise is to recreate their escape to establish a firmer conclusion as to their potential success. At only 46 minutes it length, The Real Story has quite a challenge ahead: not only have almost 50 years passed since the event, but Mythbusters covered this territory back in 2003 (and came to a different conclusion, even).

Oddly enough, the actual investigation doesn't begin until just after the 30-minute mark; before that, the prisoners are introduced, the stage is set and their carefully-planned escape is carried out, courtesy of several tastefully-reenacted scenes. Along the way, we also hear retrospective thoughts from folks like Jolene Babyak and John Martini (Alcatraz historians), Pat Mahoney and Bill Long (Alcatraz guards at the time), Darwin Coon (an inmate during the escape) and Monte Hall (former FBI investigator)---and for the most part, their comments help to establish a fairly accurate context of what might have transpired in and before the events of June 11, 1962. Much of the footage---including the interviews---is also shot on location, which helps. The ridiculously clever plan of Morris, West, and the brothers Anglin is mapped out during a 15-20 minute stretch, and it's here where The Real Story is the most engaging, enjoyable and genuinely informative.

But that's not the documentary's main objective, if its lofty title is indeed accurate...and unfortunately, it's the actual investigation that comes up a bit short. To be fair, we're given plenty of probable cause to back up The Real Story's conclusion that the escapees didn't make it: the time-appropriate currents of San Francisco Bay are analyzed, weather conditions are taken into account, and their crude materials (which included a homemade raft created from stolen raincoats) are rebuilt and tested in the nearby waters. In all cases, it's shown that the three men had a very, very small chance of survival...but without any hard evidence, this is still a documentary without a definitive conclusion. It's a lot less anti-climactic than, say, The Mystery of Al Capone's Vault---and more than anything else, it just suffers from a lofty title, that's all. The Real Story: Escape From Alcatraz is still a watchable documentary, but don't expect a hard-hitting tell-all and you'll enjoy it just fine.

Smithsonian's DVD release is unfortunately a bit thin, however: the technical presentation is slightly flawed and bonus features are non-existent, which ultimately makes this release more of a rental candidate than a blind buy. Let's take a closer look, shall we?

Presented in its original 1.78:1 aspect ratio, The Real Story: Escape From Alcatraz has not been enhanced for 16x9 displays; doubly disappointing, since the film begins with a "Smithsonian Channel HD" logo. Aside from this glaring error, however, it's tough to complain: the limited production budget still looks fairly impressive, from vintage photos (which are cropped, unfortunately) to newly-recorded interviews and reenacted scenes. The documentary's natural color palette is also preserved nicely, and even the darkest scenes tend to avoid murkiness and digital noise. Overall, this is certainly a good-looking presentation---but with a lack of anamorphic enhancement, the score can't help but look a bit low on paper.

In the audio department, The Real Story: Escape From Alcatraz is a bit more consistent...but that's not a surprise, since the large majority of this audio was recorded recently. The film is presented in your choice of Dolby Digital 5.1 Surround or 2.0 Stereo, and both mixes get the job done: music, dialogue and narration rarely fight for attention, while the rear channels are lightly used to create mild ambience. Surprisingly, optional English SDH captions are provided during the main feature, which is certainly a nice touch. 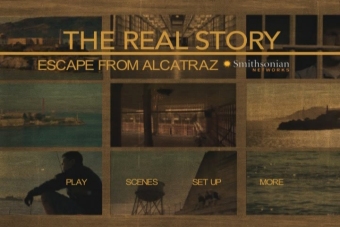 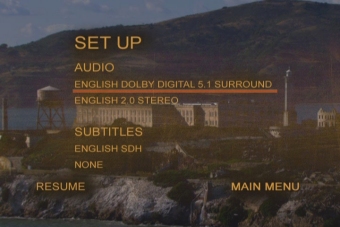 Seen above, the attractive but static menu designs are basic and easy to navigate. Our 46-minute main feature has been divided into just under a dozen chapters, while no obvious layer change was detected during playback. This one-disc release is housed in a standard black keepcase and includes a no inserts of any kind.

Bonus Features
Nothing here, save for a dozen or so Previews for current and upcoming Smithsonian releases; these are also presented in non-anamorphic widescreen, though Closed Captions and subtitles are not offered this time around. I can't say that the lack of bonus features is a total surprise...but at under an hour in total length, this package will be a tough sell on running time alone.
Final Thoughts

Taken on its own terms, The Real Story: Escape From Alcatraz is a brief but accessible documentary that fans should enjoy. However, it never quite delivers what the trumped-up title promises us: there's simply not enough time devoted to the actual investigation, and what's here is barely enough to sway most viewers one way or the other. In any case, there's not enough meat in this DVD release to encourage a blind buy, even at such a low price point: the technical presentation is decent but slightly underwhelming, and a complete lack of extras doesn't help matters either. Overall, interested parties who didn't catch The Real Story: Escape From Alcatraz on The Smithsonian Channel should give this a weekend spin at the very most. Rent It.