Entertainment One // Unrated // September 28, 2010
List Price: $59.98 [Buy now and save at Amazon]
Review by Stuart Galbraith IV | posted October 24, 2010 | E-mail the Author
In a few minutes, this man is going to be murdered. Who killed him? Was it his son? The faithful secretary? Her fiancé? The cheating business partner? The needy nephew? The gold-digger? Match wits with Ellery Queen, and see if you can guess Who Done It!

A unique and extremely enjoyable mystery series unaccountably canceled after just one short season on NBC, Ellery Queen (1975-76) was developed by writer-producers Richard Levinson and William Link, and is up to the same high standards of their greatest success, Columbo. I remembered the series with great fondness but hadn't seen it since its original run, yet was pleased to find that it's even better than I recalled.

Twenty-two hour-long episodes (plus a 90-minute pilot) are pretty hard to syndicate but are just about ideal as a DVD set, and Entertainment One's (formerly E1) Ellery Queen Mysteries offers excellent transfers, a useful booklet and a smattering of other extra features. For mystery fans this is a most welcome release. 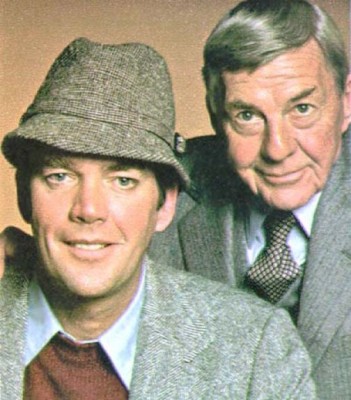 Based on the Ellery Queen novels, credited to Queen himself but in fact written by Brooklyn-born cousins Frederic Dannay and Manfred Bennington Lee (in turn the pen names of Daniel Nathan and Manford Lepofsky), the TV series was the last movie or television version to date among many featuring the character, and by all odds far and away the best.

Set in New York City in the late-1940s, Ellery Queen stars Jim Hutton in the title role, as the famous but unassuming and absent-minded mystery writer whose amazing powers of deduction are frequently mined by his widower father, police Inspector Queen (David Wayne).

The series was unusual and unique in myriad ways. The unusual device everyone who ever saw show remembers has Ellery Queen breaking the fourth wall just prior to the dénouement, looking into the camera and addressing the audience directly, going over the facts of the case, pointing to clues and inviting them to figure things out. Though initially startling, it's a device that works remarkably well thanks to Hutton's performance and his character's utter lack of ego. Unlike Sherlock Holmes or Poirot, Ellery Queen never expresses a superior attitude toward suspects and rivals, and actively encourages the viewer to see the simple solutions to the various mysteries.

Also unlike most mystery novels, movies, and TV shows, Ellery Queen fell into the category of "fair play": the viewer is given access to the same clues as the novelist-sleuth, and the mysteries are essentially solvable. There is a bit of fudging, but the solutions are usually quite logical if often improbable and observant viewers have a reasonable shot at identifying the murderer.

This was the polar opposite of the 60-75 minute mysteries Hollywood's B-units cranked out during the 1930s and '40s, which in terms of story generally were as inscrutable as Charlie Chan. Otherwise, Ellery Queen is directly and nostalgically patterned after that particular form. Though still cursed with Universal's assembly-line television house style, there's clear evidence that Levinson and Link were after a '40s (and specifically '40s Manhattan) ambiance that effectively comes across most of the time. The art direction and photography is still limited to a TV budget, but good use is made of Universal's backlot and various standing sets.

The pilot film, Too Many Suspects, is overlong (these kinds of stories work better with running times of 50-70 minutes) but beautifully establishes the chemistry between Hutton and Wayne, and Ellery and his inspector father*. It's almost the reverse of the erudite sleuth / bumbling associate relationship one usually sees - Holmes and Watson/Holmes and Lestrade, Poirot and Hastings, etc. - Ellery's father is intelligent and organized while his son is somewhat scatterbrained, so engrossed in the moment (writing a novel, solving a crime) that he's oblivious of daily chores, social obligations, or sleep. Inspector Queen respects and admires his son's sleuthing abilities, but also gently navigates Ellery through life. It's a sweetly-defined relationship that seems more the work of Levinson and Link than Dannay and Lee, whose Ellery was first conceived (in 1928) as a pince-nez wearing, Harvard educated snob, though he became more likable by the 1940s.

Hutton and Wayne are perfectly cast, despite a complete non-resemblance to one another. Jim Hutton was on the cusp of major stardom throughout the 1960s, headlining throwaway comedies like The Horizontal Lieutenant (1962) and Who's Minding the Mint? (1967) but also supporting bigger stars like Cary Grant (in Walk, Don't Run), Charlton Heston (Major Dundee), and John Wayne (The Green Berets, The Hellfighters). Very tall (6'5") and lanky, Hutton very much resembled a younger Jimmy Stewart and had a similarly halting delivery - as well as the same unpretentious charm. Like a few other actors of his generation (Robert Lansing is another that comes to mind), it's amazing Hutton didn't become a huge star. After Ellery Queen's cancellation Hutton did a bit more TV, then soon after died of liver cancer at just 45. Son Timothy memorably, tearfully dedicated his Best Supporting Actor Academy Award (for Ordinary People) to his late father some months later.

Wayne had been a star on Broadway (Finian's Rainbow, The Teahouse of the August Moon), including originating the Hutton-esque role of Ensign Pulver in Mister Roberts. He concurrently appeared in a wide range of films, from Adam's Rib (1949) to the rarely seen remake of M, playing Peter Lorre's child-killer role. He reemerged somewhat following his excellent performance in The Andromeda Strain (1971) and after this starred on the problem-plagued House Calls series, several memorable episodes of St. Elsewhere, and later still as Rue McClanahan's father on The Golden Girls following the death of Murray Hamilton - who guest-stars on an early Ellery Queen.

Other series regulars (or as regular they could be in just one season) include stuffy radio personality Simon Brimmer (John Hillerman), police Sgt. Velie (Tom Reese), and Front Page-style reporter Frank Flannigan (Ken Swofford). All three really get into the spirit of the thing, especially Swofford.

How could it possibly fail? Scheduling may have been a factor: the show aired Thursday nights at 9:00pm opposite the more popular Streets of San Francisco on ABC, while The CBS Thursday Night Movie (back when the popularity of network airings of recent movies was peaking) had a strong lead-in with The Waltons.

I suspect the NBC/Universal and/or Levinson & Link may also have erred in selecting the first episode to be broadcast, "The Adventure of Auld Lang Syne." It's a clever show - the victim, fatally stabbed in a phone booth, uses his last moments to dial an apparently total stranger - but the story, with Ellery stuck in traffic on New Year's Eve, keeps him away from the crime scene until literally the last few minutes of the show. In a way, it's quite daring: he finally arrives, asks a few simple questions and - Snap! - murder solved. But it doesn't introduce the character well.

Ellery Queen Mysteries are packed into a somewhat flimsy but otherwise well-designed fold-out box, with the pilot and 22 episodes (neither time-compressed nor edited, from what I could tell) spread over six single-sided, dual-layered discs. The transfers are very clean and bright, presenting no problems, and the mono audio is fine, as are the English SDH subtitles, though no alternate audio is included.

Included is an 18-minute interview with co-creator William Link (Levinson having passed away in 1987); it's entertaining if not all that enlightening. A handy 22-page reference guide includes full-color photographs, good essays by Janet Hutchings (editor of Ellery Queen's Mystery Magazine) and Andrew Gulli (The Strand Magazine), along with a detailed episode guide noting airdates, major credits and which quotes each episode's prologue narration.

* The pilot also features Henri Mancini's "Mystery Movie" theme, which as far as I know is absent from all home video and syndicated editions of Columbo, McMillan & Wife and other NBC Mystery series.