Joseph Campbell on the Power of Myth with Bill Moyers

Athena // Unrated // September 21, 2010
List Price: $49.99 [Buy now and save at Amazon]
Review by Chris Neilson | posted September 14, 2010 | E-mail the Author
Time was when PBS had the power to turn obscure scholars into national celebrities. In 1990, Ken Burns' series The Civil War catapulted the critically-respected, but generally-unknown historian Shelby Foote to fame and fortune. Two years earlier, similar acclaim was bestowed posthumously on professor emeritus Joseph Campbell following the airing of a six-part series of interviews with him conducted by Bill Moyers entitled Joseph Campbell and the Power of Myth. Though Campbell had died of esophageal cancer several months before the series aired, the resulting acclaim for the series prompted a best-selling accompanying book of the transcripts, and tremendously boosted sales for Campbell's older books on comparative mythology and religion, especially his seminal work, The Hero with a Thousand Faces, first published in 1949.

Over the course of six hour-long episodes, noted journalist Bill Moyers and Joseph Campbell discussed spirituality in its myriad manifestations from religious traditions which have passed into myth to those which still command adherents by the hundreds of millions. Campbell was convinced that all these belief systems were manifestations of a common human urge to seek out the transcendent creative force from which all mater originates and to which all mater will return. Because this transcendent creative force is beyond the limits of human comprehension, mankind attempts to understand this force through metaphors -- fables about divinities, sacred places and objects, and supernatural events. All religious fables are poetic parables intended to teach adherents the path to the good life.

In their wide-ranging discussion, Campbell argued that all religions endeavor to bring their adherents closer to the same ultimately unknowable, transcendent power. To the extent dogma varies among religions, the differences are attributable to the historical circumstances of the various religions' origins. Religions which thrive over geographic and temporal distances do so because they are more accommodating to changed circumstances, but Campbell would still rather that the Abrahamic religions were even more open to swifter change.

Departing from the dogma of any particular religion, Campbell urged viewers simply to follow their bliss. By this he did not mean to give into frivolous hedonism, but rather that everyone should identify what they feel truly passionate about and focus their efforts accordingly. In so doing, the community as a whole will be benefited via the collective improvement of its members. 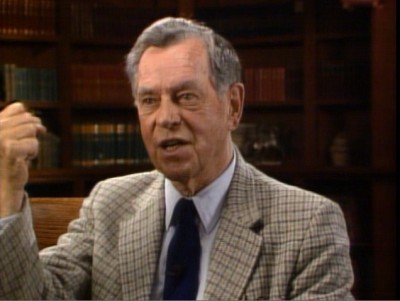 The six episodes were filmed in 1986 and 1987: five were recorded at George Lucas' Skywalker Ranch, north of San Francisco, with the final episode recorded in New York City at the American Museum of Natural History. Except for brief, but frequent, footage of religious works of art and sacred rites, the video is simply of Moyers and Campbell sitting facing one another while conversing. Commendably, Campbell is allowed to speak at length without interruption, but unfortunately, the film editors chose to create a false visual dynamism by frequently cutting to Moyers looking intrigued. Were the effect employed only occasionally it would be forgivable, but the constant repetition is tedious.

Presentation
Aired on public television countless times in the late '80s and early '90s and frequently given away on VHS tape during PBS pledge drives for years thereafter, Joseph Campbell and the Power of Myth is being released on DVD for the second time in North America. This latest release comes from Acorn Media's Athena label, a brand targeted at lifetime learning, in a handsome standard-size cardboard slipcase containing two discs in individual slimline cases.

Video & Audio:
Joseph Campbell and the Power of Myth is presented in its original aspect ratio of 1.33:1. Shot on video, and made for television, the series shows its age. Images are generally soft due to low video resolution.

The stereo audio is in keeping with the video. The audio is always of sufficient quality to understand the dialogue but is often slightly muddled and subject to noise such as tape hiss. Optional subtitles are provided.

Extras:
Extras spread across both discs include photo galleries of series' images (7 min.), navigable screens providing Bill Moyers' bio and on Campbell's influences, selections from a later Joseph Campbell video entitled Sukhavati (9 min.), an excerpt from an interview about archetypal character's in Star Wars (14 min.), and an appearance by Campbell on Bill Moyers' Journal from 1981 (25 min.).

Final Thoughts:
Campbell's lack of faith in an anthropomorphic God will no doubt disturb some viewers, but his charm, intelligence, infectious joie de vivre, and abiding faith in the essential goodness of humanity should be sufficient to engage open-minded viewers. Joseph Campbell and the Power of Myth is highly recommended.