Facets Video // Unrated // September 25, 2007 // Region 0
List Price: $29.95 [Buy now and save at Amazon]
Review by Chris Neilson | posted July 12, 2010 | E-mail the Author
Greek filmmaker Costa Ferris's 1983 feature Rembetiko is one part national epic, one part populist melodrama, and one part musical showcase. Through a highly-fictionalized biography of folk singer Marika Ninou (1922-1957), Rembetiko follows the fortunes of Greece from the evacuation of more than a million resident Greeks from Asia Minor in 1922 following the nation's defeat in the Greko-Turkish War, through the Axis occupation in World War II, and the subsequent civil war. 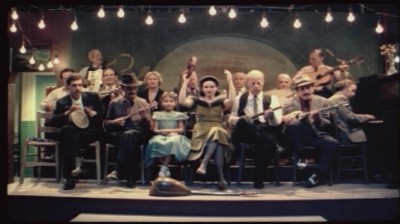 Marika (played as an adult by Sotiria Leonardou) is the daughter of itinerant musicians who fled to the slums of mainland Greece from Asia Minor following the Greko-Turkish War. While still a young girl, she sees her drunken father pimp her mother and then kill her when she falls for her John. Orphaned following the arrest of her father, she follows an equally calamitous path. Taking up with a traveling performer who abandons her when she gives birth to a daughter, Marika goes from one misery to another before she herself is senselessly murdered in 1957.

As national epic and populist melodrama, Rembetiko isn't very successful. The sense of national epic is conveyed through vintage archival footage and poorly-produced scenes of too-few local extras in ill-fitting Nazi uniforms blundering through street scenes as best they can, while the populist melodrama about the sad life of Marika Ninou relies on overdone emoting, pandering salaciousness, and contrived plot elements to paint its woebegone tale that bares little resemblance to truth.

Where Rembetiko shines though is as musical showcase for Rembetiko (also known as Rebetiko) music. Referred to as the "Greek Blues", this amalgam of diverse musical forms springs from the urban slums of Greece. Songs of exile, poverty, violence, heartache, drugs and drink are sung with accompaniment by a troupe of stone-faced musicians playing the bouzouki, baglamas, oud, violin, and tambourine, sitting stiffly on a small stage before a cafe audience of equally down-and-out patrons.

The musical numbers are as numerous as they are splendid. While musicians wander off stage to fornicate, give birth, have a breakdown, or kill themselves backstage, the performances continue onstage, allowing Ferris to fit a great deal of wonderful music in around the melodrama.

Originally released internationally in a 101-minute cut, this special edition features the restored 150-minute domestic cut. To the extent that this restored version provides more music, it's much appreciated.

Presentation
Video & Audio:
Facets provides multiple warnings on the packaging and before the feature that this release features the best source material available. Viewers should be prepared for dirt, scratches, poor resolution, and color issues, but beyond even that it seems that some material shot in 1.66:1 has been stretched to 1.78:1 for this anamorphic widescreen release.

The 2.0 Dolby Digital soundtrack has some dynamism, but sounds more brittle and tinny than one would hope for a musical such as this.

Extras:
The only extra provided is a booklet with a bit about the origins of Rembetiko music and the bio of filmmaker Costa Ferris.

Final Thoughts:
This release of Rembetiko would benefit greatly from a way to select only the musical numbers, but even as is, the greatness of the performances is enough to warrant viewing despite the lesser attempts at national epic and populist melodrama.