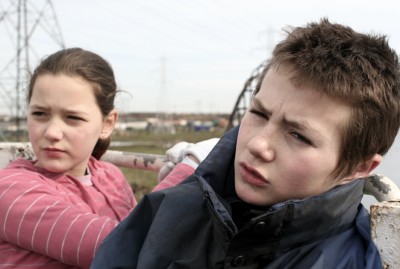 Minimalism is wielded masterfully in Lance Daly's "Kisses," an unexpectedly tart juvenile drama that trusts in the emotional purity of life. Short (70 minutes) but keenly aware of economic filmmaking decisions, the picture is a mood piece in the vein of a Ken Loach or Shane Meadows experience, though coated with a more musically poetic touch that assists in the picture's lopsided hold on whimsy.

Living in a bleak Irish housing development, pre-teen Dylan (Shane Curry) is dealing with his violently abusive father, who drove away his older brother years earlier. Dylan's only friend is Kylie (Kelly O'Neill), a neighbor girl with her own set of troubles, primarily a fear of further sexual abuse at the hands of her uncle. When Dylan wounds his father during a heated row, the boy barely escapes the house, taking off to Dublin with Kylie, with both kids hopeful to shed their troubles and start anew. With a wad of Christmas money to share and limitless energy, the pair hit the streets, quickly understanding their limited life experience might leave them vulnerable to the darkness of the city.

Daly doesn't retain any rigid dramatic impulses with "Kisses," electing for an elastic observational route, illustrating two toughened children working their way through the expanse of Ireland to find shelter in Dublin, meeting strangers and making friends as they hunt for Dylan's lost brother. It's a film for a wanderer's spirit, with marvelous cinematography communicating the wonder and danger of this passage. To help underscore Dylan and Kylie's transformation along the way, Daly has employed specific visual cues: the picture opens in icy black and white, slowly bringing in warmth through color as the two inch further away from home, taking a spiritual purpose of sorts. It's subtle, but effective, playing comfortably into the picture's overall quest to wallow in mood.

While concerning the inner life of youngsters and their feisty desire to reclaim their lives, "Kisses" is not a family film. This is a gloomy picture with pockets of fanciful detours and travel montages (scored movingly by GoBlimpsGo), but assumes an overall feeling of abandonment, observing the kids trying to find a safe haven in a chilling city. Armed with a prickly vocabulary (spat out with butterscotch elegance by O'Neill) and a fresh pair of Heelys to help scoot around the area, Dylan and Kylie make the best of their situation, but it's only a matter of time before the demons lunge for them via a few violent encounters and a chase sequence that leads the pair into a strip club. The toxicity of the Dublin nightlife makes a strong point about the children: are they better off on the streets or in the supposed comfort of their own homes?

Music also plays a key part in "Kisses," as Dylan learns the allure of his name through the music of Bob Dylan and his various fans and impersonators (Stephen Rea pops up for a cameo). A strange tangent for the director, but it feeds easily into the rest of this disarming, warmly fashioned brush with freedom.