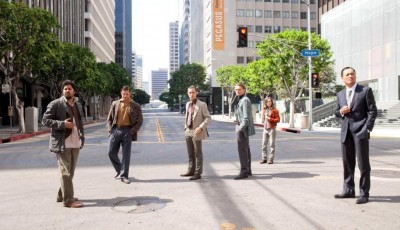 Between "Batman" movies and taut thriller exercises such as "Insomnia," writer/director Christopher Nolan likes to muck around with the minds of his audience. He enjoys the sport of deception, poking around the confines of unreality to fashion complex illusory puzzles that demand the utmost moviegoing attention. You'd be a fool to even blink. "Inception" is Nolan's Fat Man mind-bomb; it's a lavishly byzantine thriller, dripping with layers upon layers of subconscious excavation, attempting to wrap viewers up in a heist-like adventure to help swallow the complex dreamscape machinations. It's a bold, stunning feature of impossible technical virtuosity. It also has the tendency to be about as emotionally stimulating as a college lecture.

Dom Cobb (Leonardo DiCaprio) is a mental "extractor," plugging into foreign minds through "shared dreaming" to retrieve items hidden deep within the folds of the subconscious. With Robert Fischer (Cillian Murphy), an evasive businessman who's heir to a financial kingdom, Dom is handed a difficult target to infect, requiring the services of a team to help him through the entangled dream world. With "point man" Arthur (Joseph Gordon-Levitt), "architect" Ariadne (Ellen Page), "forger" Eames (Tom Hardy), and "tourist" Saito (a barely intelligible Ken Watanabe), the group slips into their sleeping minds to manufacture a way to retrieve what's being kept inside of a safe in Fischer's head. For Dom, the job is especially difficult, with torturous memories and appearances from his wife Mal (Marion Cotillard) helping to complicate the job at hand, placing the group in immense danger as new levels of the subconscious are accessed. 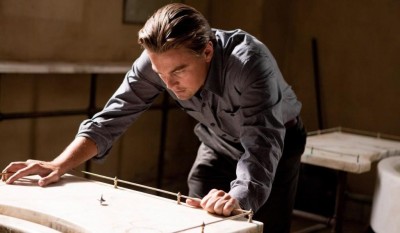 What is reality? It's a question "Inception" delights in picking apart, as Nolan forges a film directly devoted to expanding the finer points of perception. Ambitious doesn't even begin to describe the picture, and it's always interesting to observe the filmmaker working his way through a troublesome, strenuous concept, with "Inception" a kissing cousin to Nolan's 2000 picture, the time-twisting "Memento." Nolan's masterful with this type of psychological bath, delighted with the opportunity to bend reality and pull his writing inside out, manipulating screen elements to create a puzzling whole. "Inception" allows him 150 minutes to create as much uncertainty as he can.

Of course, there's also something approximating an action movie to tend to, featuring the director conducting an explosive symphony of the unreal, setting Dom and the gang loose in an artificial world where anything is possible. Diving through levels of lucid dreaming, the spectacular screen highlights begin to pile up with astonishing usage of complex and superbly detailed special effects, bringing to life the gravity-defying work of the team, who find themselves jumping further into Fischer's head to elongate time (mere seconds in the real world lasts hours, months, and years in the dream world), as panic sets in when Mal comes to disrupt Dom's burning concentration. Despite the screenplay's commitment to abstract arenas of confrontation, the visual elements here are expansive and inventive, taking cues from "The Matrix " and M.C. Escher to create a contorted enigma on a majestic widescreen scale. 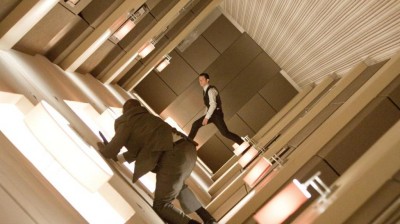 To keep "Inception" at least approachable, Nolan maintains a steady influx of exposition to clarify the dreamland surroundings. This is a complex and charged feature, but it's also unbelievably verbose, electing to explain every trip to the brain in laborious detail. The chatter has a nasty way of disrupting the flow of the feature, with much, if not all of the first half devoted to discussion and uninspired explanation, keeping the picture dangerously monotone as everything is spilled in a clunky fashion that betrays the imposingly esoteric visual impression. Nolan aims to position viewers in a place of comfortable confusion, but to achieve that difficult posture, he robs "Inception" of outrageous pace and invigorating character transitions, draining the story of emotional involvement (Dom's red-faced struggle with Mal is key here, but doesn't reverberate as intended). Every character is saddled with nonstop questions in this script; after an hour of unbroken chatter, it seems as though Nolan might've fallen asleep as well.

"Inception" is a challenging film with a dynamic range of illusions, but it's utterly cold to the touch, paranoid about losing the audience, yet staying aloof to the bitter end. Nolan and puzzle purists should have a blast with the sheer intricacy of the film, but to anyone else about to strap in for what seems like a rocket sled of delicious bewilderment, keep in mind that "Inception" often prefers articulation to demonstration.