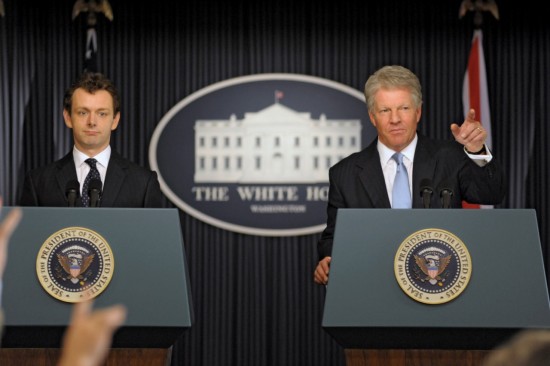 The Special Relationship,
written by Peter Morgan and directed by Richard Loncraine, concludes
Morgan's "Blair Trilogy" of films, and expands HBO's string
of historical films that zoom in on pivotal periods in the lives of
world leaders. Morgan's loose trilogy began with two films directed
by Stephen Frears: The Deal, for British Television, and The
Queen, which was released theatrically and for which Helen Mirren
won the Oscar (among several other awards and nominations for the film).
In all three movies, British Prime Minister Tony Blair was portrayed
by Michael Sheen, who effectively captures Blair's charm, energy, and
chilly, C-3PO-like precision.


The Special Relationship takes its title from the longstanding
friendly diplomacy between the United States and Great Britain. The
title takes on additional significance in terms of the personal and
professional friendship between Tony Blair and Bill Clinton (played
here by Dennis Quaid). Morgan and Loncraine's film selects particular
passages from the mid-to-late 1990s, when Blair and Clinton served in
the highest offices of their respective nations. Beginning with a visit
by Blair to the US to gain campaign insights from Clinton's advisers,
the story is told mostly from Blair's perspective, following the new
PM through his first face-to-face meeting with Clinton, and on through
a variety of crises - notably, the Lewinsky scandal and the decision
to invade Kosovo.

There is an interesting transition that occurs in The Special Relationship
that makes the film work as a character-driven story, and allows for
a discomfitingly ironic coda. First we see the eager Blair, swallowing
Clinton's political advice with admiring credulity. As the Lewinsky
scandal erupts, and after Blair is mildly slighted once or twice by
the president, the PM gains the courage to stand up to Clinton on the
subject of Kosovo, eventually forcing the president to support an invasion.
The Lewinsky and Kosovo crises gave Blair extremely high public approval
ratings - on both sides of the Atlantic - and infused the PM with confidence
and even a feeling of superiority. The irony of the film's coda, of
course, lies in our knowledge of the extremely low approval ratings
Blair faced after developing another presidential relationship - with
Clinton's successor.


The film - and Sheen in particular - handles this transition with skillful
aplomb, especially in the way it infuses historical incident into carefully-shaped
scene-by-scene character dynamics that chart the parallel progress of
both the people involved and the events being portrayed. This is done
with extreme economy without feeling too much like a pile of dramatic
shortcuts. Sheen's expert portrayal tracks Blair's gradual increase
in savvy and tactical ability. As Clinton, Quaid is equally effective.
The actor proves surprisingly capacious, adopting Clinton's moodiness
and physicality in a way that goes well beyond impersonation.

Loncraine's strength is the way he steadily tells this complex story
with such speed. In just 90 minutes, several years and a handful of
major historical events have been effectively glossed, while keeping
Blair's point of view at the forefront of the narrative. Loncraine evokes
recognizable but sensitive performances out of a small, focused cast
that includes Hope Davis (as Hillary Clinton), Helen McCrory (reprising
her role as Cherie Blair from The Queen), and Mark Bazeley (as
Alastair Campbell). This tight direction, Morgan's bullet of a script,
and careful but naturalistic performances place The Special
Relationship well above the average film released anywhere this
past year.

This new film looks excellent on DVD. The enhanced transfer is
very solid, with outstanding contrast. The 5.1 is very nice, evenly
balanced, with good use of sound and sound effects. The score by Alexandre
Desplat is noteworthy, doing much to move the film through passages
in time and changes in the dynamic of the Blair/Clinton friendship.
It's not a speaker-buster by any means, but it's an active, enveloping
track, especially for a movie that's generally quiet.

Just a brief promo piece for
the film. That's it.

The Special Relationship
is very short - maybe too short given the scope of its story.
But the actors are excellent and the economy of the filmmaking on display
is impressive. It's a convincing historical double portrait.
The movie calls out for bonus content, and the DVD is sorely lacking
in that department. Recommended.