"There are few things more fundamentally encouraging and stimulating than seeing someone else die." 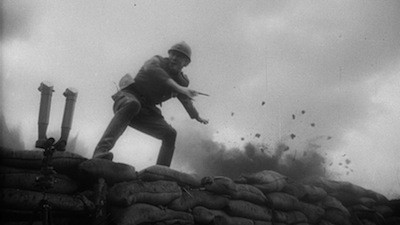 Stanley Kubrick's 1957 anti-war film Paths of Glory is a movie that should fail to move no one. I daresay it's one of those films that forever changes a person. There is not having seen it, and then there is having seen it, and the two states are totally different. I suppose suggesting that there is no one among us who would not be touched by Paths of Glory is a bit much, but the movie demands we not adopt a cynical view of our fellow man. All said and done, we must accept that there is something deep down that is fundamentally right in our basic DNA.

Paths of Glory is one of those gamechangers I found when quite young, glimpsed on some station or other as a high schooler constantly on the lookout for good movies. I should have marked the day my father put cable in my bedroom, as that was an important day. Paths of Glory came at the right time, when I was starting to think about politics, starting to understand there was a greater message in history. Like any teen, I was ready to question authority, and the morality play depicted here shows one how to do that in an even-handed, dignified manner. It's not rebellion without a cause, though perhaps it's no more effective for having one.

This World War I drama was based on a novel by Howard Cobb, and the screenplay was written by three different scribes: Kubrick himself, the great Calder Willingham (The Strange One, Thieves Like Us), and the astonishing Jim Thompson (better known as the novelist who wrote The Grifters and The Killer Inside Me). It stars Kirk Douglas as Colonel Dax, an officer in the French army who fights alongside the troops in the trenches and who approaches his job with reason and logic. The crux of the story is an attack on a German stronghold referred to as "the Anthill." It's an impossible task, one that even Dax's glory-hungry superior, General Paul Mireau (George Macready), knows is hopeless, but the promise of another star on his collar blinds him to the risks. Dax even tries to refuse, but he goes along rather than be relieved of his command and leaving his men unprotected.

The script for Paths of Glory essentially follows a three-act structure. The first act is the preparation for the siege on the Anthill and then the disastrous run into No Man's Land. The troops can barely advance past their own line, and when Mireau's orders to shell his own trenches in order to push the grunts forward are ignored, he is left with egg on his face. Act Two is his attempt to wipe the egg away, calling on one man from each regiment to be brought up on court martial, charged with cowardice. Dax attempts to defend them as best he can, but fails, and Act Three is what happens on the way to the firing squad.

Paths of Glory is a pitch-perfect piece of drama. It's remarkable in its simplicity. There is no extraneous scene, no off-key moment. The dialogue crackles, and the mis-en-scene moves with precision and confidence. There are many remarkable sequences in the movie, most famous of which is the charge on the Anthill. Kubrick and his d.p. George Krause and camera operator Hannes Staudinger take the audience down into the trenches, and then they haul us over the top, racing through the bombs and the bodies and leading us right through the thick of combat. Yet, there are smaller moments too. Look at how the camera moves in the very brief fist fight between Paris (Ralph Meeker) and Arnaud (Joseph Turkel), the way the action swings with the fighters, and compare it to the way we dance with the officers a short time later when the Generals throw a party for themselves. Behavior inspires technique.

More striking, though, are Kubrick's still compositions and his use of the full image frame. Many of the important scenes are set up with characters in the foreground, middle ground, and back, each important to the moment, and the arrangement establishing that importance. Kubrick takes full advantage of the depth of field, balancing his wide shots with extreme close-ups, punching in for the fullest possible impact. As an actor, Douglas also gives as much as he can. Just watch his face when Kubrick gives him the whole screen to work with. He makes every nervous twitch count. (And trust me, you will see that clearer than ever on this Blu-Ray; see below.)

The best part of Paths of Glory, however, is how the writers make the underlying meaning and the human tragedy at the center of the story seem as effortless as everything else. The situations are presented as they are without needless emphasis on right or wrong. Just as action dictated shooting style, so too do characters dictate how the narrative progresses. The way we get to know the men informs us as to where our loyalties should go. For instance, the contentious relationship between Corporal Paris and the incompetent Lieutenant Roget (Wayne Morris) causes us to consider that the best of the best aren't always in charge, and it mirrors the relationship of Dax and Mireau. And Dax's practicality is put up against the way the ranking officer, General Broulard (Adolphe Menjou), values protocol over common sense. None of these characters need to spend time making speeches, what they are trying to achieve provides soapbox enough.

Paths of Glory maintains its hard exterior even as the hardships mount. If the attack on the Anthill seemed insurmountable, it has nothing on the kangaroo court Dax would find his men tangled up in. Yet, even as Kubrick decries war, he maintains a very modern point of view: he exonerates the good men who fight it. He doesn't see them as being without flaw, but rather as doing the best they can in the face of absurdity and all the more admirable for it. I think the final scene of the film--which I will not describe in any depth here, in case you have never seen it--befuddled me as a young man, but now it strikes me as absolutely perfect. It is like a flower blooming on a scarred battlefield, a reminder to all of us that as large as life may loom, men (and women) will always find their way back to some kind of common ground. Somehow, the goodness of the human spirit can never be tamped down completely. There will be war, but there will also be survivors, and they will pick up and carry on. 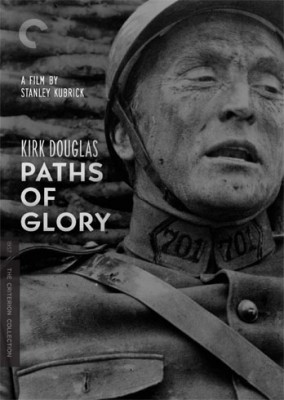 Video:
The new 1080p image on this Criterion Paths of Glory BD far exceeds expectations, improving light years on the previous DVD release from MGM. First and foremost, the 1.33:1 aspect ratio on that disc is discarded in favor of the correct 1.66:1 frame, which opens up the image so we can see those spectacular Kubrick compositions in full. The black-and-white image has a remarkable level of contrast, playing with light and dark and bringing out a startling amount of detail, from the crags of dirt in the trenches to the shine on the marble halls behind the lines. There is a pleasing grain that mimics and preserves the natural look of the film stock, and overall, the print is free of any noticeable blemishes.

Sound:
Just as impressive is the uncompressed mono soundtrack. Newly remixed, it preserves the original audio, but the clean-up also works well in modern systems to give as much depth to what we hear as what we see. Don't just be wowed by the cacophony of the shelling, but give an extra ear to the courtroom scenes. Listen how the footsteps sound on the marble and the way the voices echo in the cavernous hall.

Extras:
Paths of Glory - Criterion Collection is packaged in a standard case, with a 16-page booklet containing photos, credits, a chapter listing, and a new essay by James Naremore.

The disc itself leads with a new audio commentary by critic Gary Giddins, which covers all aspects of the production and the story's historical origins.

Other supplements mainly focus on collecting archival materials and interviews featuring people involved with the movie. From the vaults are a 1966 audio excerpt with Stanley Kubrick (2:15) and a 1979 television interview with Kirk Douglas (29:30), whereas new interviews with Kubrick's regular producer Jan Harlan (just over 9 minutes), his Paths of Glory producer James B. Harris (just over 21 minutes), and actress Christiane Kubrick (just under 7 minutes), credited as Susan Christian for her important appearance in the final scene, add the perspective of time and distance.

History buffs will also like a short piece from French TV that looks at an actual case in WWI that partly inspired Paths of Glory.

Finally, there is a theatrical trailer. All of these extras have been put on this disc in HD.

FINAL THOUGHTS:
Highly Recommended. Another unmatched restoration of a classic film by Criterion. The Paths of Glory BD is an outstanding achievement, giving modern audiences a chance to see the earliest masterpiece of a one of cinema's most important filmmakers. This World War I drama stars Kirk Douglas as a conscientious colonel trying to keep his men alive both on the battlefield and off. With a smart script and an ambitious shooting style, Kubrick has made a rewarding war movie unlike any other. Packed with extras and sporting a beautiful new transfer, the Blu-Ray of Paths of Glory is a must-have.