Microcinema // Unrated // July 27, 2010
List Price: $19.95 [Buy now and save at Amazon]
Review by Chris Neilson | posted August 10, 2010 | E-mail the Author
First-time filmmaker Amy Grill's 2009 documentary Speaking in Code is a character-driven vérité exploration of the techno music subculture; conceived, created, and self-financed with her then husband David Day, a struggling techno promoter and DJ in Boston. Grill spent two years following a loose cadre of DJs, producers, and promoters attempting to balance their obsession for music with the demands of their personal lives. 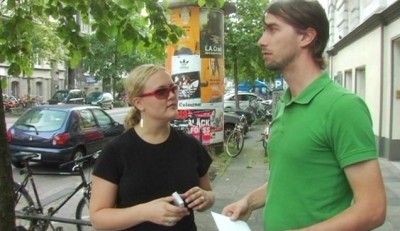 Speaking in Code isn't intended to be a history of techno, but Grill does provide just enough background for the outsider to contextualize the character-driven stories she's interested in: a fusion of European electronica and African-American dance music, techno emerged in Detroit and Chicago in the late '80s. Ironically, techno failed to take root on native soil, but was embraced in Europe, especially among the exuberant youth of post-communist Germany. Today, techno continues to provide opportunities for DJs, producers, and promoters in Europe, while enthusiasts in America are compelled to choose between moving to Europe or staying in America and continuing to work in relative obscurity for little money.

Grill's example of the discouraged American who leaves to follow the music is Philip Sherburne, a pop critic and journalist who relocates from San Francisco to Barcelona and later Berlin. Conversely, Grill's husband, David Day serves as the paragon of persistent American optimism.

Day is determined to build a viable techno scene in Boston. By day, he works at a small importer for obscure European and Japanese music labels, and by night he DJs, promotes shows, and organizes techno parties, but reality frequently falls short of his dreams. When Day flies in Modeselektor, a popular German DJ duo, to play the ironically-named "Enormous Room" in Cambridge, the disappointment of the DJs accustomed to performing before several thousand fans a night at European venues is palpable when then learn they'll been brought to America to play for less than a hundred.

While the Americans struggle with whether to persist in the United States or give in and move to Europe, the question faced by the European DJs that Grill follows is how to balance professional and personal lives. Gernot Bronsert and Sebastian Szary of Modeselektor seem to find an effortless balance, reveling in professional success, while starting families. In contrast, the professional partnership of Gabor Schablitzki and Sören Bodner who perform together as the Wighnomy Brothers is strained by outside relationships and professional misgivings that eventually splits the partnership.

The relationship visibly under the most strain though is the one between the filmmaker and her husband. The project that they embarked on together as an opportunity to share their mutual love of the music and to combine her filmmaking aspirations with his efforts as a promoter unexpectedly engenders conflict. For the first time, Grill tries to scrutinize Day as an outside observer might, and to objectively question him on camera about his plans. In response, Day begins pulling away from Grill, defensively questioning the cost of the self-financed documentary while increasingly keeping his aspirations and schemes to himself. At some point Day's withdrawal from the documentary becomes so pronounced that a major reversal and disappointment for Day is only revealed through a vague intertitle about "complications" with nothing further said about it by either Grill or Day.

The breakdown in the relationship between the filmmaker and her husband, the heretofore principal documentary subject, seemingly prompts further labored editing choices throughout the film's second half. Grill appears to sacrifice the film's previously linear structure to obscure the withdrawal of Day from regular participation, yet the most notable editing problem, failure to frame a concise narrative, can't be attributed to personal problems.

Grill and co-editor Jason Blanchard fail to tame the material. In the film's first thirty minutes, Grill introduces twenty-one interviewees complete with name, moniker, and title. Interviewee number 22, the UPS delivery driver for Day's 9-5 job goes unnamed, but his inclusion is as nonsensical as that of the rest of Day's colleagues such as Tim Leanse in IT, Kirs Price and Mike Uzzi in shipping, Billy Kiely in sales, or owner, Jimmy Johnson. If there's any purpose to this jaunt to Day's workplace or to other seeming digressions and fillers such as the six-minute closing titles sequence other than perhaps to eke out a feature-length runtime, it's difficult to fathom what it might be.

Presentation
Video & Audio:
Shot on MiniDV, Speaking in Code is presented in letterboxed widescreen (1.78:1). Images are soft and subject to motion blur, and colors bloom.

The audio outputs in stereo, but without any notable distinction between the channels. Dialogue is generally clear enough, but the music shifts between sounding underwhelming and overly distorted. Forced subtitles are provided where the recording was too soft or the accent of the speaker deemed too strong, but there are no optional subtitles on this release. 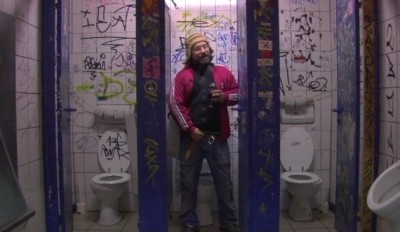 Final Thoughts:
Speaking in Code is a modest documentary which shows promise for first-time filmmaker Amy Grill, but suffers for lack of a concise narrative. Perhaps in the hands of an experienced editor, Grill's material might yet make for a fine example of intimate vérité filmmaking, but as is, it's difficult to recommend.