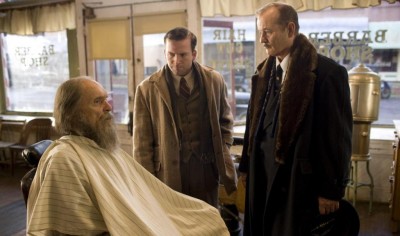 "Get Low" is a film that sneaks up on the viewer. Not exactly a comedy, not quite a full-blooded drama, it's a mood piece about grief and absolution, staged with a wandering, observational quality from gifted director Aaron Schneider. Maybe too cheerless for its own good, the picture retains the force of its outstanding cast, who feel around the textures provided by the filmmaker, submitting career-best work with a screenplay that encourages their immeasurable gifts for dramatic interpretation.

Hearing about the loss of an acquaintance, crusty hermit Felix Bush (Robert Duvall) is forced to confront his 40 years of rural isolation, brought on by a tragic event he refuses to discuss. Offering a considerable amount of wadded-up cash to buy a living funeral for himself, Felix hits up funeral parlor partners Frank (Bill Murray) and Buddy (Lucas Black) to help with the details. Creating a party for the old, ailing soul, the businessmen run into tremendous difficulty enticing a fearful community to show up for the celebration, finding Felix's troubling reputation difficult to play down. For Felix, the funeral is a chance to absolve himself of his sins, taking kindly to old friend Mattie (Sissy Spacek) as a way to reclaim his lost years.

There's an immediate sensation of time and place in "Get Low," brought to the screen with tangible love from Schneider. Set in East Tennessee during the 1920s, the film brings such compelling displays of woodsy isolation and small-town routine, it's almost a shame there has to be a story to block the view. "Get Low" has a tremendous feel for the elements, which often reinforce the moods of the characters, speaking for histories that aren't covered in the script. 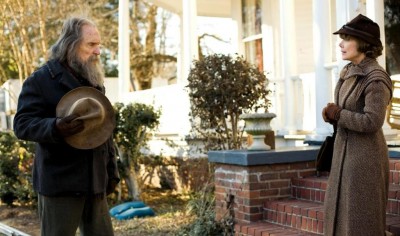 As lived-in as it appears, this is a tale of regret, and a convincingly internalized one at that, with the filmmaker softly shaping Felix's journey as a grunted plea for forgiveness, emerging from a man caged inside his own mind. The character has the outward appearance of a cheap joke (scraggily beard, soiled clothes, limited vocabulary), but Schneider spends the movie digging into Felix, illustrating a man emerging from solitude craving a final audience, welcoming comments from outsiders as a way to finally learn more about himself. Though the early going is devoted to mild comedy as Felix, Frank, and Buddy figure out a game plan, the majority of the film is mournfully contemplative, watching Felix nervously resist his own bright idea.

Duvall's performance as Felix is a superior force for Schneider to work around. The legendary actor proffers some of the most inspired work of his career here, with the character playing to his moaning, curt strengths, giving Duvall plenty of internal combustion to process. The results are heartbreaking and authoritative when Felix finally tests the weight of the world, beautifully played off the ensemble, with Murray also supplying the picture with a careful read of bewilderment. Spacek and Black bring addition dimension to the feature, while offering a biological sense of southern comfort.

"Get Low" droops some in the middle act, stopping to catch its wind, but never quite reclaims its former pace. The conclusion walks an assured tearjerker path, bringing Felix to a hypnotic boil, but the slackness of the second half holds the film down some -- a disappointing obstruction, but nothing that clouds the feature's overall effectiveness.