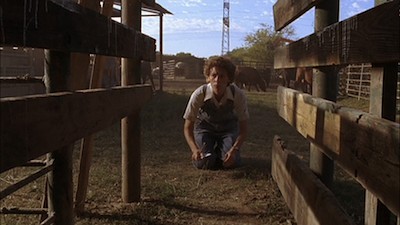 HBO's new biography picture Temple Grandin is a satisfying, touching look at an impressive life. Claire Danes stars as Grandin, an autistic woman who revolutionized how America treated its beef cattle and also how we understood what it meant to have autism. Her endeavors and accomplishments are truly extraordinary, and they make for a rousing example of human resolve.

The story picks up in the mid-1960s when Temple was preparing to go to college. Though the film eventually takes us back to her early diagnosis and the special teacher (David Strathairn) who helped her take the initial steps that would lead Grandin to her place in higher education, the filmmakers avoid the regular pitfalls of your standard biopic narrative structure. They don't get bogged down in early "formative" memories or contrived tragedy, but instead give us the practical details. Once the groundwork is lain, Temple Grandin picks up its own natural throughline: Grandin's research.

Temple Grandin's autism manifested as an ability to learn only in pictures. This makes the world one giant puzzle to her. She sees natural patterns in everyday things, and this leads to problem solving. She has a natural affinity for animals, and watching the cows and horses on her aunt's ranch relaxes her. This causes her to wonder about how the animals stay calm when being herded into situations foreign to them and ways that might apply to helping her cope with changes in her life. She builds a device similar to the "squeezing machine" that cattlemen use to keep a cow secure while they inoculate it. For Temple, this simulates the human contact she yearns for but is uncomfortable receiving. Her defense of this device is instrumental in her graduating with her bachelor's degree, and as a way to give back, she starts to think about how cows are treated on cattle yards and slaughterhouses. The cattle have eased her agitation, and she sees that repaying that favor would not only make life better for them, but it would make the process more efficient for the business owners.

Temple Grandin is based on a couple of books Grandin has written about her life. It is directed by Mick Jackson (The Memory Keeper's Daughter) and written by Christopher Monger (The Englishman Who Went Up a Hill But Came Down a Mountain) and William Merrit Johnson (In Treatment). In terms of an adaptation, the filmmakers have decided to show more than just the events of Temple Grandin's life by replicating how she thinks. Using various techniques, they superimpose diagrams on the world, create freeze frame snapshots of the information she takes in, and also create the fantastic connections she makes as her form of wordplay. For instance, when she's told that the profession of caring for horses and cows is called animal husbandry, she imagines a man marrying a heifer. It's the kind of mental game that any creative person engages in, but for Grandin its literal application can be as stifling as it is inspirational--such as when automatic doors remind her of a guillotine, limiting her options of places to enter. 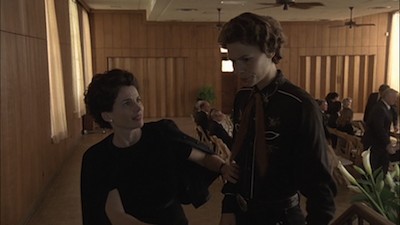 Claire Danes is remarkable as Grandin, taking what could easily have been a showy, caricatured performance and finding the truth and dignity of the real person. The prosthetic teeth and the halting way of speaking may be the outer expression of Grandin's autism, but they are minor tools in Danes' arsenal. Her best asset has always been her expressive face, and it is especially useful in portraying a person who cannot mask her emotions and thus often goes to the extreme. It takes a particularly sincere and careful actor to pull it off, and Danes quickly makes you forget the teen actress she once was and only see Temple in her place.

The supporting cast is also quite good. In addition to Strathairn, other major players include Catherine O'Hara as Temple's understanding aunt and Julia Ormond as her mother. Eustacia Grandin had a tough time raising Temple, as the only advice doctors gave in the 1950s was to institutionalize autistic children for the rest of their lives. They also accused the mother of being the source of the autism, suggesting that the condition was brought on by a the maternal figure at some point withholding her affection. Mrs. Grandin refused to accept her daughter not having the opportunity for a full life. Ormond plays her as brittle and sensitive. Having expended all her strength in keeping her daughter on track, she looks like she will shatter at the slightest touch--ironic given Temple's inability to connect and her own studies in soothing anxiety. When Eustacia finally gets the tribute and release she deserves, it's a real tearjerker.

Temple Grandin is a moving, inspirational story. It would take a pretty cynical viewer not to be moved by Grandin's struggles and successes, particularly as they are presented with such smartness and honesty. And unlike movies that take a similar approach to portraying a unique thinker, such as Ron Howard's A Beautiful Mind, the effects-driven display of the subject's thought processes are not just for show. You end this movie understanding not just what Grandin accomplished, but how and why. Hers is a life worth honoring, and everyone here manages their very best to do so. 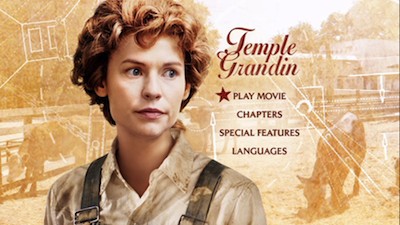 Video:
Temple Grandin was shot for television and is brought to DVD via an excellent widescreen presentation. The image quality is very good, with strong colors and good tonal values. There is no real problem with digital lines or pixilation. Everything looks as it should.

Sound:
The main English soundtrack is mixed in 5.1 and the audio sounds really nice. The dialogue is mostly centered, but there are also good ambient sounds and when loud noises affect Temple's moods, the volume is ramped up to good effect on the disc.

A standard stereo Spanish-language dub is also available, as are French and Spanish subtitles and English Closed Captioning.

Extras:
HBO includes a standard "making of" promo spot for Temple Grandin. Running just over five minutes, it features cast and crew talking about why they joined the project and what they think of it. The real Dr. Temple Grandin also appears, and it's uncanny how well Danes captures her mannerisms and speech patterns. There is also some time spent showing us that no real cows were traumatized in the making of this movie.

Dr. Grandin is also part of the full-length audio commentary alongside director Jackson and writer Monger. There is quite a bit of good and take here, with the filmmakers explaining their intentions and Grandin expanding on what we are seeing and what really happened--including pointing out the occasional inaccuracy. It will definitely add to your appreciation of the movie and its subject.

FINAL THOUGHTS:
Temple Grandin is an excellent example of how good the biopic genre cane be when the filmmakers are smart and focus the script on what is important. The story of Temple Grandin, an autistic woman who used her special skills to change the way we treated cattle in the meat industry, is an inspirational one, full of the peaks and valleys of any extraordinary life. The subject is played with impressive skill by Claire Danes, and the movie manages to show her unique way of doing things without turning it into a gimmick. Highly Recommended. 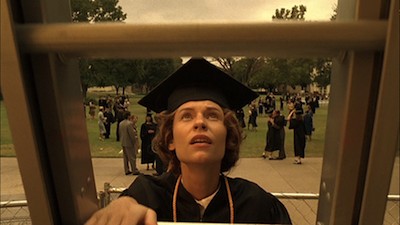