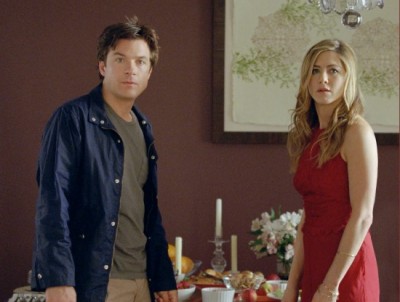 The ads for Josh Gordon and Will Speck's The Switch are pushing it (probably wisely) as a madcap sperm-donation comedy, and that's about what we'd expect from the directors, whose previous directorial credit was the Will Ferrell/Jon Heder ice-skating comedy Blades of Glory. But the source material hints that there might be more to it than that; it's based on a short story by Jeffrey Eugenides, writer of The Virgin Suicides, a novel whose film adaptation was not exactly a laugh riot. I'm not sure how pure a reflection of his story The Switch is, but the picture is clearly striving to be more than a late-summer gimmick laugher--it delves into serious themes, gives its actors real characters to play, and plays its fundamentally silly story straight. It doesn't pull off the elaborate juggling act, but hey, points for trying.

When the story begins, Wally (Jason Bateman) and Kassie (Jennifer Aniston) are best friends; they dated many moons ago, but Wally blew it, and now he makes like it's all better this way. Kassie, tired of waiting for the right guy and ready for motherhood, has decided to seek out a sperm donor. Wally disapproves, but primarily because he's in love with Kassie, and it doesn't help to discover that the donor, Roland (Patrick Wilson) is a handsome, sensitive professor. Wally gets good and hammered at a big insemination party at Kassie's (don't ask), finds the sperm, and accidentally dumps it (no, seriously, don't ask). Rather than explain, he employs some good old-fashioned three-sheets-to-the-wind logic and resourcefulness, and replaces the missing fluids himself.

Fast forward seven years (everyone ages really well in that time). Kassie, who moved back home to Minnesota to have her baby, is coming back to New York, and the more time Wally spends with little Sebastian (Thomas Robinson), the more... familiar he seems. Wally was too drunk to remember his little switcheroo, but he eventually puts together what he did, and knows he has to tell Kassie--but things get complicated, not only by his growing affection for Sebastian and slowly-rekindling flame for Kassie, but by Roland's slow progression from sperm donor to would-be beau for the sperm recipient.

That's a whole lotta plot, and in getting in all the shifts and turns, screenwriter Allan Loeb ends up skimming a lot of the material, and too frequently letting the dialogue traffic in clichés rather than subtleties--particularly in the serious scenes, which often don't have enough space to grow naturally out of the broader moments surrounding them. But those bumpy transitions are mostly smoothed out by the competent direction and heartfelt playing, and the script does have moments of real wit (Wally: "Tell me about your school." Sebastian: "Why?" Wally: "Because you're a kid, we've got nothing else to talk about.")

Bateman and Aniston are still primarily thought of as TV actors, but that's for good reason; over the three years of Arrested Development and the ten seasons of Friends, both developed a keen (and sometimes underappreciated) comic ingenuity, and they play well off each other, their chemistry genuine, their timing lickety-split (watch the way they bang the dialogue back and forth in that early conversation about the informercial slogan). Neither is stretching all that much, but they do what they do well; she's charming and likable, he's still the king of the dry, tossed-off reaction (his two biggest laugh lines in the movie, swear to God, are "Thanks for that..." and "That right?").

Directors Gordon and Speck handle their supporting cast well--young Robinson is terrific, Wilson is quite good as a nice guy who's maybe not so bright, and Jeff Goldblum, as Wally's boss and confident, steals every scene he brushes up against--and fill out the film with swell little comic touches, like the full-frontal nudity production of Hamlet. Jess Hall's widescreen compositions have a warm, lived-in look, and the occasional stylistic flourishes work, as do the impressive verbal and visual gymnastics necessary to get their PG-13 rating.

On the other hand, there are too, too many of the sad-music montages--it plays like what it is, which is lazy storytelling. (Alex Wurman's score also lays it on way too thick, particularly in the serious scenes.) The timing of the climax is contrived, and the last couple of scenes are just too easy; they feel like hasty, hurried re-shoots. But there's a lot to like about The Switch; it's a pleasant, personality-driven comedy that's just about sweet enough, considering how lightweight the whole thing is.