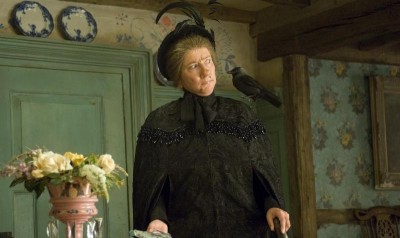 It seems Emma Thompson is now in possession of an inventive, humorous family film franchise. Back in 2005, "Nanny McPhee" was a mild Brit import, looking to jazz up the kiddie picture norm with a roundhouse punch of color, playful casting, and a firm grasp of the absurd to balance out the heart. Now there's a sequel, "Nanny McPhee Returns," which improves on the elements Thompson works hard to maintain in her screenplays. It's an amusing, wonderfully arranged sequel that brands the character as a cinematic force to be reckoned with, hopefully for the few more adventures to come.

Attempting to hold together a dilapidated farm during WWII, Isabel (Maggie Gyllenhaal) is not only dealing with the absence of her soldier husband, but the rambunctious nature of her three kids (Asa Butterfield, Lil Woods, and Oscar Steer), who spend their days futilely trying to keep the land in order. Compounding Isabel's anxiety is the arrival of two spoiled cousins (Rosie Taylor-Ritson and Eros Vlahos), who immediately bring about further chaos with their appalling attitudes. Coming to the rescue is Nanny McPhee (Emma Thompson), a ghoulish woman with a magical cane capable of helping the children learn five rules of proper behavior. As McPhee helps to unify the kids, Isabel's brother-in-law, Phil (Rhys Ifans), comes to swindle the family out of the farm, hoping to sell the land and pay off his incredible gambling debts. 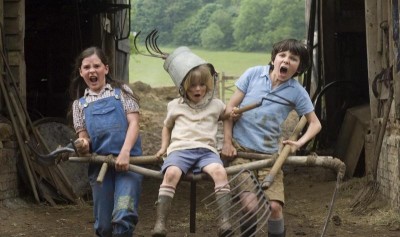 Director Susan White connects the two films with explosively colorful cinematography and a strident pitch of naughty behavior (given a major fecal squish to keep kids grossed out), but "Returns" takes a sharper route of delivery. Thompson's script feels out a grander scale of danger with bombing raid concern (the "Big Bang" of the international title) and a more edgy villain in Uncle Phil, who's facing his own troubles dodging Miss Topsey (Sinead Matthews) and Miss Turvey (Katy Brand), two cheery enforcers threatening the frightened man with kidney removal. "Returns" has a delightful bite to it that does wonders to counteract the syrup, matching a troubling era with appropriate financial and absentee parent quandaries, forcing the kids into action not only to save the farm, but to keep the spirit of their M.I.A. father alive -- a subplot that brings McPhee and the two elder boys into London via flying motorcycle to meet with the stern head of the War Office. 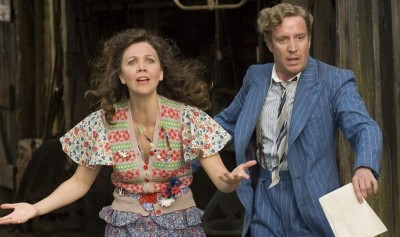 With a stronger sense of visual effects, "Returns" casts a more potent spell, playing with wacky animal behaviors (the farm pigs perform a water ballet when released) and the aforementioned nibbly bird antics. White maintains a surprising confidence with such madness, shaping the sequel into a more endearing, arresting picture without sacrificing the basics of youthful tomfoolery, mysterious nanny magic, and gooey family film triumphs. White also brings out the best in her cast, with Gyllenhaal unnervingly appealing as the harried mother, Ifans hoofing it up as the paranoid heavy, and Thompson stiffening her stern carriage as the title character. A dash of amusing star cameos from top Euro talent help to add some surprise as well.

"Nanny McPhee Returns" doesn't reinvent the wheel, instead tracing over the original picture with a more secure touch, slowly sniffing out fresh ways to cover the same ground through a welcome push of imagination, using its delicate sequel position to up the ante both visually and dramatically, while retaining the core appeal of the central character. It's a sound sequel, even managing to create excitement for whatever shenanigans Thompson has up her sleeve five years from now.