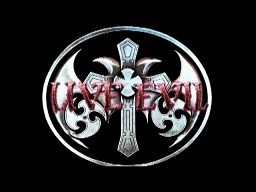 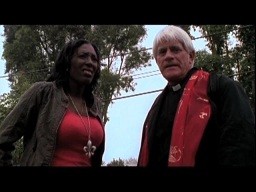 Tim Thomerson is back! Well, that's not true per se, as a cursory glance at the actor's IMDb profile page apparently shows that he never left the world of forgettable direct-to-video titles. However, when I picked this disc up from DVD Talk's screener pool, I hadn't seen the guy in what seemed like ages. For those who don't recognize the name, Thomerson was the frequent hardboiled hero of a number of 1980's VHS low-budget fare including such cult semi-classics as Zone Troopers and the Dollman series. He's perhaps most-remembered for his popular Jack Deth character from the multiple Trancers films.

And here the 60-something Tim Thomerson is, headlining the vampire action romp Live Evil in an unrated special edition from TM Entertainment. For fans nostalgic of Thomerson's videocassette heyday, Live Evil pretty much picks up where those films left off. There's plenty of action and gory effects (some of it more convincing than others) - and of course, a few bad puns and one-liners thrown in as well. It's about as good (or bad, depending upon your perspective) as any of the titles mentioned in the previous paragraph.

In Live Evil, Thomerson plays a brooding, nameless priest wielding a sword and a gun who is out hunting vampires, especially a quartet of bloodsuckers heading for Los Angeles. The character describes himself as "a minister of death" at one point. With HBO's True Blood and the ever-popular teen melodrama Twilight, vampires are almost passé at this point. Yet, give writer and director Jay Woelfel some credit here, as the vampire world of Live Evil still offers some novel ideas. In his film, vampires are chronically sick from feeding off of unhealthy humans suffering from AIDS, drugs, diabetes, pollution, and a poor fast-food diet. There are also gangs of vampires with different characteristics: some are fine in the daylight, some are not, and some, rather absurdly, can feed from mouths in their hands. And, they're certainly willing - and in some cases desperate enough - to feed on each other.

In any case, the Priest reluctantly teams up with Roxy (Kimberly Sanders), a woman he saves from a vampire attack at a bar restroom. The duo then tool around in her van getting into all sorts of gory tongue-in-cheek vampire altercations, including fending off a vampire baby at one point. Horror hounds have plenty to sink their teeth into, as there are gore effects galore and occasional gratuitous nudity. The movie has a grunginess reminiscent of John Carpenter's Vampires, yet for all its blood, it does have a dark sense of humor permeating throughout.

The movie perhaps would have been more consistently successful had some further editing been done. A vampire party at a blood dealer's home (the dealer is played by character actor Ken Foree, who also executive produced) was a clever idea but runs on far too long. It also contrives to show footage from the silent horror film classic Nosferatu. Yes, it's apparently in the public domain, but that doesn't mean that every other low budget vampire movie needs to find a way of jamming footage from that film into their narrative. The climactic battle between the Priest and the vampires also feels too-long, and a surprise "twist" at the end isn't all that surprising.

Still, Live Evil has more creativity and a sense of schlocky fun than the majority of its low-budget ilk. And it's good to see Tim Thomerson up to his old tough guy routine. Given its generous extras (more on these in a bit), I'd give this release a mild recommendation for horror and cult film fans. 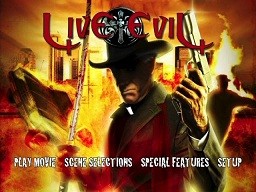 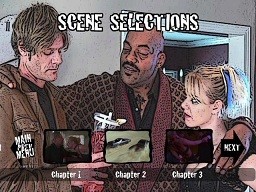 In this technical aspect alone, the DVD of Live Evil disappoints, as the film is presented widescreen but non-anamorphic. Zooming in on the image to fill a widescreen television screen will reveal artifacts, aliasing, and a general lack of clarity. Boo!

Unlike the visual quality, the sound comes across strongly. Two English language audio mixes are available: Dolby 5.1 Surround and Dolby 2.0. The former appears to be the default and the one I listened to. Dialogue was always clear, and sound effects well-represented, perhaps even overly so as vampires slurp blood loudly at times to an unintended(?) comical effect.

Optional subtitles are available in English and Portuguese.

First and foremost is a feature-length commentary track with director Jay Woelfel, producer Mark Terry, and actor Mark Hengst. A random sampling suggests it is lively and informative.

Given that the majority of low budget horror on home video tends to have little if any supplementary material, these alone would be considered a boon. But, TM Entertainment also includes a short film titled Night Demons (14:33) and an introduction by producer Mark Terry (2:18) that explains how the short was a precursor to Live Evil. So, all in all, it's a fairly loaded disc for those interested in exploring the film further.

Live Evil might drag on a bit too much at times, but it's still a reasonably entertaining vampire action romp, though its audience will likely be limited to horror and cult film fans. Actor Tim Thomerson returns to his hardboiled routine effectively in a role that hearkens back to his VHS heyday, and the disc is loaded with enough extras to warrant a mild recommendation.