Benedict Cumberbatch! A name so epic, local (Portland, OR that is) radio host Bobby "Fatboy" Roberts has turned it into an exclamation of awesome. However, behind that epic name lies an actor filling the shoes of one of the, if not THE most famous detective known to man, Sherlock Holmes. Cumberbatch is one half of Steve Moffat's modern re-imagining of Sir Arthur Conan Doyle's literary icon, titled simply "Sherlock." With Martin Freeman at his side as Dr. John Watson, Cumberbatch's Holmes eagerly kicks his way into various mysteries, aggravating Scotland Yard and D.I. Lestrade (Rupert Graves) while remaining their only hope for cracking some baffling mysteries with the skill and intellect fitting of a man described by one character as "mildly sociopathic." 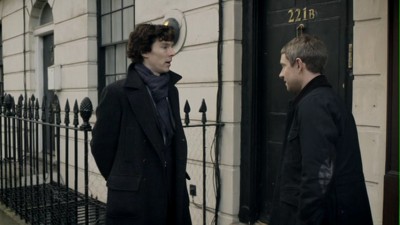 Moffat's series consists of three, roughly 90-minute episodes that each adapt one of the classic Holmes stories for a modern London setting. Moffat's work on "Doctor Who" proves to be no fluke as he works his magic here, brilliantly creating three tonally different TV-movies that function as a perfect encapsulation of a TV season. Beginning with "A Study in Pink," which adapts the original story "A Study in Scarlet," "Sherlock" focuses first on Dr. Watson, who has just returned from service as an Army doctor in Afghanistan; suffering from PTSD, he has a psychosomatic leg injury requiring him to depend on a cane. Unlike some adaptations which play Watson as comedic relief or act afraid to let the character's own brilliance shine forth, Moffat makes Watson a vital key to the series. Most obviously, he is our "avatar" for life with Sherlock, quickly becoming Holmes' flatmate and co-conspirator. On a second level, he is the missing pieces of Sherlock himself, who is shown to either lack (or blatantly ignore) common social courtesies. In the third episode, a running gag regarding Holmes' ignorance of elementary school level concepts of astronomy, relying on Watson's common sense at times.


Freeman is very comfortable in the role, allowing Cumberbatch to flex his muscles, but never allowing himself to be pushed aside, which itself is no easy feat, given the grandiosity of the Holmes character in this series. "A Study in Pink" delivers everything one could expect from a Holmes mystery or at a more basic level, a procedural mystery. We get enough back-story from both characters to have a sense to how they operate, and once both are settled in at 221B Baker Street, it's off to find the link behind a batch of mysterious identical suicides. Meanwhile, a shady, well-connected official plagues Watson due to his new found friendship with Holmes. Moffat's script keeps things moving at a great pace and concludes with a tense finale that doesn't let you rest until the credits roll. 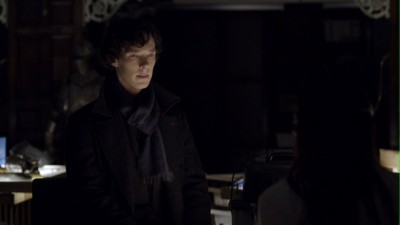 In the second episode, "The Blind Banker," based on "The Dancing Men" and "The Sign of Four," things are a little more laid back, with Watson's character given more chance to grow, while Holmes is left to crack the mystery behind some mysterious symbols and unexplained murders. While the episode doesn't move as quickly as the previous or the following, it is still a solid 90-minutes of television. Cumberbatch is equally brilliant here, never resting on his laurels, driven not by a desire to help the authorities solve the case, but instead by his own need for a challenge, a character trait which is a constant throughout all three episodes and sets up the final episode in the season, "The Great Game."


Moffat and company pull out all the stops for the season finale that feels like it's been injected with some "24" style approach to storytelling. Here, Holmes is tasked with solving a series of unsolved crimes; should he fail, the madman behind the plot will kill an innocent victim being used to inform Sherlock of the rules by phone. Here, Holmes ego becomes a liability when lives are on the line and the viewer is tasked with rooting for a character that once again desires to satiate his own thirst for success, rather than save a life. Cumberbatch has a stellar moment highlighting Holmes' near sociopathic tendencies, posing as a friend of a murder victim to draw out information from the man's grieving widow. Once his (intentional) ruse is spotted, he flips the switch back to his emotionally cold, brilliant self; a chilling but effective display of acting talent. "The Great Game" also gets a wonderfully filmed action sequence as Holmes and Watson struggle with a hulking killer amidst a strobe light lit backdrop. "Sherlock" keeps things interesting throughout all three episodes with some exciting action sequences which all properly fit into the case and aren't merely tacked on. 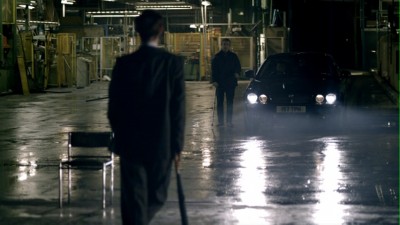 Unfortunately, "Sherlock" ends with a cliffhanger finale, just like one would expect from a season finale of a complete season, but at only three episodes, this initial outing can feel frustrating. Fortunately, it's been confirmed there will be more "Sherlock," in the form of another three, 90-minute episode series in late 2011. Hopefully, the second season will be able to keep up the energy of this freshman season. At the very least, "Sherlock" has given Benedict Cumberbatch the platform for bigger success, much akin to the way David Tennant became an international name after his work on "Doctor Who." That's not to take away from Martin Freeman's often understated, reliable performance. Anyone unsure of if he's the right fit for "The Hobbit" need look no further but here. Both leads ensure what are at the core, basic procedural mysteries feel exciting and new, while Moffat and co-writers Stephen Thompson and Mark Gatiss, keep the twists coming when needed and provide both characters with sharp dialogue; although the gay jokes regarding Holmes and Watson's sudden pairing do get old quick. 2011 can't come soon enough though.


The 1.78:1 anamorphic widescreen transfer is strong in all categories save for some annoying aliasing problems and minor edge enhancement. Colors capture the cold and damp sights of London well, with contrast levels ensuring darkened alleys reveal just enough and nothing more. Detail levels are strong, capturing fabric textures and facial features, while compression artifacts are nowhere to be found.


The English Dolby Digital 5.1 audio track is very competent, but a tad underwhelming. Dialogue as expected dominates, clearly without distortion, but the entire mix feels a little underdeveloped, with appropriate use of surrounds, but not nearly as impactful as expected. English subtitles for the hearing impaired are included.


Two feature-length commentaries by the shows creators on "A Case in Pink" as well as the show's two leads on "The Great Game" make up the lion's share of the bonus features. A wide variety of subjects are covered and the commentaries are generally pleasant and insightful. On disc three, a roughly 30-minute behind-the-scenes special "Unlocking Sherlock" provides a good overview of production from the genesis of the idea, to the filming of the episodes, including the original pilot for "A Study in Pink" which never aired on TV. Additionally, that very pilot is also included as a bonus and shows how the show changed its style in certain places, but largely kept the same story.

An essentially perfect update of the classic character "Sherlock: Season One" provides viewers with three, thrilling procedural mysteries with enough twists and turns to keep you guessing. The true highlights are the two unique and tonally different performances by leads Benedict Cumberbatch and Martin Freeman. Add to all that a DVD package which is fairly comprehensive in behind-the-scenes information, and I have no problem declaring this one of the best DVD releases of 2010. DVD Talk Collector Series.