Kino // Unrated // November 30, 2010
List Price: $29.95 [Buy now and save at Amazon]
Review by Chris Neilson | posted November 24, 2010 | E-mail the Author
Liverpool, a minimalist study in isolation, concerns a middle-aged sailor returning to his boyhood home for the first time in many years to learn whether his mother is still alive. Sailors on sea-going freighters are a notoriously reclusive lot, but Farrel (Juan Fernández), a hermit among monastics, stands apart even from the meager social conventions of ship life, preferring nothing better than to numb himself with vodka whenever possible.

There's little dialogue in Liverpool, and less explanation. The viewer is left to infer much of the story from the slight action proffered. When Farrel's ship docks in Ushuaia, the southern-most Argentine port, he obtains shore leave to visit home. After an indeterminate number of years at sea, Farrel doesn't know what to expect, and appears reluctant to complete the journey. After wasting a night in Ushuaia, he hitches his way to the tiny timber-company outpost of his childhood, but even once back in his native hamlet he can't easily bring himself to go home. 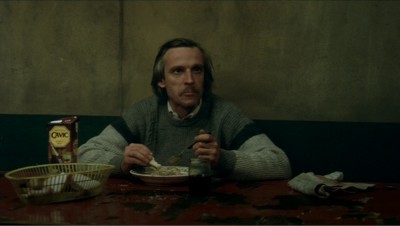 The people that Farrel has left behind are no more happy to have him back than he is to be there. His now senile mother doesn't remember him, and Analía (Griselle Irazzabel), a seemingly cognitively-delayed young woman who may be Farrel's daughter, wants nothing from him but money. Trujillo (Nieves Cabrera), who could be a relative or perhaps just a family friend, berates him for coming back after so long away. Surprisingly, when Farrel leaves, we stay, and filmmaker Lisandro Alonso turns his gaze to the deary life of young Analía. 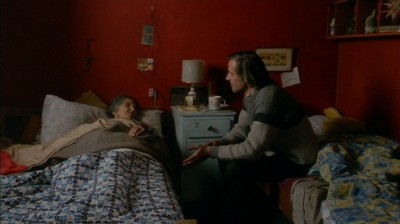 Presentation
Video & Audio:
Liverpool is presented in anamorphic widescreen (1.85:1). Colors are washed out, but likely just as intended. Detail is soft but acceptable.

The 5.1 original Spanish audio is understated, but in keeping with the film as a whole. Optional English subtitles are provided.

Extras:
Extras are limited to a still gallery with many images apparently taken from outtakes not otherwise provided, and a print interview with the director.

Final Thoughts:
Framed in middle shots, with mostly natural lighting, infrequent dialogue and minimal action which mostly unfolds in unhurried real-time, Liverpool could almost pass for observational documentary. Viewers prone to restlessness or boredom by languid drama should stay away, but filmmaker Lisandro Alonso provides just enough substance and style to make the journey worth the effort for those who appreciate minimalist realism.