Kino // Unrated // November 2, 2010
List Price: $29.95 [Buy now and save at Amazon]
Review by Chris Neilson | posted November 8, 2010 | E-mail the Author
In 1989, Jack Rebney was hired as a pitchman for an industrial film intended to inform RV dealers and salesmen about the new features on the latest Winnebago model. The filming didn't go well -- it was too hot and humid, there were too many flies, Jack couldn't remember his lines, and he didn't get along with the production crew. Hot and frustrated, Jack frequently let loose with a tirade of mostly self-directed profanity, which in this post Christian-Bale-Outburst era would hardly raise an eyebrow. However, unbeknown to Jack, the crew recorded his tirades and used them to get Jack fired. 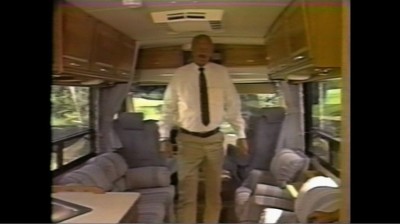 That should have been the end of a rather mundane story, but it wasn't. Jack's outbursts began circulating on VHS tape, and fifteen years later became one of the first widely-viewed "viral videos" on the nascent YouTube. More than 20 million views later, Jack Rebney, the so-called "Angriest Man in the World", is nearly as celebrated as the Star Wars Kid or the Dramatic Prairie Dog in the world of internet memes.

For reasons only clear to himself, and perhaps to the subset of YouTube aficionados to whom this documentary is targeted, documentary filmmaker Ben Steinbauer set out to find whether Jack was still alive, whether he was aware of his internet fame, and if so, what he thought about it. The short answers are yes, barely, and not much. Though I'd be content to leave it at that, Steinbauer isn't.

After spending 23 minutes addressing the nature of internet celebrity and tracking Jack down, Steinbauer spends the next half hour, with limited success, trying to discover who Jack really is and how best to package him for documentary viewer consumption, before spending the last half hour orchestrating Jack's transition from internet sensation to film festival celeb.

Steinbauer's success in revealing the real Jack Rebney is mixed. We learn that Jack is a hermit in the wilds of northern California, with one canine companion and one human friend. We learn that he used to work for CBS as a newsman, that he detests Dick Cheney and Wal-Mart, that he's writing a manifesto, and that he's going blind. Steinbauer also presents enough of Jack for the viewer to infer that Jack's misanthropy is one part contempt for mankind in the abstract and one part affectation. Though quick to perform his role as the Angriest Man in the World and generally dismissive of everybody he hasn't met personally, Jack is nearly as quick to develop a bond with Steinbauer, and quicker yet to warm to the interest showered on him by the audience of San Francisco hipsters at the Found Film Festival, the focus of the documentary's overly-long third act. 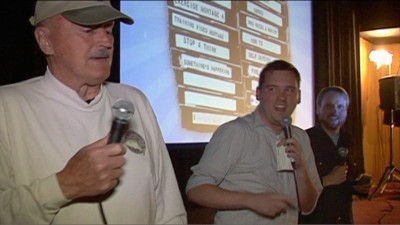 The 5.1 audio sound fine on this dialogue-driven documentary. The dialogue is clear, and there's a bit of dynamism on the score and in the film's one crowd scene. No subtitle are offered. 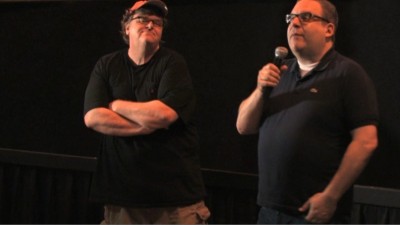 Final Thoughts:
Though Winnebago Man will hold some appeal to a certain subset of YouTube aficionados, this documentary doesn't work on its own as a quirky character profile. Compared to better docs in this subgenre from the acclaimed (e.g., the Maysles' Grey Gardens or Terry Zwigoff's Crumb) to the relatively obscure (e.g., Jacob Young's Dancing Outlaw or Jeff Malmberg's Marwencol), Winnebago Man suffers from a protagonist who proves to be little more than a self-styled curmudgeon with a softer side than he let's on, and a filmmaker too inexperienced or uninspired to craft a compelling documentary nonetheless.