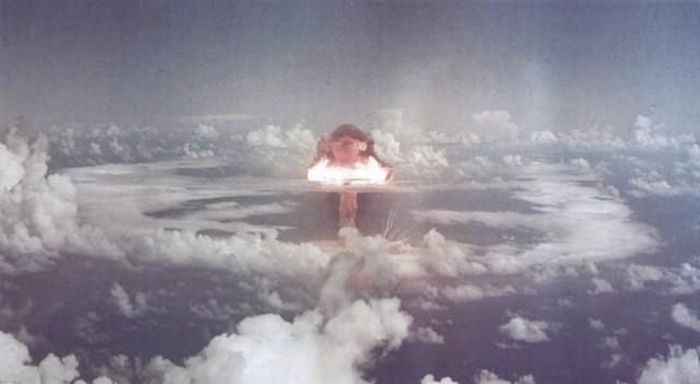 I went to elementary school in the
early to mid-1980s, the heart of the Reagan era, during which time duck-and-cover
drills were conducted approximately once a quarter. These exercises
will still be familiar to California schoolchildren, where they are
applicable in the event of an earthquake. But "duck-and-cover"
grew out of another, more dire fear - nuclear bombardment.
(For the sake of discussion, let's pass over the exponential disparity
between the relative benefits of hiding under one's desk during an
earthquake versus during almost guaranteed annihilation.) It's
only been about 25 years since duck-and-cover drills - or any other
routine exercise of preparedness for nuclear attack - have been a
regular part of American life. Their diminution coincided immediately
with the conclusion of the Cold War, a largely fictitious "conflict"
that consisted of a series of fantastic narratives told to us by our
government (and by other governments to their populations) that pitted
mainly the US and the USSR against each other in a deadly struggle to
prevent each other from exploding a nuclear bomb - something neither
nation ever intended to do. When the Cold War ended, nuclear weapons
were utterly forgotten, and in the space of no more than five years,
the threat of a nuclear holocaust - a dominant feature of global discussion
for four solid decades - simply evaporated.

Of course, now we face other, more
imminent and obvious threats, although there is also a sense that these,
too, are nonetheless overplayed by the enforcers of "safety" that
we elect to public office. But these newer threats both conceal
and intersect with the quietly persistent danger of nuclear weapons,
and Lucy Walker's skillful and responsible documentary does us the
invaluable service of bringing our heads out of the cloudy smoke screen
of "terror" and back to a certain level of reality. Countdown
to Zero recounts how we came by nuclear weapons, their role in the
last half century of global affairs, and the continued post-perestroika

Far from being alarmist or propagandistic,
Countdown to Zero is a sober film that includes a multitude of voices,
including some who once believed in the strategic value of nuclear weapons
as a deterrent. We also hear from scientists, journalists and
historians, and former heads of state, including Mikhail Gorbachev.
The film cribs its structure from President Kennedy's famous address
to the United Nations on the topic of nuclear weapons: "Today, every
inhabitant of this planet must contemplate the day when this planet
may no longer be habitable. Every man, woman, and child lives under
a nuclear sword of Damocles, hanging by the slenderest of threads, capable
of being cut at any moment by accident, or miscalculation, or by madness.
The weapons of war must be abolished before they abolish us."

The film is divided into sections roughly
organized around the three factors included in the phrase "by accident,
or miscalculation, or by madness." These sections examine the
history of nuclear technology, the stakes of the Cold War, the ease
with which military nukes can be deployed (and the ease with which relatively
simple communications errors can lead to a launch), the mechanics by
which terrorist organizations could obtain and use a nuclear device,
and the exact countries that have nuclear weapons and the approximate
total number that exist. Walker assembles a variety of talking
heads, some of whose contributions are plain and direct (Valerie Plame,
Ahmed Rashid), and some of whom seem merely self-serving (Tony Blair,
Pervez Musharraf). But the specifics are urgent and compelling
- the story of inter-agency quarrels that led to American nuclear
enable codes all being set to zero during the height of the Cold War
is all too credible.

Walker's film has a very plain message,
a refreshing boldness of purpose that puts Michael Moore's condescending
and unappealing films to shame. Countdown to Zero is a
reasonably apolitical film that brings us back to brass tacks on the
subject of nuclear weapons, which will remain the direst of threats
until they are verifiably eliminated from the face of the earth.

The enhanced 1.78:1 transfer by Magnolia is very good. Contrast
and detail are outstanding, with nary a speck of compression evidence.
Sharp color and deep blacks nicely complement the film's thoughtful
design and excellent editing by Brad Fuller and Brian Johnson.
The movie features good use of digital graphics and animation, which
are also well-replicated here.

The 5.1 surround soundtrack is good, although the film's content
prevented me from deep engagement with it. Going back after the
movie was over, I realize that the mix is quite vibrant in spots, and
good sound effects work has enhanced much of the archival footage.
The track has been given much consideration by the filmmakers, who have
done more sound work here than on the average documentary.

Magnolia has included some pretty interesting extra features on
the disc. A group of Deleted Scenes (9:48) includes some
crucial information on the Cuban Missile Crisis and Robert Oppenheimer
that I'm surprised didn't make the final cut (the feature runs only
89 minutes). Additional Interviews (40:50) include unused
footage dealing with the concept of nuclear winter, as well as more
from Jimmy Carter and his former National Security Advisor Zbigniew
Brzezinski. Archival Footage (64:33) is a bit of a misnomer,
as the section actually consists of three indispensible government-funded
historical documentaries: The Town that Never Was is about the
development of the nuclear bomb in Los Alamos, NM; Operation: Greenhouse

is about the development of the hydrogen bomb; and Atomic Support
for the Soldier is a terrifyingly bull-headed attempt to justify
the use of nukes in combat by "demonstrating" to soldiers in an
exercise how they could continue to pursue an enemy in bombed territory.
These three short films are probably even more disturbing for their
horrifyingly asinine credulity than the feature is in its frightening
statistics.

Countdown to Zero should be
seen by everyone. Although it could have been more thorough and
inclusive - and much longer - the film is still extremely
important. A harsh reminder of the insane "values" that shape
the world we live in, and a hopeful suggestion that all is not lost
as long as we still have the capacity to eliminate nuclear weapons from
our considerable list of worries, Countdown to Zero should be
screened in homes and classrooms around the world. Highly recommended.