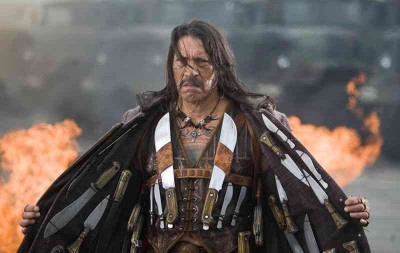 Assembled as a faux trailer to help enhance the tattered mood of 2007's double feature event, "Grindhouse," "Machete" was viewed as a way to create a triumphant Mexican hero in 2 1/2 minutes, possibly leading to his own feature as part of any potential sequel. Well, "Grindhouse" died an unjust death, but the character of Machete marches into his own adventure, retaining the low-down-dirty-shame production effort, but bringing along a few casting surprises to spice up this fully armed, gore splattered, amusing action explosion. It doesn't precisely capture the miracle of "Grindhouse," but it's a fittingly head-chopping offshoot, smartly timed to feed on current immigration hysteria.

Left for dead after his wife and child were killed by Torrez (Steven Seagal), a ruthless drug lord, former Federale Machete (Danny Trejo) takes to the life of a day laborer, lost amongst the million Mexican faces in south Texas. Soon hired by shady businessman Benz (Jeff Fahey) to kill controversial immigration opponent Senator McLaughlin (Robert De Niro) for a chunk of change, Machete finds himself set up as a patsy, caught between the questions of I.C.E. officer Sartana (Jessica Alba) and the militaristic passion of Luz (Michelle Rodriguez), who runs a network devoted to improving the lives of illegals, formed in the shadow of She, a mysterious Che Guevara figure. Finding himself inching closer to Torrez's whereabouts, Machete and his compatriots declare war on McLaughlin's new world order, overseen by vicious border guard vigilante, Von (Don Johnson). 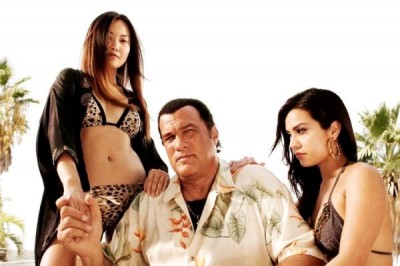 Piecing together footage shot for the original "Grindhouse" trailer with fresh material, "Machete" is a patchwork quilt of a movie, with directing credits awarded to both Robert Rodriguez and newcomer Ethan Maniquis. It's a tag-team effort to bring this multi-bladed Mexican brute back to the screen, but it's a satisfying endeavor, carefully blurring the years between shoots with some cautious editing and CG-boosted trickery, attempting to take a germ of an idea for a glorious, grizzled "Mexploitation" revenge picture and roll it out to feature-length proportions. It's less dependent on the funky "Grindhouse" aesthetic, but still bastes in the juices of gnarled, frayed cinema history -- schlock from the heart, without the big-budget burden.

Like a good chunk of "Grindhouse," "Machete" is a semi-campy take on the excesses of old, with the filmmakers delivering an amusing blood-soaked tale of revenge and conspiracy, following Machete as he encounters all types of corruption and idealism, with much of the script centered on the Mexican immigration debate. On one side, there's Senator McLaughlin, a blowhard politician using the promise of an electrified fence along the border to help himself to reelection. On the other side, there's Luz, a weary soldier who views migration reality from the tight confines of her taco truck, where she executes her underground plans. While hardly the stuff of "60 Minutes," "Machete" has a certain pitch of south-of-the-border sympathy that's sure to make it a controversial motion picture, taking great delight in vilifying American extremists and political knuckleheads. Of course, it's sold in the most sillyhearted manner imaginable, and I can't imagine anyone taking "Machete" too seriously when it contains a scene where our hero uses the intestine of his enemy to help rappel down to a lower hospital floor during one of his many shootouts. And if that doesn't defuse the film's political toxicity, how about a moment where Machete is hoodwinked by a fully nude temptress, who calls in her victory using a carefully stored cell phone. And I mean carefully stored. 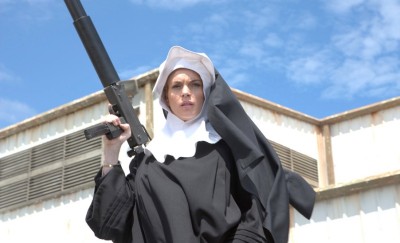 "Machete" is superbly violent, with Trejo spending much of his screen time chopping heads open or blowing away whatever criminal boob decides to stand in his way. Perhaps fearful of a straightforward actioner, Rodriguez and co-writer Alvaro Rodriguez decided to expand the script with all manner of subplots, overstuffing the movie with a superfluous routine of exposition and revelation, in the same swollen manner that crippled the merriment of Rodriguez's 2003 sequel, "Once Upon a Time in Mexico." Still, the verbose script is gamely carried out by a colorful cast, with Fahey sweating magnificently as a reptilian middle-man who spends as much time failing to kill Machete as he does stifling incestuous thoughts about his drug-addled daughter, April (Lindsay Lohan, in a worthless bit of stunt casting). Jessica Alba is also a gas in the picture, providing the movie with a needed shot of sincerity to counteract the winks. She's commanding, alluring (a government agent with a penchant for high heels and showers), and holds a believable posture of toughness, bouncing off Trejo and his brick wall screen presence well.

Propelled by a marvelous score from Rodriguez's band Chingon and filled out with a few decent gags that heartily poke at action clichés and flashy Mexican culture, "Machete" is a comfortable ride of provocative absurdity, having one hell of a time making a mess out of everything in its path.