Alive Mind // Unrated // May 18, 2010
List Price: $24.98 [Buy now and save at Amazon]
Review by Chris Neilson | posted September 3, 2010 | E-mail the Author
Tenzin Gyatso, the 14th incarnation of the Dalai Lama, Tibetan Buddhism's most revered leader, spends five months a year in isolated study and contemplation. During the other seven months though, he's engaged in near-constant advocacy for a myriad of global human rights-related issues including wealth redistribution, public health initiatives, disarmament, climate change, women's rights, literacy, fisheries management, religious toleration, and especially, political and religious autonomy from China for Tibet. The Dalai Lama pursues his agenda through one-on-one meetings with world leaders, larger audiences with the international political class at home and on a global lecture circuit abroad, and by reaching even wider audiences through media, especially television and home video. In addition to countless interviews for television news and public affairs programs, since 2000, the Dalai Lama has appeared in more than sixty documentaries. The most recent to reach DVD is Vitaly Mansky's Sunrise/Sunset (2008) which made the rounds on the international documentary film festival circuit in 2009, but never had theatrical or television distribution in the United States.

Narrated in Russian by the filmmaker, with English and Tibetan dialogue, and English subtitles, the conceit of Sunrise/Sunset is a routine day in the life of the Dalai Lama at his compound in Dharamsala, India, where he has presided over the Government of Tibet in Exile since 1959. The Dalai Lama's day begins before 5 AM with meditation and religious observation in the form of repeated prostrations, followed by brisk walking on a tread mill, and then breakfast, the heartier of his two daily meals. 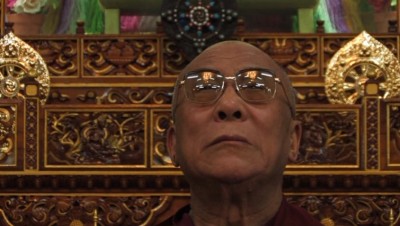 Following breakfast, the Dalai Lama and the filmmaker discuss politics, theology, and philosophy on the veranda. The Dalai Lama reveals that he may choose to be reincarnated outside of Chinese-controlled Tibet. In discussing theology, he shares his belief that all major world religions share a universal message, but superficially diverge for cultural reasons. Discussing the conjunction of philosophy and theology, the Dalia Lama expresses his belief that essential human values are innate, while religious dogma is learned.

Following their interview, the Dalai Lama proceeds to an outer courtyard where a large audience of Buddhist monks and nuns, pilgrims, and world travelers are assembled to hear him lecture. These sessions which can last for up to five hours, are far-ranging in their subject matter. The segment which Mansky captures relates the scientific theories of the Big Bang and Darwinism to theology and the human condition. While lecturing, the Dalai Lama sits cross-legged on a raised dais, speaking Tibetan into a headset microphone while his non-Tibetan-speaking audience follows along via translations provided either live through interpreters with microphones, or via personal audio players from a prepared script.

At the end of his lecture, the Dalai Lama shares lunch, his last meal of the day, with his audience, then heads off to an audience with a more select group of international visitors from the political class. Following this, he retreats to his office where he again grants an exclusive audience to the filmmaker while channel surfing. A nature documentary about tigers catches his interest until he happens upon an interview he gave to his favorite network, BBC World.

By sundown, the Dalai Lama retires to his personal chambers, and the documentary shifts to the filmmaker's long return journey to Russia via China, with extensive musings via voiceover by the Dalai Lama and the filmmaker about the future of Chinese and Russian relations. I suspect this post-script which consumes about twelve of this cut's 72 minutes may have been longer in the original festival cut which clocked in at 94 minutes.

Presentation
Video & Audio:
Sunrise/Sunset is presented in anamorphic widescreen (16:9). Apparently shot on HD video, the image looks fairly good despite being interlaced. Colors are realistic, contrast is good, and detail is mostly fine despite the effects of the interlacing.

The mixed Russian, English, and Tibetan audio is presented in stereo with forced subtitles. The audio quality is completely satisfactory for a documentary of this kind with no dropouts or distortions, albeit with little dynamism either.

Extras:
Other than a trailer for this documentary, there are no extras on this release.