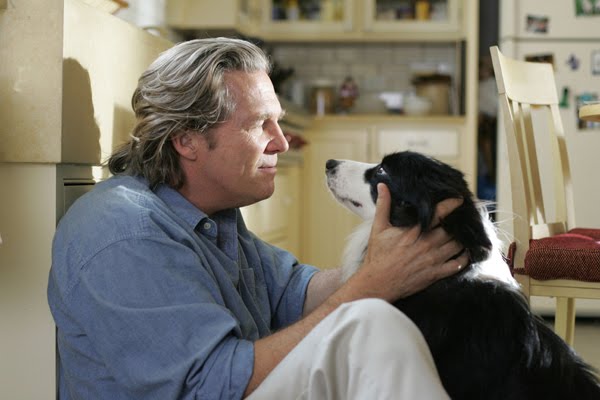 Jeff Bridges is often cast as characters
who are gregarious, physically expressive, and energetic. In A Dog
Year, he plays an inward-looking version of the real writer Jon
Katz, who authored a book of the same name. HBO's film version of that
story (written and directed by George LaVoo) traces a difficult period
in Katz's life when he was separated from his wife, took on a new dog,
and experienced a heavy dose of writer's block. The movie belongs to
Bridges and the Border Collie his character adopts, Devon. At a brisk
but focused 80 minutes, A Dog Year is never cutesy nor does it
strive to be "family friendly." It's a character-focused story
about a man who was almost impossible to get along with, whose isolation
brought him face-to-face with a dog who was almost as difficult as he
was.


Katz lives in a big house in New York with two Labrador retrievers.
His daughter is away at college, and his wife is, well, away.
Katz lumbers around the house wearing the same thing day after day,
eating crappy processed foodstuffs, and primarily engaged in the activity
of not writing. He decides to spice things up by acquiring a third dog
- this time through a dog rescue organization. Black-and-white Devon
arrives by air, in a crate, filthy, malnourished, injured, and psychotic.
Katz treats Devon with a combination of unconditional love and total
bafflement. He is unable to deal with the reasons for the dog's behavior,
which mirrors his block as a writer - he either refuses or is unable
to look past the surface of things and grapple with the real and obvious
problems.

Although the film is eminently enjoyable, there are a couple of things
that bothered me. Number one is Katz's ignorance about Border Collie
anxiety and behavior. As working dogs, urban and suburban Border Collies'
genetic instincts make them behave fundamentally differently from almost
every other breed. The fact that Katz never grasps the disconnect that
a previously-abused Border Collie might experience in a new environment
is beyond me.

Also problematic is the abrupt ending, which shows Katz finally getting
a handle on Devon after retreating to the countryside and seeking the
help of a farmer familiar with working dogs. Devon finally begins to
learn something about obedience, but the film ends before we see any
sustained change through the training process, which surely must have
taken some time.


But I don't want to harp on negatives, because A Dog Year is
a charming movie. Bridges is excellent, as usual, in an understated,
quiet role as the grouchy, misanthropic Katz. He pinches his mouth in
a frog-like frown throughout the picture, and wears the same costume
almost nonstop. Bridges is always unafraid to look like shit, and this
serves him particularly well here. The dog(s) playing Devon are ideal,
and Devon is quite a meaty role, too, going through marked changes in
behavior. Of course, more than one dog was used, but this had to have
been a major challenge for writer-director LaVoo, who had to capture
the right behavior from the dog-actors. Still, the total performance
of "Devon" is seamless. It's an especially impressive achievement
given the fact that he had to maintain the film's ultimate focus on
Katz's evolution while corralling all this dog action.

A Dog Year is a small film, but an engrossing and believable
one. Films that pair animals with stars are not kindly looked upon by
the film-going public, because they have endured Our Gang shorts and

Oh, Heavenly Dog! and the Beethoven
franchise. But A Dog Year is an adult story, told maturely, that
avoids bleeding over into mere animal "hijinx" for the sake
of easy laughs. Devon is as real a character as Katz, and that is an
accomplishment.

This new film bears a pristine look on DVD. The generally green-and-white
color palette of the film is very easy on the eye, thanks to the gorgeous
photography of Frederick Elmes. The transfer is very solid, with only
very minor and infrequent compression evidence. The 5.1 is very nice,
evenly balanced, with good use of sound and sound effects. It's not
a speaker-buster by any means, but it's an active, enveloping track,
especially for a movie that's generally pretty quiet.

Unfortunately, the only extra feature is a 3-minute promo piece for
the film that barely scratches the surface of the story's true origins
or the challenges of shooting with dogs. A commentary track with LaVoo,
Katz, and/or Bridges would have been enlightening, but it won't be found
here.

A Dog Year is enjoyable, cheering entertainment that features
another strong Jeff Bridges performance, and showcases a rare ability
to treat an animal like a fully-formed character. Recommended.