Oscilloscope Laboratories // Unrated // September 7, 2010
List Price: $29.99 [Buy now and save at Amazon]
Review by Chris Neilson | posted September 10, 2010 | E-mail the Author
College freshmen Ivy (Zoe Kazan) and Al (Mark Rendall), friends since eighth grade, are back home in New York for spring break. Inexplicably, Al's parents have rented his room out, prompting him to crash on Ivy's mother's couch for the break. Over the course of the break, Ivy is dumped by her first college beau via cell phone, Ivy and Al are left to their own devices by Ivy's inattentive mother to attend parties and jaunt through the public spaces of New York, Al gets high a lot, Ivy and Al watch some birds and reconsider the nature of their relationship, and that's about it. 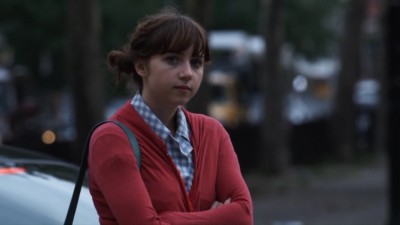 Written and directed by Bradley Rust Gray specifically for Kazan, The Exploding Girl is a character study firmly grounded in the low-budget, minimalist genre tagged mumblecore. Shot in real locations including public venues that haven't been closed for shooting, with mostly natural light, minimal scoring, sparse dialogue, languid pacing, and as-yet relatively-unknown young actors, The Exploding City is reminiscent of films such as Joe Swanberg's Hannah Takes the Stairs, Aaron Katz's Quiet City, and, naturally enough, In Between Days which was directed by Gray's wife So Young Kim, and co-written by Gray.

As a minimalist character study, The Exploding Girl relies almost entirely on the performances of its young actors, but especially Kazan, to carry the film through its 80-minute runtime. Kazan, daughter of screenwriters Nicholas Kazan and Robin Swicord, and granddaughter of director Elia Kazan, manages to convey shielded interior turmoil, melancholy, naïveté, and vulnerability without being obvious or clichéd. 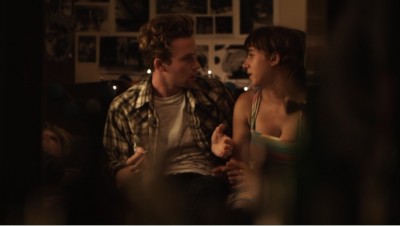 Video & Audio:
Shot on HD video, and presented in anamorphic widescreen (1.78:1), this release has vivid colors and superior contrast. However, the presentation suffers from occasional pixelation which is obvious on large displays, but not noticeable on smaller screens.

This release provides both 5.1 and 2.0 audio options, as well as optional subtitles. Apparently thanks to some heavy post-mixing, the mixed interior and exterior soundscape is lifelike, though there's one scene in which dialogue is so low that most viewers will either have to turn the sound up or put the subtitles on, or just settle for catching the drift of the conversation rather than every word.

Extras:
Extras consist of an interview with Zoe Kazan and Bradley Rust Gray about creating Kazan's character (13 min.), a music video for Asobi Seks' "Thursday" directed by Gray and his wife So Young Kim under the name Soandbrad, which is featured in the film (4 min.), Gray's 1997 student-film Flutter about a first romantic encounter with an unexpected revelation (5 min.), and trailers for four DVD releases, including this one, from Oscilloscope Laboratories.

Final Thoughts:
For viewers open to a languidly-paced, indie drama in which not much happens, but which is filled with charmingly-understated character acting, The Exploding Girl is recommended.