Other // Unrated // June 1, 2010
List Price: $24.98 [Buy now and save at Amazon]
Review by Kurt Dahlke | posted September 15, 2010 | E-mail the Author
Slithis:
It's the type of movie that might scare the crap out of a sheltered 10-year-old, when seen on TV at night. (Back in 1978 when Slithis first hit the theaters, many kids were more sheltered to the effects of cheap horror, far more than are sheltered today.) In fact, today's 10-year-olds are probably smarter than the creative team responsible for puking up this abomination, originally titled Spawn of the Slithis. As a lover of bad monster movies of all stripes, I'm here to say that they don't get much worse than this, and that's not a good thing. 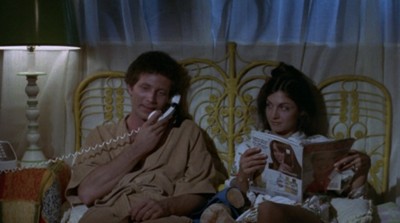 An eco-horror third-stringer, Slithis examines the perils of attempting to turn radioactive silt into a part-plant/part-animal super creature that's all terror. Or something like that. The important point is that an evil corporation is at the center of the controversy, trying to cover up slaughter and mutilation with some line of bullstuff. But you know what, a discontented high school English teacher appears, digging to get to the bottom of the slithis (the code name given to the radioactive silt). Teacher Connors (Alan Blanchard) is aided by his plucky wife, and the nerdiest high school Chemistry teacher this side of nerd-ville. Jeeze, will these amateurs be able to solve the mystery, slay the beast, and stick around for a possible surprise ending? Wouldn't you like to know.

Yes, you'd like to know, but you really shouldn't stick around to find out, since in between monster action is about a solid hour of pure padding. Nothing happens in this movie without a good five minutes of discussion, including plenty of dramatic pauses. People sit, stand, and walk; and they talk, talk, talk. No scene is worth shooting just once. Even comic-relief bums get a chance to chew the fat, talk about crapping their pants, walk around, sit back down and talk some more. Then one of them gets up and walks around some more - poorly milked for laughs far too long - before being assaulted off-screen. Worse, entirely unnecessary subplots develop in detail, simply to move characters from one location to another. Slithis is not exactly artful, wasting its pointless narrative on performances hovering around substandard TV-movie quality. 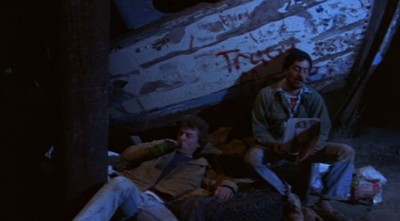 Things look promising after a slow credits sequence. A young boy and his obese friend chase a Frisbee around a canal in Venice Beach, frolicking in slow motion while the soundtrack spews a comical fife corps type song. Then they find some mutilated dogs. Soon a man in a cheap rubber suit, with the worst case of fish-vision imaginable, kills a few people. All promise then evaporates, so just skip forward an hour to the final scenes of monster action - that's why we're here, right? Only if you choose to sit through the entire film, (which I'm told is the proper thing to do) you'll be so enraged by the dismal, infuriating experience that you won't enjoy what little is left. A little bit of tame gore and a cruddy monster suit aren't enough of a reward for sitting through some of the most stultifying, static place-holder nonsense ever put on film. 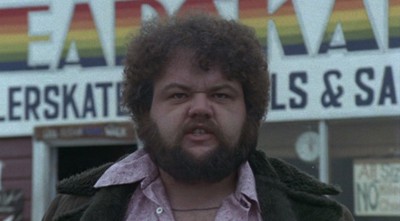 Video:
Code Red delivers Slithis in a 1.85:1 ratio enhanced for 16 X 9 TVs. My screener is a check disk, so I assume it to be final quality, but can't be 100% positive, but the print looks to be in decent shape for such a junker of a movie. Grain is evident, film damage crops up regularly, but only in a handful of incidents is it distracting. Mastering problems don't seem to be an issue, however, so if you can get past the rough spots in the print, you'll probably feel OK.

Sound:
Dolby Digital 2.0 Audio in English is slightly quiet, unless someone's screaming, at which point it gets pretty loud. The sound is clean and distortion free, though sports a fairly limited range, and creative sound design doesn't seem to have been a priority.

Extras:
The Slithis Trailer and a handful of other Code Red Trailers are the only extras.

Final Thoughts:
Slithis is terrible. Possessing a small few hilarious exploitation elements - not the least of which is potato-head-in-a-turtleneck, an unfortunate mutated radiation scientist - this movie gives bad movies a bad name. If it weren't so clumsily padded and boring, psychotronic fans might have a ball, but in truth only those strictly starved for bad entertainment should check it out, while most should Skip It.