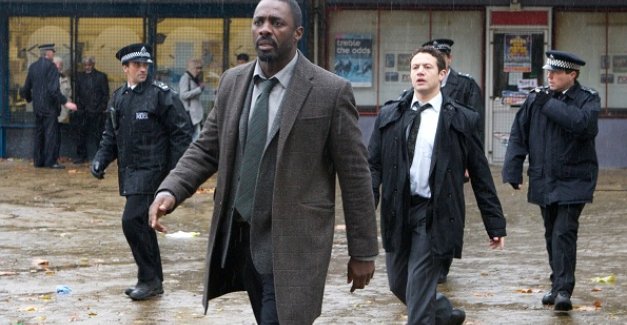 The BBC police drama Luther,
starring Idris Elba as a London detective, generates suspense and entertainment
value without ever doing anything outside of genre conventions. Its
grittiness is too slick to feel dangerous, its characters are familiar,
and its larger story arcs too predictable. Yet Elba is forceful and
appealing, and his DCI John Luther has more than enough flaws and dark
places to make the character compelling. The show displays a certain awareness of its own edge, but I wanted it to push the envelope even more, despite moments of real polish and even excellence.


Created and written by Nick Cross, the first series of Luther
comprises six episodes that maintain a careful balance between episode-specific
plots and series-long story arcs. John Luther is a cop tormented by
a sense of empathic injustice he feels on behalf of the victims of the
crimes he investigates. In the opening episode, Luther is seen extracting
information from a child-killer who hangs above a gaping chasm. After
getting what he needs out of the killer, Luther watches, frozen, while
the killer slowly loses his grip and falls several dozen feet.

In this scene, as in many others, Elba's characterization captures the
fidgety dueling impulses within Luther. We see him at once grappling
with a desire to punish the killer, as well as with an understanding
of the limitations of the laws he upholds. Luther is a good man, no
doubt, but he has to manage some serious self-destructive tendencies.

The killer survives the fall, and spends much of the series in a coma.
Luther, however, is cleared of wrongdoing by an internal investigation,
and is back to work after a few months. His first case involves what
looks like a home invasion gone bad: a middle-aged couple is gunned
down, along with their dog. Luther almost immediately suspects their
daughter, a chilly, intelligent red-haired siren named Alice Morgan
(Ruth Wilson). But without physical evidence to connect her to the crime,
Luther has to let her go. Luther and Alice are both intellectuals with
a complex grasp of right and wrong, and of their respective and somewhat
iffy positions on either side of the criminal divide. This relationship
continues to develop throughout the season, at some points reaching
odd and interesting places, and at other times appearing too contrived.
In particular, Alice's more moustache-twirling, Moriarty-esque moments
are a bit rich with vaudevillian villainy.


Also at the forefront of the ongoing plot is Luther's relationship with
his estranged wife, Zoe (Indira Varma), who has taken up with another
man, but who remains in a precariously vulnerable position of with respect
to Luther's rage over their split and Alice's ongoing stalking of her.

Elba is commanding, to say the least, in the title role. His charisma
is probably the major reason Luther
works as well as it does; the series, as written, could have easily
been much more hackneyed. Luther's brilliance as a detective often comes
across as too convenient. His investigative techniques are never explored
in any depth. Instead, he intuitively hits on right answer after right
answer. We never really know how he thinks through his police work.
The plot-oriented conflicts that Luther contends with - his relationship
with Zoe, his rivalry with Alice - drive the story's momentum, and Elba
works hard to keep things afloat, turning Luther into a fireball of
energy who is unpredictable and quick-witted. He makes the character
fascinating to watch, despite being under-written.

The 16:9 image is very good. Visually, Luther
has a distinctive polish and style. London is a gray concrete-and-glass
jungle, bathed in the even light afforded by near-constant cloud cover.
Despite the emphasis on gray, the transfer is rock-solid with excellent
contrast and detail. The soundtrack is a strong, direct stereo job that's
effective but not flashy. A strong technical presentation all around.

The sole extra is a glorified half-hour EPK called Luther:
The World of a True Maverick.

Despite flaws, the uneven first series of Luther

shows promise, one that I hope the show's creators continue to refine.
Flawed but highly watchable, Luther
is fitfully compelling entertainment. Recommended.