Films of Rita Hayworth, The 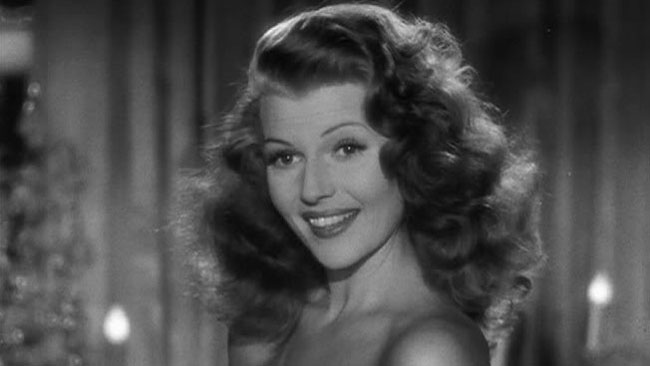 Cover Girl (1944) is a bouncy
musical starring Hayworth as Rusty, a showgirl who goes after an opportunity
to be on the cover of Vanity Magazine's anniversary issue. Her
dance hall boss and paramour Danny McGuire (Gene Kelly) is too proud
to ask her to stay on at her nightclub gig once she's offered the
magazine cover, so he sends her packing. Rusty goes on to become
a Broadway star, on the verge of marrying a big-shot producer, when
Danny returns for the inevitable reunion.

Cover Girl's story is formulaic,
but the Kelly-directed dance sequences are just dazzling. Charles
Vidor's crisp direction keeps us moving quickly past the more groan-inducing
plot points, keeping the musical numbers snappy and fun, despite the
fact that some of the songs lack staying power. Hayworth and Kelly
are joined by Phil Silvers as Kelly's sidekick, and by outstanding
Technicolor photography courtesy Allen M. Davey and Rudolph Maté.

Cover Girl's lasting reputation
owes more to Kelly's genius than to Hayworth's star power, although
her allure is on full display here; without her combination of beauty
and vulnerability, the character dynamics in Cover Girl would
be a drag.

Tonight and Every Night (1945)
is a wartime "the show must go on" story, purporting to tell of
a London theater that manages to maintain an uninterrupted performance
schedule during the Blitz. Hayworth plays the hall's star performer,
Rosalind Bruce, who, along with her fellow dancers, keeps a stiff upper
lip throughout nights of bombing, putting on show after show and falling
in love with a British pilot (Lee Bowman) to boot.

The film is memorable for its bold
design, inventive musical numbers, and lush color photography.
Directed by Victor Saville without a whole lot of concern for story
or character, this is a vehicle for the film's visual team, including
Rudolph Maté (DP, again) and production designers Lionel Banks, Stephen
Goosen, and Rudolph Sternad, as well as costume designers Jean Louis
and Marcel Vertès. The skeptical viewer will have a hard time
accepting the flawlessness of this theater's purported productions
and the richness of their design during the strictures of rationing,
to say nothing of the presumed inability of the cast and crew to obtain
new materials and equipment in bombarded London. But Tonight
and Every Night is successful as a spectacle, helped immeasurably
by the dancing of the great Marc Platt.

Gilda (1946) is one of the greatest,
and most twisted, films in the noir catalog. Charles Vidor again
directs Hayworth as the title character, whose creepy husband, Mundson
(George Macready), operator of an upscale underground Buenos Aires casino,
has just hired a hapless would-be grifter named Johnny Farrell (Glenn
Ford) as the casino's new manager. Little does he know that
Farrell and Gilda were once lovers, a relationship that scarred Johnny,
and left him with feelings for Gilda that veer wildly, from disgust
to lust.

Gilda's screenplay, by Marion
Parsonnet, from a story by EA Ellington, is one of the most quietly
bizarre and unpredictably grotesque in film history. The plot's
twists and turns are all bound up with Farrell's perverse, extreme
feelings of love and hate for Gilda, and with the twitchy dynamic tension
that builds between Farrell and Mundson character.

Vidor's direction is oddly but deliberately
paced, lingering here and there on strange moments with just the right
sense of voyeuristic observation. The musical numbers are seductive.
Rudolph Maté returns as cinematographer, and he tempers his elegant
sensibility with a smart infusion of deep shadow. Able support
is provided by the great Joseph Calleia as Detective Obregon, who investigates
Mundson's criminal activities. Gilda is an unmitigated
classic with great, strange depth of feeling - the tension between
Hayworth and Ford is one of the most striking things in noir history.

Miss Sadie Thompson
(1953) is a neutered adaptation of Maugham's story "Rain,"
previously filmed at least twice during the silent era, but more memorably
as Rain (1932) with Joan Crawford. Rita Hayworth was an
excellent choice for the remake, but the timing was poor. The
early 1950s was a bad time for honesty in Hollywood cinema, and Miss
Sadie Thompson's script is a good demonstration of an industry
afraid of human nature.

In this adaptation, Maugham's prostitute
is simply made into a woman with a shady past, and when she arrives
in American-occupied Samoa, the Marines (who include Aldo Ray, Charles
Bronson, and Rudy Bond) compete aggressively for her attention.
The preacher who wants her sent away (Jose Ferrer) is not a shady creep
in the way Walter Huston was in Rain - he's just some generic
Puritanical authority figure. Thanks to the Production Code, the
whole story has been made so vague, we're not really sure what the
hell's going on. It's surprising anyone was inspired to adapt
the material at all, under the circumstances. Miss Sadie Thompson
does share one noteworthy aspect with the other films in this set: outstanding
photography, in color, by Charles Lawton, Jr.

Salome (1953) is a perfunctory
Biblical non-epic with a stage-bound look and a talented cast who mostly
appear as if they would prefer to be elsewhere. Hayworth plays
the temptress of the title, and Charles Laughton plays Herod with less
deliciousness that we expect. Cedric Hardwicke, Judith Anderson,
and Stewart Granger are also on hand to deliver stilted dialogue without
much inflection; Anderson is the only one who offers any sense of drama
- the others seem like they're mostly thinking about what they're
going to have for lunch.

Director William Dieterle doesn't
appear to have had a concept for the movie. He seems to have been
relying upon star power and the familiarity of the storyline.
Even the Dance of the Seven Veils has no real appeal - Hayworth is
a capable dancer, but her movements look like they were designed and
directed by Robby the Robot. Salome is one of the weakest
of the '50s many religious adaptations.

The transfers in this set are all fantastic. Four of the five
were shot in Technicolor; only Gilda is in black and white.
The color pictures all look wonderful, bearing that special and peculiar
unreal look only afforded by Technicolor. Gilda is clear
as a bell. All five transfers show excellent contrast and detail,
with virtually no compression artifacts. Miss Sadie Thompson
probably looks the worst in the set, but it's not by much and likely
due to the scarcity of "flat" prints, since it was (oddly enough)
shot and generally distributed in 3D. Each picture has its original
mono soundtrack, and these are generally very clear. Music comes
across particularly well in Cover Girl and Tonight and Every
Night.

The first four films in the set come with video introductions by
notable fans. Each runs about four minutes. Cover Girl's
is by Baz Luhrmann, who also offers his thoughts on Gilda, while
Patricia Clarkson introduces Tonight and Every Night and Miss
Sadie Thompson. Martin Scorsese joins Luhrmann on the Gilda
piece, which is longer than the others (sixteen minutes). Rounding
out the special features is a commentary on Gilda by critic Richard
Schickel. It's a decent, informative, if occasionally dry track.

Three very good films and two lackluster
ones form a less-than-ideal tribute to the considerable appeal and talent
of Rita Hayworth. A souped-up re-release of The Lady from Shanghai
and her reunion with Glenn Ford in The Loves of Carmen - or
better yet, Pal Joey, with Frank Sinatra - would have made
this a much stronger set. However, Gilda is brilliant,
and the two musicals hold their own. On balance, this set comes
recommended.