Other // Unrated // August 24, 2010 // Region 0
List Price: $16.95 [Buy now and save at Amazon]
Review by Chris Neilson | posted September 30, 2010 | E-mail the Author
Jeff Turner and Kelly McCormick, the subjects of filmmaker Sean Donnelly's documentary I Think We're Alone Now, have a lot in common: both are mentally disabled to the point of receiving disability payments and housing assistance, neither has had a meaningful intimate relationship outside of their fantasy lives, and both are obsessive-compulsive fans of Tiffany, a pop singer whose career peaked in 1987 when she was 16, but who continues to plug away at show biz through soft porn, acting, and music. The sad lives of Turner and McCormick are laid bare in an intimate documentary which borders on the exploitative. 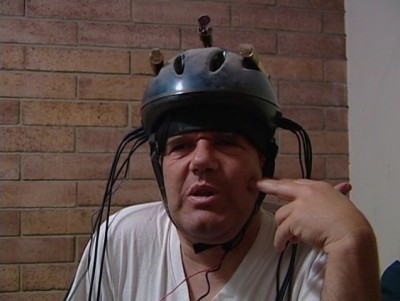 Jeff Turner suffers from Asperger's syndrome, a so-called "high functioning" form of autism, characterized by poor social skills, obsessiveness, and peculiar mannerisms. Turner fills his days with conspiracy theories, Christian fellowship, and obsession for Tiffany. Though the subject of a 3-year restraining order issued when Tiffany was 16 and he was 35, these days Turner finds opportunities to share moments with the object of his obsession at fairground performances and autograph conventions. A believer in the pseudoscience of radionics, Turner has paid more than $20,000 of his disability payments for devices purportedly tuned into Tiffany's brainwaves. 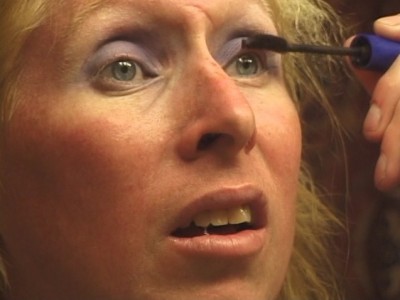 Kelly McCormick claims to be a hermaphrodite though in the commentary she admits that she was actually born a male. McCormick claims that she was raised by her father as a boy and by her mother as a girl, but considers herself to a be a lesbian. Thirty-five at the time of filming though claiming to be 31, McCormick is undergoing sexual reassignment. She claims to believe that Tiffany visited her as a vision while she was in a coma, and that they've been psychically linked ever since, but it's never really clear which stories McCormick is teling for effect and which she really believes.

Filmmaker Sean Donnelly earns kudos for abstaining from providing narration, but loses credibility by contriving to bring Turner and McCormick together in Las Vegas at a Tiffany appearance and by fumbling to construct an unearned upbeat ending.

No music rights or interviews with Tiffany were secured for this decidedly low-budget documentary.

Extras:
Extras include 24-minutes of additional material with Kelly McCormick, Jeff Turner and some of Turner's wingnut associates, as well as the trailer. Audio commentaries are also provided from both Turner and McCormick. Both commentaries include gaps which are sometimes filled with the original audio and sometimes left silent. Turner's commentary includes several conspiracy theories and a new revelation about a restraining order taken out by Alyssa Milano against Turner. McCormick's commentary has gaps that go on for minutes at a time. McCormick is far more hostile toward Turner than he had been towards her. Most significantly, McCormick admits to lying about being born a hermaphrodite, and claims to now have a girlfriend and to be over Tiffany.