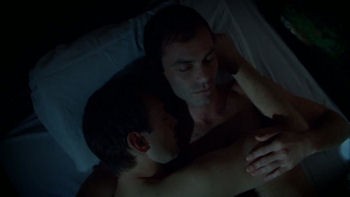 The Movie
Gay-themed films and shows are no stranger to religion and prisons. From Latter Days to Save Me, from Priest to Oz, from Poison to Swoon, the common setting and theme have separately accounted for a wide range of memorable works. Relying on controversial, taboo and often sexual subject matter, these films are usually easy sells to their intended demographic--especially when marketers tease their targets with skin. Like it or not, it's a tactic I've come to expect. But it's the inside that counts, so I'll never judge a film by its suggestive title or cover (in this case, a group of naked men in a prison shower, a setting that will be familiar to fans of films like Penal Pen Pals, Black Balled 7: Jail Slammed, Cell Block Sex 2: The Warden's Lover, (Jeff Stryker Does) Hard Time, Cops & Throbbers and Danny's Anal Ordeal...but I digress).

The latest entry to meet at the intersection of Priest and Prison is Release, written and directed by Darren Flaxstone and Christian Martin--the writers of the modest but meaningful Shank (whose director, Simon Pearce, is the cinematographer and plays a small role). Those two adjective are also appropriate to Release, which does its best with minimal resources to overcome its technical limitations. Sure, it has plenty of naked men (along with references to "bashing the bishop" and nun porn), but at the core this feature is far more skin-deep than its cover might suggest. Father Jack Gillie (Daniel Brocklebank) is a disgraced man of the cloth who finds himself in the middle of a sentence for an apparent crime that is slowly revealed over the course of the film (and takes a path that isn't as obvious as initially suggested). 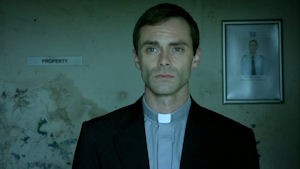 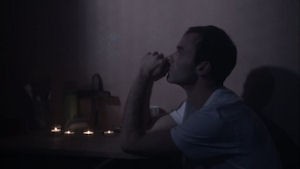 For a few reasons, his Catholic faith has been broken: "The Church exists for denial...it's rooted in guilt, steeped in hypocrisy. In fact, it actively promotes it," he shares, noting he found refuge in music, which helped shield him from the temptation of his hidden sexuality. "Now I'm deaf without it, muted before God." Jack chose his profession because he thought he could make a difference, the same impetus that prompted prison guard Martin ( Shank's Garry Summers) to don his own uniform: "Don't think any of us walk a straight path," he tells his superior. "I'm not that different to them...making choices every day, good and bad. And in the end we are those choices." 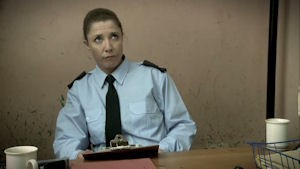 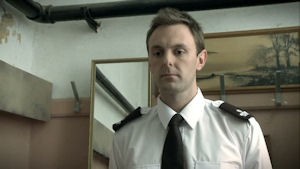 Perhaps it comes as no surprise that the two men have struck up a clandestine romance, sharing tender moments and deep conversation in the dark of night (a concession that might be hard to initially swallow). It's a stark contrast that the filmmakers use to solid effect, their soft and quiet moments at stark odds with the chaos and anger surrounding them (the sounds of the opening scene are just as effective as the visuals). But since they're in jail, you know they're working against the odds. In addition to a lecherous female chief (Dymphna Skehill) that likes to abuse her authority (hmm, a lot of those prisoners and prison guards--which include both of the directors--are conveniently good looking), the duo has to contend with creepy inmate Max (Bernie Hodges, also of Shank). He's worked his way into a position of power with both his peers and Chief Avery, instilling fear into those prisoners on the wrong side of the battle lines. 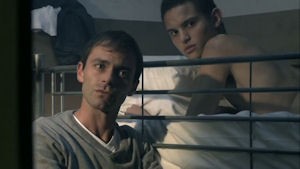 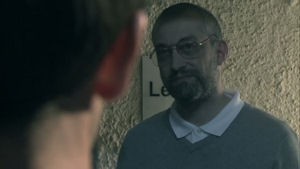 Throw in some indifferent and equally abusive guards, and it's a recipe for disaster. But Jack already knows that--he witnessed it on his first day, watching in horror as his soon-to-be cellmate was violated behind soon-to-be-closed doors. That's just one of the painful memories lingering inside the head of Rook (Wayne Virgo, the lead in Shank), a young druggie with a temper problem trying to make things right--but possibly trying to protect someone on the inside. Not as big and built as his fellow inmates, Rook is often at the mercy of the stronger men--leading the protective Jack to pursue a new cause. But when a violent incident shatters the priest's spirit even more, the path has been set for an inevitable conclusion that pits man against man--and man against God, as the writers throw in a late scene with one of Jack's fellow fathers as the battle between homosexuality and the Church takes center stage, briefly pushing the more immediate danger to the backburner. 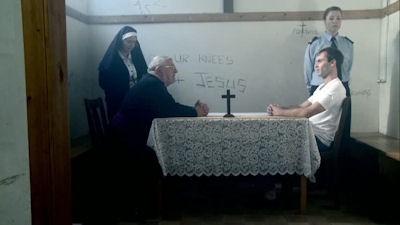 It's all pretty heavy stuff, and to their credit the cast handles it with sincerity and maturity. There are a few key sequences and reveals that are pretty powerful if you surrender yourself to the story, the film honing in on themes of faith, forgiveness and rebirth. There's more than one arc here and all of them are pretty deep, frequently depressing and sometimes cathartic. Flaxstone and Martin make heavy use of imagery and editing, giving the film an appropriately poetic look and feel (water, darkness and light are recurring elements). 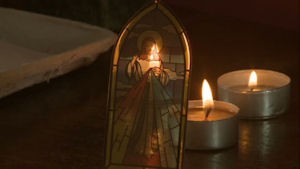 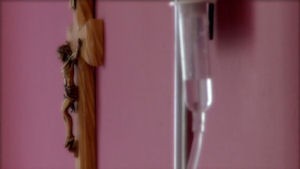 Those tricks are necessary because of the effort's modest budget--and if you aren't able to accept the visual limitations, you might have a hard time buying into Release. The prison looks like an old college dorm, and you get the sense the filmmakers propped up portable bars in front of the camera to create an illusion. The cells are also shockingly private, allowing Jack and Martin to get away with their highly improbable affair. And despite the canned crowd noise that attempts to add a bigger scope to the film, I counted about nine total prisoners, all decked in jeans. It all looks and feels a little lightweight, with a low-security, semi-resort feel to it. But in the end, I was easily able to get past this--if you view the film as more of a stage play brought to the screen, it feels more appropriate (even if the setting and the prisoners don't always come across as "real" and menacing as they could). 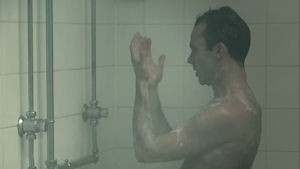 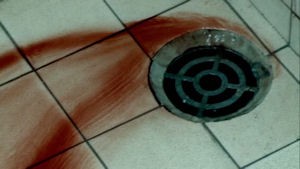 But it's the other mistakes that keep Release from being as effective as it could be. While the opening segment is great at immediately drawing you in, I question whether immediately revealing the scandalous affair is a good idea. By planting us right in the middle of it, we miss that building tension. Seeing the relationship build and grow over time would have ultimately resulted in a more passionate dynamic--and a more passionate film. Still, this is a small difference of opinion--and both Brocklebank and Summers do a solid job with the material. 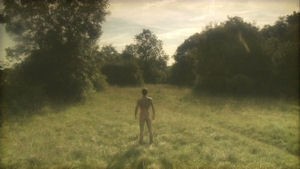 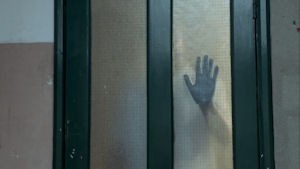 If only the script didn't rely on so many isolated sound bites that came across--pardon the pun--a little too preachy. Our lovers--and main villain Max (who isn't helped by Hodges' slow and careful delivery, which only shows one note)--often speak like they're quoting scripture, literature and adages like they're going out of style: "Even in darkness, there is light", "We're defined by the choices we make", "They say cleanliness is next to Godliness", "God moves in mysterious ways"...do people talk like this so much?! Of course they don't. These lines might work if there weren't so darn many of them and they weren't used so quickly; the film needs to ease us in with more believable dialogue and exchanges before throwing these clichés our way. Their sheer volume ruins a few moments that would otherwise be stronger, primarily the final key exchange between our rivals--an acceptable time to break them out if we weren't already immune to their power. 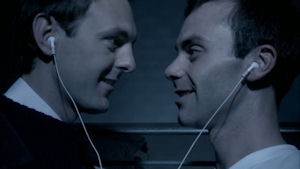 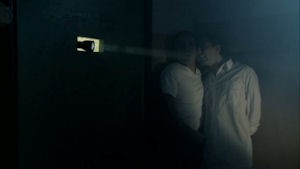 And that brings me to the ending, which is so obviously telegraphed and doesn't hold a single shot of surprise. You'll be about 10 seconds ahead of it, crafting the storyboards in your head right before they play out on camera like a poor man's version of the coronation sequence in Carrie. Flaxstone and Martin ain't De Palma, and this isn't the best way to close their heartfelt work. It's not so much the end result I question, it's the execution that bothers me--the lasting impression is hammy, not a note you want to exit on. Still, I appreciate the overall heart and soul that went into Release, a small film with big ambition. It tackles some lofty issues and aims to start a dialogue, and even though it ventures into unnecessarily overblown theatricality a few times, it never loses its heart and soul. 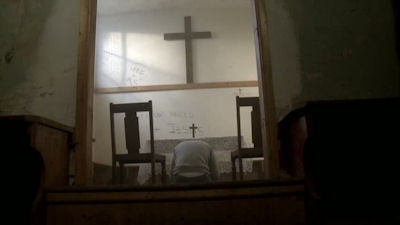 Video:
The disc provided for this review was a screener, so it's unclear whether this represents the final quality. The anamorphic widescreen 1.78:1 image was good if not great. The picture maintains a dull and hazy look most of the way, which seems intentional. While long shots often lack sharpness, mainly close-ups reveal nice detail, like the reflection off of eyeglasses and solid skin tone detail.

Audio:
This screener had an English 2.0 track, which is apparently the primary option. A 5.1 option supposedly exists on the final product, as do optional English subtitles for the hearing impaired. The track was again decent if not very deep, contributing to the modest feel of the picture. Combined with the various accents, a few lines here and there aren't as clear and understandable as you might hope.

Extras:
This screener didn't have a menu much less any extras. The final pressing is supposed to include extended scenes, bloopers, a photo gallery and trailers.

Final Thoughts:
Like their previous entry Shank, writers/directors Darren Flaxstone and Christian Martin have crafted a modest yet meaningful work. This one tackles some serious issues involving faith and forgiveness as a gay priest fights a few battles--both physical and mental--in prison. While the film is limited by its budget and forces us to buy into the sparse sets and small cast, the filmmakers make the most of it. And while it veers into unnecessary theatricality with its proverb-heavy script and poorly executed finish, it still conveys some truly powerful moments if you surrender to its style and imagery. Rent It. 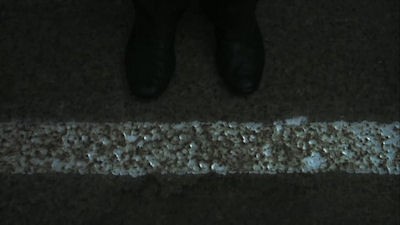