TLA Releasing // Unrated // December 7, 2010
List Price: $19.99 [Buy now and save at Amazon]
Review by Cameron McGaughy | posted February 8, 2011 | E-mail the Author
"We all play different parts when we're around different people...we're all a little cautious about really letting other people see who we are. We all have certain layers and boundaries and walls that we put up to protect ourselves. Intimacy is a terrifying thing." 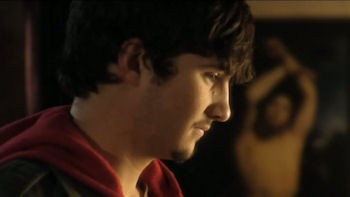 The Movie
When we first meet the hustler, he's barely visible. He's mysterious, our perception of him shaped by John--a muscular Russian who has brought our protagonist back to his apartment for sex. John is nervous and excited, the hustler representing an almost-untouchable object of affection that has shaken his already questionable confidence. This is John's first time with a man (that violent incident with his friend when he was young didn't really count, right?), and like a bolt of lightening the hustler has fueled his excitement. That sexual awakening adds an erotic energy to the room, magnified by the heavy breathing and the beads of sweat that cover John's forehead. His heartbeat is racing, and so is ours..

Strapped instantly thrusts us right into the middle of a sexual firestorm and makes no apologies for it; the film sets a mood of mystery and tension right from the opening frames and never loosens its strong grip. There's something refreshing about a film that embraces its identity so assuredly, and unlike so many other small gay-themed indie films that try to be all coy, silly and shocking with their "wink-wink" sexual tendencies, this one has a grown-up sensibility that doesn't mask any shortcomings. Rest assured, this film isn't for the frigid--there's dirty talk and flesh waiting around every corner. But while some sequences seem to unfold like a softcore porno if you simply focus on the superficial, the performances, the dialogue and story never do. For all its bravado, Strapped is about something far more meaningful than titillation--it has a purpose, it just wants to have fun along the way, too. 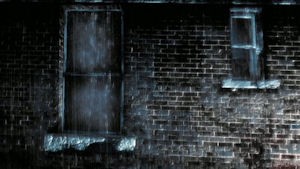 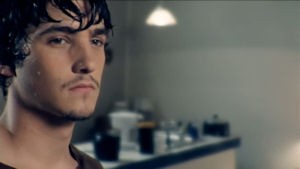 At the end of the hustler's trick, we learn his name is Alex...but we're wise enough to know it's a lie (right?). It's the first in a series of lies we're about to hear over the next 90 minutes--but determining who's lying (and who sees through them and who is being used) is part of the film's lure. As our hustler leaves his john's apartment, he makes his way down the hallway...but there's something funny about this building. Where is that dang exit, anyway? And who are those odd gypsies singing and dancing in that dark room? Our hustler is about to get lost--in more ways than one--as he tries to find his way out. Of what, you ask? That answer may change along the way as he navigates a series of chance encounters with apparent strangers, an odd motley crew that would do David Lynch proud. (The walls that confine him here clearly have a deeper meaning.) 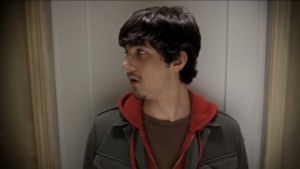 Before his night is over, our hustler (Ben Bonenfant) will have a lot of sex. He will also be questioned and doubted by John (Artem Mishin) before falling victim to a case of mistaken identity (or is it?) with Leon (Carlo D'Amore), a colorful Chatty Cathy in the middle of a night drinking and drugging with his three buds: the forward and shirtless Dirk (Raphael Barker), shy writer Gary (Nick Frangione) and quiet and brooding Tommy (John Keirnan, rocking a killer stare). Our hustler also looks familiar to married man David (Michael Klinger), who strikes up a conversation; and eventually is tutored by elder Sam (Paul Gerrior), the most mature of the strangers. Our hustler's name changes through each encounter--as does his demeanor, which adapts to each situation. As the film draws to a close, he re-encounters one of the men, leading to some self-reflection and an end that may surprise some viewers. 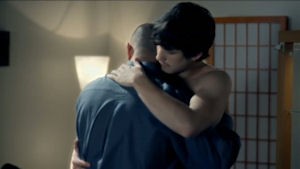 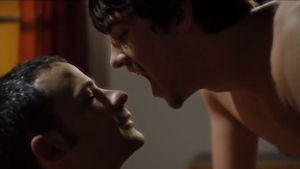 From the opening shot--where rain surrounds us as we zoom in on a window of the brick building, which has an almost otherworldly, fantasy-like look to it--we can tell that writer/director Joseph Graham has something seductive and mysterious up his sleeve. Like the hustler, we're always slightly suspicious of our surroundings, and we quickly learn to trust no one. Each person he encounters brings with it a whole new set of rules and dynamics, but the common denominator here is power and control--over our own identity, in our relationships and in sexual exploration. We are witness to a sense of longing, loneliness, lust and--maybe, just maybe--love through the eyes of a variety of diverse men, each in need of something different as they explore their issues with intimacy. 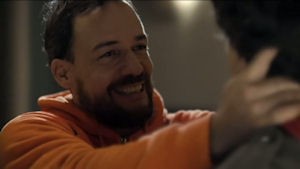 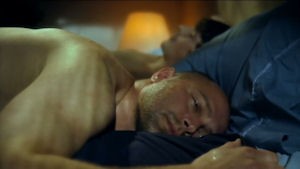 By shifting like a chameleon, the hustler learns how to adapt to each personality--and gets what he wants in return, often so slyly that his targets don't see it coming. Bonenfant is fantastic in a demanding role, and what's particularly impressive is how quietly he alters his mannerisms and demeanor. He sneaks up on you, and you learn to appreciate the subtleties in his performance--whether it's a slight glance, an exhale, contemplative eyes or an adjustment of his voice and attitude. You may think you know what the hustler after and what's expected of him, but it isn't always that simple--especially when the strangers turn the tables, forcing him to question his own perception and reality. I found it fascinating trying to decipher when the hustler was telling the truth, when we were seeing the "real" him and when he felt doubt, suspicion or threatened. Which of his actions (a hug here, a shoulder to cry on there) are genuine and which are artificial? The movie is all about perception, motives and the labels we sometimes define ourselves by; but Strapped (thankfully) isn't so easy to pin down. 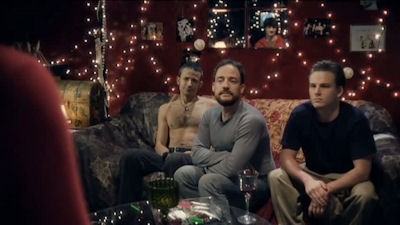 And even though we're witness to a never-ending display of sex, it all feels remarkably organic and honest. This is more of a thinker's film than people might give it credit for, especially those out for a quick thrill (which, if that's what you want to see, Strapped can certainly provide). Two encounters in particular highlight the film: The intensity between the hustler and David is off the charts, and Bonenfant and Klinger are able to shift power roles back and forth in a matter of seconds, giving the film its most potent encounter--at once both seductive and scary.

And the spirited D'Amore is magnetic as Leon, a hot mess who spars perfectly with the hustler. There's a great tempo and honesty to the exchanges within the group during this scene (quite an achievement considering what we're dealing with), which shows how much fun the film is having amid some serious material (the script is very funny when it wants to be). The entire cast is fantastic (Barker--seen in the similarly themed Shortbus--stands out as a confident and perceptive instigator), and the actors go a long way in making you buy into material that lesser talents would have failed. 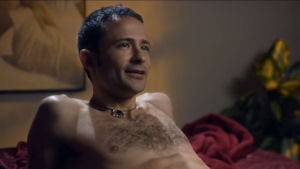 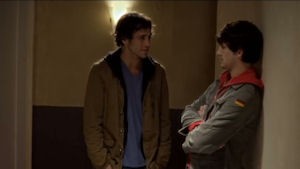 In addition to the script--which is filled with lines poignant and funny (and gets in a few gay cinema tributes as well), Graham also has to be applauded for his pacing. For a film that often plays like hit of ecstasy, it isn't afraid to slow things down and take its time. Many scenes are marked by contemplative silences that signify intense emotions, be it fear or arousal (or both, as it turns out). The director also uses the storm outside as a character in itself, the ever-present sound of raindrops creating an even stronger sense of arousal and mystique; a great score (by Inu) and songs (an integral part of the film) also mesh well with the material (save for one late selection, which felt like the wrong choice for such an important moment). 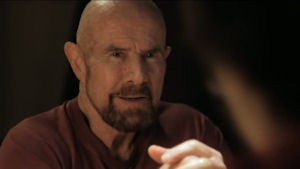 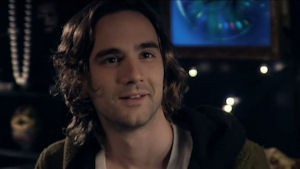 As for the end, I wasn't expecting it and I didn't fully "feel" like I was supposed to, but it was close enough. The film sets itself up as a big mystery with potentially cosmic answers (Is the hustler a savior? Is he even awake?), but the ending doesn't feel quite as grand or ambitious as what preceded it. It proves to be surprisingly simple given the set-up, which may be the point. Nonetheless, I didn't buy one key development that could have been more believable given a shift in one character's performance, my one sizable gripe about the film (but maybe that's because I'm a pessimist at heart). I would have played a few scenes a little differently--my biggest wish being a more ambiguous and unclear final shot (I also felt that we should have stayed with the hustler, meaning that any time he wasn't in the room, we shouldn't be either). 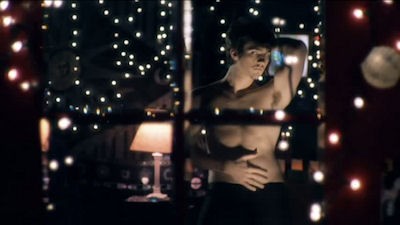 Note: Graham dedicates the film: For Joey Lynn
"I took his drug, and all came out right in the story."
R.I.P. Good Friend

Video:
There are moments when the 1.78:1 anamorphic transfer appears a little too soft and almost blurry with a few shots, but I began to realize that was probably intentional given the almost dream-like trance that some scenes suggest. The pic often impresses, with details like forehead sweat and spare hairs showing nice clarity. Grain and some minor splotching (noticed a few times on flesh tones and dark backgrounds) keep it from being as solid as it could be. Overall, a decent looking effort.

Audio:
You can select from a 2.0 or 5.1 option; I opted for the latter, but it just sounded like a 2.0 effort. Virtually no rear-channel effects to speak of, not that the talky film really lends itself to impressive audio opportunities (still, if anything gives you a chance to impress, it's a rainstorm--yet the opening shots made zero use of surrounds). Dialogue was always solid; again, a decent effort. English subtitles are available. 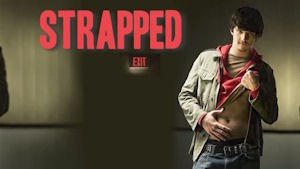 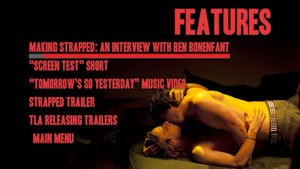 Extras:
Leading the way is the one semi-substantive bonus feature, Making Strapped: An Interview with Ben Bonenfant (16:49, full frame). The leading man sits down in front of the camera to share his thoughts about his character and the film as behind-the-scenes clips roll while he talks (it's cute watching him get dance instructions!). It's a great listen that shows how much thought and preparation he put into the project--and how much respect he has for it. He talks about the challenges of approaching each different persona and making them work; how he relished tackling something removed from his usual "romantic hero" roles; trying to understand the character and story from a homosexual sensibility (he's straight); what writer/director Joseph Graham wanted people to walk away feeling (sadly, he doesn't contribute to the extras); and about how the movie's themes are relatable to people of any sexuality: "This is a movie about the lines that people try to draw between physical intimacy and emotional intimacy, and the effect that intimacy has on people...anyone relates to that. This is a story that's riddled with human truths." 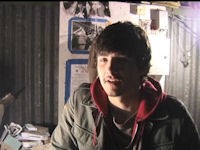 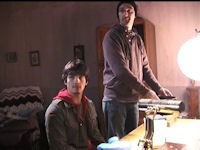 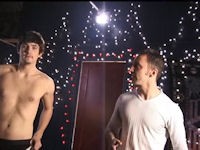 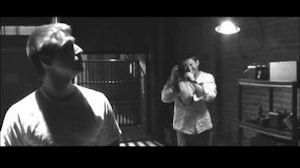 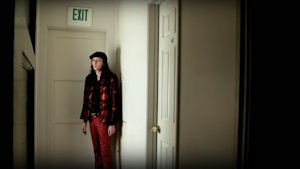 The music video (4:43) "Tomorrow's So Yesterday" by Windows to Sky is next, incorporating scenes from the film. The film's effective trailer (rocking a great and very appropriate song, Halou's "It Will All Make Sense in the Morning") and trailers for other TLA releases complete the package.

Final Thoughts:
Power, control, perception, motivation, sexuality, self-worth, freedom...just a few of the themes running through Strapped, a mysterious, funny, highly erotic effort fueled by fantastic performances led by Ben Bonenfant as a chameleon hustler lost in an apartment of oddities. Confident and assured, the film isn't ashamed of its identity as it explores intimacy, embracing its naughty nature as it envelops us in a tale of sexual awakening, self discovery and the labels we use to define (and often limit) ourselves. While I wasn't completely sold on one key development and the ending doesn't quite live up to the exciting build-up, this seductive journey is easily worth it. Recommended. 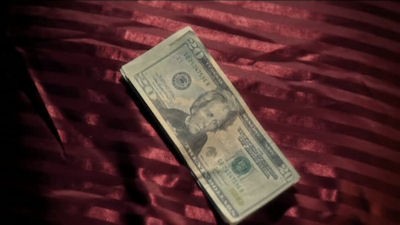