Sun Behind the Clouds: Tibet's Struggle for Freedom, The

Zeitgeist Video // Unrated // October 19, 2010
List Price: $29.99 [Buy now and save at Amazon]
Review by Chris Neilson | posted October 26, 2010 | E-mail the Author
Every year on March 10th, the Tibetan exile community around the world commemorates the 1959 Tibetan uprising against China -- an armed rebellion that was brutally put down by the Chinese military. In the wake of the failed insurrection, the Dalai Lama, Tibet's temporal and spiritual leader, and nearly 100,000 Tibetans went into exile to escape Chinese persecution. In the years since, as hundreds of thousands of non-Tibetan Chinese have settled in Tibet, more Tibetans have been tortured, imprisoned, or exiled during continued unrest.

In the years immediately after the 1959 uprising, the Tibetan exile community was unified in seeking complete independence for Tibet, but since the 1980's the Dalai Lama, seeking a rapprochement with China, has advocated a so-called middle-way which would allow China to control Tibet's external affairs, while restoring complete internal autonomy. However, after nearly thirty years of advocating this policy without any concessions from the Chinese authority, many frustrated Tibetans in exile are ready to again press for full independence. The tensions within the Tibetan community between the Dalai Lama who continues to seek rapprochment with Bejing and a younger generation of leaders seeking independence is the subject of The Sun Behind the Clouds: Tibet's Struggle for Freedom (2010), a documentary by the husband-and-wife team Ritu Sarin and Tenzing Sonam. 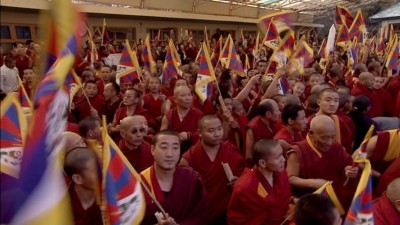 Sun Behind the Cloud includes footage shot both inside and outside of Tibet in 2008 during the unrest marking the anniversary of the 1959 uprising. Capitalizing on the heightened world attention proceeding the 2008 Summer Olympics in Beijing, demonstrations and riots broke out in Tibet's capital of Lhasa, as well as in Buddhist monasteries outside the capital. While beyond China, independence advocates staged a 2500 kilometer protest march in India and attempted to disrupt the Olympic torch relay in cities across the globe. Although independence advocates stepped up their separatist efforts, the Dalai Lama continued to advocate for a non-confrontational solution during his spring 2008 speaking tour of Europe. 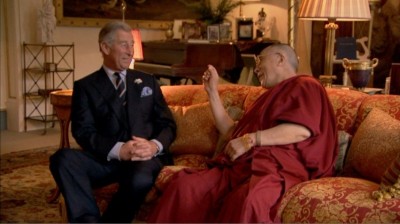 Protest footage is intermixed with talking heads interviews with the Dalai Lama and numerous Tibetan political and cultural luminaries. The documentary also features a delightful guitar score by Gustavo Santaolla, best known for his score for Brokeback Mountain. Though not an advocacy film per se, the narration by Tenzing Sonam is reverential to the Dalai Lama's historic political leadership and continued importance as a spiritual leader, while subtly tilting toward the confrontational approach of the independence advocates. 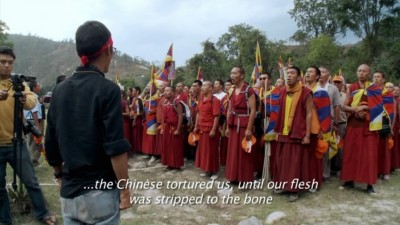 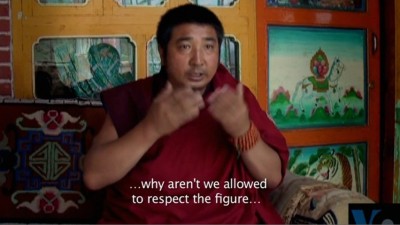 The English, Tibetan, and Mandarin audio is presented in stereo which is mostly crisp, featuring a dynamic score. English subtitles are forced for the Tibetan and Mandarin dialogue, but optional for the English dialogue.

Extras:
Extras consist of a two-page directors' statement, a 37-minute interview with the Dalai Lama which is excerpted in the main feature, seven minutes of deleted scenes, and a theatrical trailer.

Final Thoughts:
Though neither incisive nor definitive, The Sun Behind the Clouds: Tibet's Struggle for Freedom stands out from the general flow of Tibet-related documentaries by highlighting the growing tensions between those Tibetan exiles continuing to seek rapprochement with China and those seeking complete independence. Though not essential, Sun Behind the Cloud is worth a look.