Sporting a strong cast of character actors, Mark Young's "The Killing Jar" should have been an easy slam dunk of a b-movie. Taking place entirely in a small country diner, late one night, the film begins as a slow burn introducing us to our cast of characters, led by waitress Noreen (Amber Benson). Young's direction and writing show signs of strain almost immediately as Noreen engages in banal, tedious conversation with regulars Lonnie (Lew Temple) a dopey cop and Hank (Kevin Gage). We get glimpses at other characters, including a vapid young couple, a businessman named Dixon (Harold Perrineau), and a cook who never appears to directly interact with any other characters in the diner, played by none other than Danny Trejo. 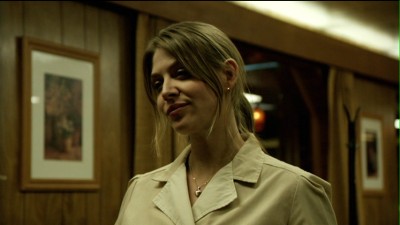 Young's build is pointless the moment Michael Madsen's character (I can't recall his name ever being uttered), I'll call him The Drifter walks in. Madsen, never one to play things subtly blows up at Noreen, demanding food, before settling for coffee. Now, with tensions obviously high and the mention of a murder in a town nearby relayed via the radio moments before The Drifter wanders in, it's not long before mistakes are made, tempers are fueled and The Drifter momentarily leaves only to return delivering swift violence upon patrons of the diner via an oversized shotgun. With an hour to kill, Young quiets things down and leaves the terrified survivors at the mercy of a madman. It's a cruel hour to both them and viewers as little happens that carries meaning or substance. Young's script translates as a moderately interesting short film stretched too far and isn't helped matters by a terrible performance from Benson and over-reaching shrieks from the young female of the previously mentioned nameless couple. 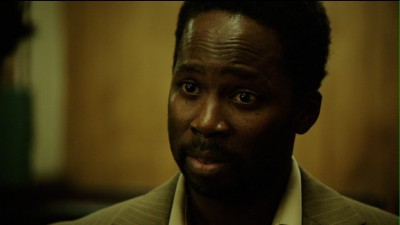 It's a pitiful shame the movie goes wrong so horribly, as Madsen does make an indelible impression, mildly channeling some of that quiet prelude to bursts of violence that made him so memorable as Mr. Blonde. Additionally, Harold Perrineau gets a chance to shine in the last act of the film, as The Drifter slowly interrogates the diner patrons, due to an incredibly contrived plot complication Young throws at the audience early in the second act. In fact, the hokey twists continue into the third act and right up to the closing moments, showing exactly how thin "The Killing Jar" is. Keep in mind though, Madsen's one foil throughout the film is Noreen the waitress and any hope of these contrivances working in the slightest end the moment Benson opens her mouth. 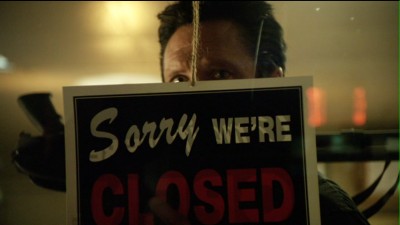 While Madsen may bring some lazy subtlety to his role, Benson is awful to put it nicely. Even with a shotgun in her face, Benson still manages to look befuddled, unable to process what is going on. My only explanation is she must have left the house in a hurry the day certain pivotal scenes were shot and this confused look on her face is Benson, the person wondering if she locked her door. Her scenes bring the movie to a screeching halt, counter the solid B-movie exchanges between Madsen and Perrineau as well as Madsen and Gage. Sprinkle the occasional inconsistent scream from the unnamed female customer, and what little solid ground "The Killing Jar" had is taken out from under its feet.


Simply put, "The Killing Jar" is a moderately interesting idea terribly executed, punctuated by performances that span the spectrum from "please, no more" to "not bad," cinematography that is initially stylish, but by the end of the film, after spending 90-minutes in the same small location will make you want to vomit, and moments of extreme violence that feel added for shock value, not to mention look very amateurish, and you have a film that isn't even worth checking out on cable. A somewhat noble effort from Young, but too much goes wrong to give him any more praise than that.


The 1.78:1 anamorphic widescreen transfer runs a little hot on the color palette, while detail is above average. There's a minor hint of compression issues around some of the heavy neon lights outside the diner as well as the lighting inside. That aside, the transfer renders the eventually nauseating cinematography rather faithfully.


The English Dolby Digital 5.1 audio track is not as hot as it should be. Directional effects are noticeable a handful of times, being this is a largely dialogue driven movie. A few action beats kick things up a notch, however, there's noticeable distortion during sharp noises. For instance early on when Madsen's character barks an order, at the height of his exclamation the track shows it's wear just a bit. Not terrible but not acceptable for a modern production. English and Spanish subtitles are included.

Terribly pacing, eventually ugly looking cinematography, and a terrible lead female performance from Amber Benson overshadow any redeeming value that might have been scavenged from "The Killing Jar." Add to that, a not quite right technical presentation, and you're better off renting a better straight-to-DVD thriller featuring Michael Madsen, because he doesn't do anything here that he hasn't done better in other, better movies. Skip It.