Lionsgate Home Entertainment // PG-13 // January 4, 2011
List Price: $29.95 [Buy now and save at Amazon]
Review by Kurt Dahlke | posted January 3, 2011 | E-mail the Author
The Last Exorcism:
I remember when my dumbass older brother told my 11-year-old self that he thought I wouldn't be bothered by The Exorcist. This was in 1980, when kids were innocent, and horrific TV wasn't something you had to actively avoid. So I turned on the tube and made it to the part where Regan's throat is swelling like a frog, her eyes roll back in her head, and her body is violently whipsawed back and forth in her bed like something from a deadly carnival ride. Approaching the TV with eyes closed, I shut it off and didn't sleep that night, because at its heart, the exorcism movie is as much about losing total control of your body as it is about Satan, and for kids hitting puberty (and especially their parents) this is a terrifying thing. Put another way, "make it stop, mommy!" is the word of the day, but in these movies, mommy can't help. You're on your own, kid. 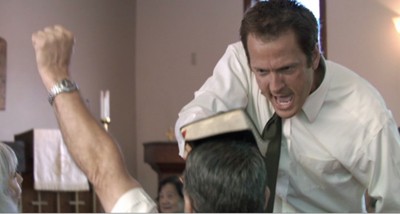 For a good 70 minutes, director Daniel Stamm's The Last Exorcism hits all those creepy marks with a quiet assurance that belies 'Presented by Eli Roth' promotion. So what if the final 15 minutes feel like an entirely different movie tacked on by studio heads who assume audiences are now composed entirely of chimps - the bulk of Exorcism is fine enough that a few recitations of the rosary should absolve all sins.

Cotton Marcus, (Patrick Fabian) our shady hero intent on performing the title act, decides to leave retirement for one last job, exorcising a poor Louisiana teenager under the thumb of her irrationally fundamental dad. Cotton's the type of man who used to turn on crowds of churchgoers with his fiery, populist sermons, he even possesses the exorcist's pedigree. Yet he's not unaware of the degree of simple manipulations inherent in his work. Hanging up his supplice, he keeps up with his brethren through the papers, becoming outraged as he learns of cut-rate exorcists accidentally killing children they sought to save. Which is why he embarks on his journey to save Nell Sweetzer, (the phenomenal Ashley Bell) not to rid her of a demonic spirit, but to free her from a fundamental ignorance he believes holds her in thrall. If he can cure her he'll prove it was all in her head, since he intends to use the exorcism techniques of an old-time charlatan. A dramatic exorcism serves only to make things far, far worse. 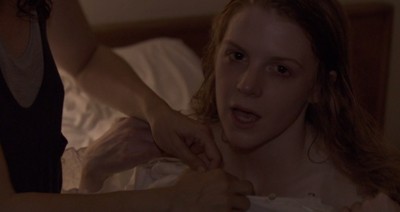 Filmed documentary-style (Marcus asks a camera crew along to preserve his lesson) Exorcism will put off anyone looking for cheap thrills and jump-scares. Very slowly building, so much so you might not be aware of how tightly you're being wound, the movie takes its time with Marcus' back-story, and life at the Sweetzer house. Marcus is rational, arrogant, and funny - he promises to work a recipe for banana bread into a sermon to prove his talent. He's a good target for small-town suspicions coming from Nell's family, a perfect way to sneak in some 'fear of hicks' tension we city folk love and loathe so much. It only tightens those screws a bit more. 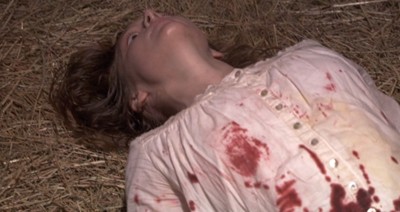 The marvelous Ashley Bell nails her role to a frickin' cross, she's so good. So sweet and innocent you weep for her, you don't really care how she's saved, just that she's saved at all. As revelations pile up and Nell's dad Louis (pitch-perfect Louis Herthum) becomes more unhinged, subtle action begins paying off with skin-crawling scares like Nell's weird movements through the house at night. This really isn't a movie to gross you out, make you scream in mortal fear, or reveal the devil in CGI glory. But for discriminating viewers, Exorcism is supremely creepy, smart and innovative. And then there's that ending, something actually hinted at earlier in the film, but full of hyperbolic conspiracy, rhythm, and intent not found anywhere else in the movie. This stuff is taken seriously enough that it won't really cause you to start raging, just wondering what happened to everything that came before, because when Nell starts twisting around in that barn for the real last exorcism, you'll once again fear loss of control, that primal fear of losing control of your self.

Video:
Documentary-style footage in 1.78:1 ratio widescreen enhanced for 16 X 9 TVs reveals two things: One, this is a nice looking picture with a Southern gothic feel, details are fine in the foreground, fading into evocative lack of distinction in shadowy corners and kudzu-invested byways. Colors are natural but a little pale and stylistically sepia-tinged (very slightly so) to created even more evocative tension. It's a clean picture with no digital defects to complain about.

Sound:
Audio comes in English 5.1 Dolby Digital EX Audio. My puny system can't take advantage of the full glory, but it's clear there are plenty of creepy, tricky bits of placement to unsettle you, and a nice dynamic range that will make good use of your 5.1 system. The mix and all dialog is appropriately engineered to be clear and not too jarringly separated between dialog and sound effects, including a truly unsettling score.

Extras:
Eli Roth and Strike are nice enough to grace us with a good number of extras, including two commentary tracks. There's a Commentary Track with Eli Roth, Eric Newman and Thomas A. Bliss that's well worth your while for its insidery perspective and revelations from conception to casting and more. A second Commentary Track with Director Daniel Stamm and actors Ashley Bell, Patrick Fabian and Louis Herthum is a bit more voluble and lively, containing a fairly different and just as interesting perspective as the first track. The Devil You Know: The Making of The Last Exorcism is a 20-minute featurette that's fairly standard for BTS docs of this sort, but worth a look if you like the movie. You get English and Spanish Subtitles plus Closed Captioning, and a short, disturbing 2009 Cannes Film Festival Teaser Trailer should set you up nicely if you watch it before the movie. Things get genuinely touchy for two reasons with these next two extras. First is Real Stories of Exorcism: Interviews with Actual Victims and Participants. My main beef with this 14-minute extra is the fact that it is essentially one story with one victim interviewed (plus an expert or two who participated). I got all geeked out looking for multiple examples, but at least I got one fairly creepy, very contemporary example that had me wondering. Even more weird, (and carnival barker tricky) the production crew claims to have experienced a number of 'unusual and disturbing' incidents while producing the featurette, so they've taken precautions, including adding a text based Protection Prayer in Latin and English for you to use accordingly. I haven't experienced anything disturbing since - other than the usual arguments with the wife - but we both read the prayer, so we'll never know, will we?

Final Thoughts:
Innovative, supremely creepy and intelligent, The Last Exorcism isn't for everybody - you need a brain and an appreciation of subtlety to really get into it. But I know there are plenty of you out there just dying for this type of thing. A fiery climax seems to come from a different demon movie with entirely different aims, but it's just as solid and gripping as the rest, so you can take it as some kind of weird bonus. Superb performances, characters you care about, and genuine chills make this one Highly Recommended.