Overdose: The Next Financial Crisis (Ironweed # 59)

Ironweed Film Club // Unrated // October 1, 2010
List Price: $19.95 [Buy now and save at Ironweedfilms]
Review by Chris Neilson | posted November 1, 2010 | E-mail the Author
These are dark days for American progressivism. Voters appear poised to turn control of the House of Representatives over to the GOP, while giving the Republicans enough Senate votes to easily filibuster Democratic initiatives for the next two years. While the shift in sentiment among independents is to be expected given the anemic economic recovery with its continued high unemployment, record deficits, and growing likelihood of a double-dip recession, what is surprising is the loss of confidence among progressives themselves. To mark but two instances, in September, Shepard Fairey, the graphic artist that created that iconic Hope poster for Obama's 2008 presidential campaign, expressed disappointment with the President, and now, the Ironweed Film Club, a monthly DVD subscription service renowned for its politically-progressive documentaries, has released Overdose: The Next Financial Crisis, a broadside against government efforts to stimulate the economy through deficit spending.

Since the world emerged from the Great Depression of the 1930s, there has been near universal consensus among mainstream economists that economic depressions could be avoided, and recessions alleviated, through targeted stimulus. While the consensus among economists has mostly remained, opponents of government intervention have made great strides in refocusing public attention to the perceived dangers of deficit spending. Although there's strong evidence to conclude that concerted deficit spending by numerous nations since 2008 averted another global depression, these same governments are now imposing extreme fiscal austerity measures at the risk of killing the still nascent recovery.

Overdose: The Next Financial Crisis is libertarian propaganda. Based on a book by Johan Norberg, a senior fellow at the Cato Institute, and funded by the like-minded Swedish Free Enterprise Foundation, filmmaker Martin Borgs' purpose is to persuade viewers that government efforts to stimulate the economy are more likely to produce merely another detrimental asset bubble than a significant boost to the recovery. 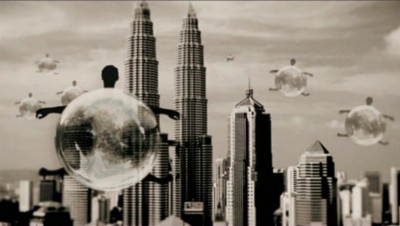 What likely appealed to Laurie Walters, head of aquisitions at Ironweed, about Overdose is how much of the brief 46-minute runtime is devoted to disapproval of Republican-era government interventions which contributed to the 2008 recession. Yet, the intention of Overdose is not to cast yet another stone at past decisions, so much as it is to decry government economic intervention in the future -- an aim seemingly in conflict with the tenor of Ironweed's progressivist programming generally.

Through talking heads interviews, heavy narration, and frequent animation, Borgs presents fiscal and moral arguments against government intervention. The fiscal arguments concern the sustainability and effectiveness of government intervention. However, while the United States government appears set on ceasing efforts to stimulate the American economy, it is not for lack of willing lenders on advantageous terms. In fact, the yield on two-year Treasuries were at a record low in October. Nor is it for lack of effectiveness in its efforts to date: as of October, the government's bailout of troubled banks and insurance companies has earned the government $25.2 billion on its investment of $309 billion, an 8.2 percent return over two years.

Nor has the government's substantial investment in General Motors been the misstep suggested by The Atlantic's Business and Economics Editor, Megan McArdle. In the documentary, McArdle states that it would have been cheaper for the government to give every GM employee a $100,000 severance package than to save the company from failing. However, as with its bailout of banks and insurance companies, the government's decision to save GM now looks inspired. Rather than paying unemployment benefits to the tens of thousands of workers at GM and in its production and distribution chain, the government looks set to recoup much of its investment as GM returns to profitability.

The moral arguments against government intervention concern moral hazard - the notion that bailing out parties for past mistakes will inspire detrimental future risk-taking. While there's certainly some cause for concern, there are arguably better ways of discouraging bad actors than allowing the economy to crash (e.g., better regulation).

Borgs attempts to give Overdose the sheen of better made financial documentaries such as Mark Achbar and Jennifer Abbott's The Corporation (2003) and Alex Gibney's Enron: The Smartest Guys in the Room (2005), but the limitations are telling. Aside from graphics in need of editing (e.g., frequently misusing MD as an abbreviation for billion), Borgs relies on a single camera for his many interviews, resulting in editing of interview segments that is jarring.

Presentation
This release from Ironweed Film Club is available by subscription or individually from the company's website.

Video & Audio:
The material on this disc is presented in anamorphic widescreen (1.78:1).Overdose: The Next Financial Crisis looks to have been filmed in high definition. All of the material suffers from interlacing and loss of detail, but colors and contrast are generally good.

Audio throughout is presented in stereo. Non-English interviewees are dubbed on Summer Crisis, but otherwise non-English dialogue is accompanied by forced subtitles. Finally, the audio of the Chinese interviewees is not synced properly on China Slowdown.

Extras:
I hesitate to call the two segments accompanying the 46-minute main feature documentaries. Created for European public television news programs and lacking any opening and closing credits, the segments are curious additions. Summer Crisis (29 min.), a production of Austrian public television, takes the economic pulse of small business owners and employees in Portugal, Spain and Greece. China Slowdown (11 min.), which looks to be a BBC World News segment, addresses the effect of the global downturn on China's economy, but like Overdose, it already appears dated. Though China Slowdown suggests that the Chinese economy is on the verge of crisis, in fact the Chinese economy has maintained an average annual growth rate of 10% since 2006, with annualized growth of 9.5% in the first three quarters of 2010.

Also accompanying the disc is a bi-folded program notes for Overdose and a director bio for Martin Borgs.

Final Thoughts:
Although Overdose: The Next Financial Crisis is worth a look for anyone interested in economic policy, especially libertarians and small government Republicans, the documentary is available in its entirety on YouTube for free viewing. While Overdose may hold some charm for libertarians, small-government Republicans, and econ-geeks of all stripes, it doesn't seem an appropriate programming choice by the heretofore progressivist Ironweed Film Club.