Alex Cox's "Straight to Hell Returns" is a slightly tweaked re-release of his 1987 cult-classic, punk rock, Spaghetti Western comedy, "Straight to Hell." Cox, never a director to shy away from a challenge, co-wrote the script with Dick Rude, who also steps into the role of Willy, one of a trio of ne'er-do-wells that also include Simms (played by Joe Strummer) and Norwood, whose shoes are filled by Sy Richardson, a tremendously underappreciated actor who should be getting a cut of royalty checks from Samuel L. Jackson, whose cool, no-nonsense routine is very reminiscent of Richardson's style, especially in this film. Also along for the ride is Courtney Love as Norwood's pregnant girlfriend, Velma. Following an unseen bank robbery, our heroes quickly find themselves seeking refuge from the their criminal boss, Mr. Dade (Jim Jarmusch) in a dirty town straight out of any cheaply made Spaghetti Western of the 60s or 70s. 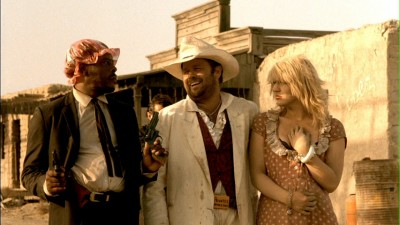 Cox's twist on the genre though is to populate this town with a band of ruffians addicted to coffee, who find amusement in perpetually harassing Karl, the sausage vendor. Once the protagonists roll into town, "Straight to Hell Returns" struggles to provide a compelling story, instead relying on the novelty value of punk rockers like The Pogues in goofy costumes and hamfisted attempts at recalling genre conventions. Cox deserves credit for showing no restraint in piling on the absurdity, but aside from a few standout comedic bits, such as the constant harassment of Karl, Karl's one moment in the sun, leading the town in a jingle for his hot dogs, and an ongoing bit of comic adultery between Simms and Fabienne, the gorgeous wife of the one-step-behind shop owner, "Straight to Hell Returns" spins it's wheels. It takes a dull cameo from Dennis Hopper and Grace Jones to get the movie finally going at full steam, ending in a relatively enjoyable, action packed finale 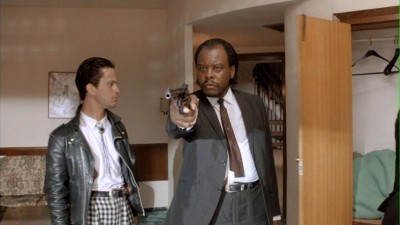 The biggest detriment to the movie's entertainment factor is Dick Rude in a substantial lead role. Unlike his co-stars, the ultra cool Sy Richardson and the equally cool but spacey Joe Strummer, Rude is grating on the nerves, a perennial whiner whose character would be better paired with Love's equally irritating performance as Velma. Rude is best utilized in small doses. Likewise, much of the supporting cast frustrates, looking like they showed up to have a good time with friends, rather than act. Instead of assembling a cast to parody Spaghetti Westerns, Cox succeeds in gathering a group to clumsily make fun of the genre and in turn end up only succeeding in creating a parody of parody. Whether this is intentional, I don't know, but the bottom line is, the movie is tedious and the antithesis of compelling. 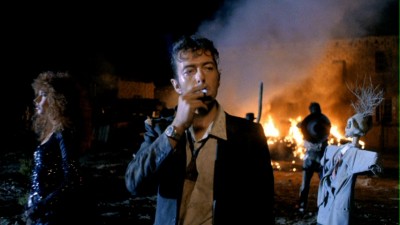 Despite being a generally bad film, "Straight to Hell Returns" is still so far out-there and crazy that it warrants at least one viewing. Like I said above, there are some genuinely funny moments, but they are often stuck between some unfunny and outright boring ones. I'll admit without reservation, the finale is a ton of fun, and I wonder if the whole movie was built from a great idea for such a sequence, as Cox does succeed in his endeavor of a Spaghetti Western parody in the closing minutes of the film. It's just a huge shame that the 60 minutes or so that preceded it weren't operating on the same level. Also worth noting, is the appearance of our heroes, a look film fans will instantly recognize from the films of Quentin Tarantino, with the character of Norwood being an obvious inspiration on Jules Whitfield in "Pulp Fiction." Only here, Sy Richardson is legitimately intimidating, whereas Samuel L. Jackson was incredibly cool, but in a purely Hollywood sense.

Having never seen the original, unaltered "Straight to Hell" I can't point out all the new additions (five minutes in all), but I can confirm, Cox has chosen to digitally add blood to the violence and perform some color correction on the transfer. Shockingly, the digital blood works quite well and is incredibly subtle, unlike the cartoon like blood sprays that populate modern action films like "The Expendables" or "Predators." I'm sure some purists out there will cry foul, but as a first time viewer, I couldn't spot anything that looked glaringly out of place.


The 1.85:1 anamorphic widescreen transfer is still very haggard looking, despite claims of a digital restoration. The sky is full of grain and despite an average level of detail, the print isn't consistent from scene to scene. Fortunately the transfer is free from major digital tinkering, but color levels just don't look all that natural, with blue skies often having a tinge of yellow to them. Perhaps it's a result of the original cinematography or the new color correction, but the movie itself still feels like it could look a little bit better.


The English Dolby Digital 5.1 audio track is pretty much overkill, for a front heavy track. It's almost entirely distortion free, although a few scenes here and there a bit muddled. There's a little bit of life and warmth to the track but some effects are heavily disconnected from the reality of the scenes.


A feature-length commentary from Cox and Dick Rude is the primary extra and it's a very fun listen. Although I didn't care much for the film, I did enjoy listening to the two discuss the story as well as the production. Cox points out some sly additions that Id didn't pick up on, such as the origin of Dennis Hooper's character's name, which does add a subtext to the finale of the film.


The other two extras include Cox's original short film he shot scouting locations that were eventually used during the production, as well as "Back to Hell" the roughly 25-minute retrospective that gathers almost every actor connected to the film (Courtney Love is a notable exception, although Miguel Sandoval's daughter is used in her place) to reminisce about filming. It does confirm suspicions that the production was more about having fun than shooting a movie.

"Straight to Hell Returns" is far from a good film. A generally incoherent mess, it weakly survives on it's devil may care attitude toward the entire filmmaking process as well as two very memorable performances from Sy Richardson (seriously, why isn't this guy used more often?) and Joe Strummer. Fans of Cox will definitely want to grab the disc, while everyone else should just rent it for morbid curiosity. Rent It.