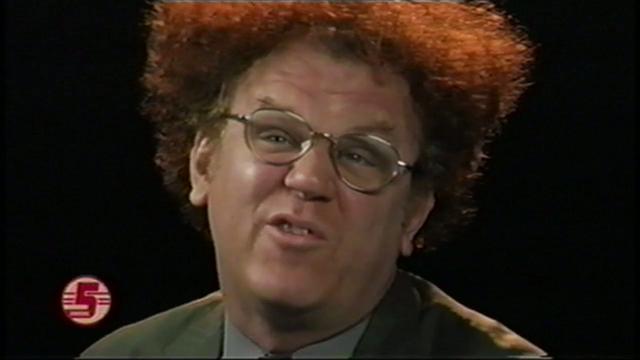 John C. Reilly's Dr. Steve Brule is one of the most likable characters in recent TV history. He first made regular appearances on Tim and Eric Awesome Show, Great Job! beginning in 2007. Brule was a special correspondent for Tim and Eric's fictional Channel 5 News, offering commentary and advice on topics like the human body, stomach doubling (adding a second stomach for the consumption of junk food), and how to drink wine. Exhibiting behavior that straddled the narrow territory between man-child and stroke victim, Reilly's appearances as Brule quickly became a highlight of Tim and Eric's abstract non-sequiturs and grotesquerie. Reilly's electro-fried curly hair, lazy stare, garbled delivery, and what appeared to be semi-improvised dialogue created a character who hardly knows whether he's coming or going, let alone what he's talking about.

Check it Out! with Dr. Steve Brule is a rare example of a well-developed and justified spinoff. Yes, the show can wear out its welcome if you watch these episodes back-to-back - a quality it shares with Tim and Eric's brilliant parent show. But, parceled out one at a time, these are hilarious 11-minute installments of bizarre hilarity.

Like many other regular features on T&EASGJ!, the concept of Check it Out! is that of a program on a public-access cable channel likely viewed by the insane, infirm, or, most probably, no one at all. (In fact, a number of Tim and Eric's regular supporting cast - David Liebe Hart and James Quall, to name two - come from exactly that world.) On Check it Out!, Brule explores his world with the curiosity and intellectual rigor of a six-year-old with a microphone. Each episode focuses on a specific topic ("Health," "Fear," "Boats"), and after opening with a predictably clunky poem, Brule interviews invited guests or provides a field report from a relevant location. The topics provide new grounds for Brule to reveal his intellectual limitations, his inability to connect with other human beings, his lack of social and interpersonal skills, and his childlike lack of physical awareness.

The episodes are all funny - some more than others. Reilly's performance seems to have undergone subtle changes between the six episodes of Season 1 and the six of Season 2. His vocal delivery is slightly different; in Season 2, he emphasizes a certain way of mispronouncing words with added "r"s ("broats" instead of "boats," for example), and his performance generally seems to rely upon a narrower range of tics. In the Season 1 episodes, the character is less predictable - closer to the Brule of T&EASGJ!

Image and Sound
Part and parcel of Tim and Eric's overriding aesthetic for T&EASGJ!, Check it Out! looks like it was shot on video as a no-budget television program. VHS-like editing screw-ups are rampant. But the look of the show is as intended - and the DVD replicates that perfectly well. The 2.0 stereo soundtrack is about as active as you might plausibly want a show like this to be; anything more dynamic would stretch the credibility of the concept.

Check it Out! is one of the most consistently strange and uncomfortable comedy programs ever put on television. Co-created by Tim Heidecker, Eric Wareheim, and star John C. Reilly, Dr. Steve Brule takes us on a tour of the disordered mind of one awkwardly misguided man who has somehow wound up with a 15-minute time slot at 5:00 a.m. on Channel 5. A wonderful collection of episodes that stand up well upon repeat viewings. Highly recommended.