Back to the Garden: Flower Power Comes Full Circle (Ironweed # 58)

Ironweed Film Club // Unrated // September 1, 2010
List Price: $19.95 [Buy now and save at Ironweedfilms]
Review by Chris Neilson | posted November 10, 2010 | E-mail the Author
In 1988, Kevin Tomlinson, a young would-be filmmaker traveled to a "healing gathering" in rural north-central Washington State to interview aging hippies who still adhered to the countercultural values of the '60s and '70s. Though he didn't do anything with the footage then, twenty years later he sought out those participants again to see whether they were still living lives in conformity with the principles they'd espoused then. 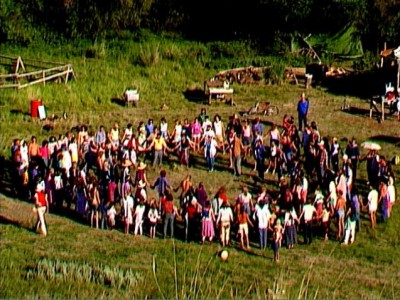 Back in '88, Tomlinson's interviewees were motivated to varying degrees by the desire to live simply, cultivate community, and embrace spirituality. Twenty years later, they're keeping the faith. Although one woman now works for Microsoft and drives an SUV, none appear to live the typical, high-consumption lifestyle typical of boomers.

Two of the men have rejected the siren call of consumerism almost completely. Jeffery Stonehill, a former manager of the Beverly Hills Hotel, now lives in a derelict school bus without power or running water, content to work part-time as a music and language tutor. Skeeter remains an organic farmer and community organizer who lives communally without savings and with few possessions aside from some hand tools and books.

Two of the women, One Pine and Maeyowa, each raised families on rural homesteads while minimizing their interaction with the mainstream culture. As is often true, these mothers have had mixed success passing their values on to their children. Alas, Maeyowa has never met the children of her twenty-eight-year-old son who rejected her values by joining the Navy and loading up on debt to finance an expensive lifestyle. In some of the documentary's best segments, One Pine's daughters reflect on the advantages and disadvantages of their childhoods in clear-eyed detail.

Given that all of the principal interviewees were originally found at a "healing gathering", it's not surprising that unorthodox spiritual beliefs remain prominent among them. From the benign (tree-hugging), to the silly (celebrating fairies), to the cultish (Eckankar spirit travel), Tomlinson presents his interviewees' practices without comment or apparent condescension.

Presentation
This release from Ironweed Film Club is available by subscription or individually from the company's website.

Video & Audio:
Back to the Garden: Flower Power Comes Full Circle has acceptable production values for a documentary of its kind. Presented in full frame with newer material letterboxed therein, image quality generally looks fine on the newer material apart from some digital combing, moiré effect, and digital noise, and the older material looks better than average for twenty year-old analog video.

The stereo audio track sounds fine with clear dialogue throughout and features an enjoyable mix of obscure contemporary folk music.

Extras:
In addition to the 70-minute main feature, this DVD includes a ten-minute short entitled A Circle and Three Lines which provides a cursory history of the iconic peace symbol created by Gerald Holtom in 1958 for the British nuclear disarmament movement. 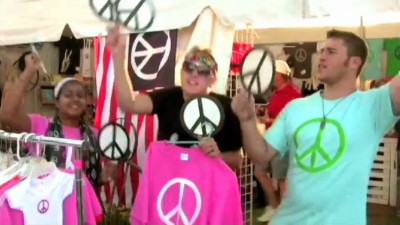 Final Thoughts:
Although not as compelling as some other where-are-they-now examinations of boomer hippies and their children such as Jonathan Berman's Commune or Ralph Arlyck's Following Sean, Back to the Garden: Flower Power Comes Full Circle offers an engaging look at idealism in sustained practice for over twenty years. Back to the Garden is recommended to anyone interested in simple living, spiritualism, communalism, or modern counterculturalism generally.