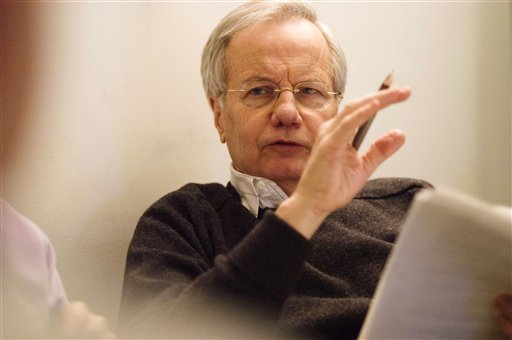 As an interviewer, Bill Moyers is probing,
informed, and just a touch provocative. He is not looking for teary
confessions like Barbara Walters, nor is he as presumptive or obsequious
as Charlie Rose. He is dignified, tactful, and restrained. He lets the
subject speak freely, interjecting only occasional and thoughtful prompts.
He never makes a show of being interested in the people he interviews,
because he is interested, absorbing their points of view with
the attentiveness afforded by a genuine curiosity about the world, the
people in it, and their varied ideas and opinions.


This set from Acorn Media collects sixteen half-hour episodes of Moyers'
1980s interview series "A World of Ideas," comprising conversations
with thirteen prominent writers. Each of these interviews is some fascinating
mixture of writerly self-importance, intelligent talk, revealing insight,
and deep dissection of specific worldviews.

Anyone who's heard a beloved and well-known writer interviewed for the
first time is familiar with the immediate loss of respect that follows
such an experience. Writers are full of themselves and their egos are
at the center of their individual universes. (I should know.) Although
their personalities can disappoint in this sense, their egotism is a
sometimes regrettable necessity. Despite his courtliness, Moyers never
allows his subjects to get out of control, pressing them on their key
issues, forcing them to be specific and concrete when they drift toward
vast, abstract generalization (novelists in particular seem to be prone
to do this). Tom Wolfe, known for extraordinary flights of fictionalized
journalistic fancy, is reined in and made to speak more practically.

From Isaac Asimov and Chinua Achebe to E.L. Doctorow and Toni Morrison,
these interviews survey much of the literature of the second half of
the twentieth century. Revealing and entertaining, they form a lasting
body of work that will be sought by readers and scholars well into the
future.

Acorn presents this set across four discs in slim cases inside a glossy
card box. The image and sound quality is perfunctory, but the content
does not require a tip-top technical presentation in order to be enjoyed.
The '80s-era source material has survived intact, and was probably never
"pristine" to begin with. The image and sound both suffer
from a grayish muddiness, but it's nothing awful.

Acorn has bundled a hefty selection of additional interviews from
Bill Moyers' later programs: "NOW" and "Bill Moyers' Journal."
These feature more recent conversations with Barbara Kingsolver and
Isabel Allende, among others.

A valuable set of insights from some of the leading writers of our time,
this set will make a valuable addition to any litterateur's library.