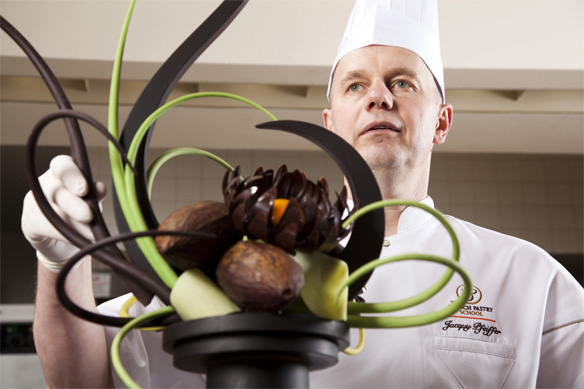 Kings of Pastry is a truly thrilling and informative look at the somewhat secretive and incestuous world of French patisserie - specifically, the pastry- and candy-making portion of the quadrennial Meilleur Ouvrier de France (MOF) competition among craftsmen in various disciplines. Acclaimed filmmakers D.A. Pennebaker and Chris Hegedus (Don't Look Back, The War Room) follow three competitors as they prepare and compete in this high-pressure contest whose winners will forever hold the highest distinction in their field.

The film highlights Jacquy Pfeiffer, a French-born but Chicago-based pastry chef, who has a great emotional and professional investment in the competition (although this could easily be said of every other competitor, too). Jacquy has an American girlfriend and daughters, and must leave his adopted home for several weeks to practice prior to the MOF. We also meet Philippe Rigollot, a candy specialist whose work is inspired by his own children, and the somewhat blasé Regis Lazard, who is perhaps the least intensely motivated of the three.

The parameters of the competition are roughly as follows: Over a period of three days, sixteen contestants share kitchen space as they prepare approximately forty recipes of varying degrees of complexity. They include lollipops, chocolate candies, small cakes and tarts, a wedding cake, a large-scale dessert "sculpture," and a decorative piece entirely of sugar called a bijou ("jewel"). Each of these concoctions is judged by a dozen or so prior MOF laureates, who turn them over in their mouths assessing the balance of ingredients, weight, texture, and of course flavor. Each chef has already prepared his (there are no female competitors) individual recipes for each item in advance; each day's activities are timed.

Pennebaker and Hegedus have captured real toil and drama in this story of obsessive, driven creative individuals. The many potential hazards of baking are addressed, including the quality of ingredients, timing, and atmospheric conditions. The fragility of the different pieces - especially the sugar sculptures - is an ongoing source of tension.

It's unfortunate that the visual style of the film doesn't complement the beauty of the MOFs' creations. It's shot in a particularly unattractive digital format that leaves the film looking less polished than a local news broadcast. Given the extraordinary filmography of the directors, the clumsiness of the presentation came as a surprise.

On balance, however, Kings of Pastry is a fitting tribute to men of rare talent. It's an engrossing look at a rarefied and largely unknown world.

Image and Sound
As I suggested above, the film is not visually enthralling. The 1.33:1 transfer is good, but the source is the problem. The digital video image is too contrasty and lacks shadow and depth. The transfer itself is as detailed as it can be, although the aspect ratio strikes me as odd. I can only assume based on composition that this is the original ratio. The two-channel soundtrack is about what you would expect from a documentary of this type.

Bonus Content
Extras are few. There is a brief Interview with the Filmmakers, and two excised sequences that run an aggregate of about ten minutes.

Kings of Pastry is a captivating document that enshrines high-stakes competition in a field about which most of us have only the most cartoonish notion. It's a fine portrait of artists at work. Highly recommended.