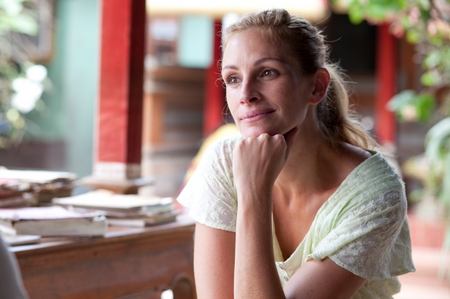 Eat Pray Love is a movie for
idiots, about an idiot. It is about a woman with no tangible complaints
in life who creates a best-selling mid-life crisis for herself.
But Elizabeth Gilbert and Julia Roberts can't fool me. Despite
their obvious effort, they cannot create a character worth spending
140 minutes with. The reason they fail on a credible artistic
level is the same reason that the book upon which the film was based
was so successful: the Elizabeth Gilbert depicted in the film is a brainless
invertebrate with no consideration for anyone but herself. Her
lack of qualities is, I'm sure, exactly what droves of self-medicating
pseudo-intellectuals found so appealing about her story of unromantic
love, gluttonous consumption, and phony spiritual experiences.
But my experience was different.

That's probably because I don't
identify with a person who has a rewarding career, a house in New York
City, and a vibrant social life - but desperately needs to give it
all up. I don't identify with a person whose chief struggle
in life is a sudden need to travel around the world, visit exotic places,
and grapple with languages and global cuisine. I don't identify
with the soulless idiocy that might drive a person to consider this
type of situation a "crisis," nor do I empathize with those who
make poor life choices and then simply walk away from them. I
don't identify with a life of unappreciated privilege or the type
of ignorance that romanticizes foreign locales - especially those where
the standard of life is significantly lower than ours - as places of
unmitigated wonder and mystical possibility. I don't identify
with these things because they are all signs of delusion, signs of a
personality with no self-knowledge or comprehension of life's endless
variety. I don't identify with these ways of looking at things
because they comprise some of the chief defects of our society, defects
that are coddled by an economy whose foundation rests upon its ability
to convince people to use anything and everything including books, pills,
sports, religion, entertainment, and even our own friends and family
as mere medication. It's impossible to deny the importance
of each of these things in a rich, well-rounded life, but people like
Gilbert are searching for answers, desperately, in all the wrong places.
They seek external "explanations" for things that only happen internally.
The unwarranted dependence upon "solutions" that come from outside
our own brains and experiences is the ill itself, not a path to happiness.

Eat Pray Love is not just philosophically
misguided, but it bears the fervent incuriosity of the recent convert
- the unquestioning conviction that it is depicting a genuine revelation-in-progress,
when what it actually portrays is a woman who is so self-involved, so
utterly unaware of the ways in which her actions affect others, and
so deeply deluded by the kind of provincial ignorance that only affects
certain New Yorkers, that she actually believes her behavior is selfless
instead of selfish. In this way, the film communicates a message
that is the exact inverse of what it thinks it's delivering.
Director and co-scripter Ryan Murphy takes Gilbert at her word, translating
the best-selling book to film as if it were gospel, never once questioning
Gilbert's motives for going on this "journey," let alone writing
a book about it that just happens to be an agglomeration of several
highly trendy best-selling topics in one sugary narrative. Murphy
shows a technical facility that goes hand-in-glove with the story's
aggressively romanticized search for pleasure: the entire film is suffused
with golden light, regardless of location, even in the scenes shot in
New York. The photography is pleasing, but it's also manipulative,
just like the rest of the movie, which tries so hard to convince us
that Gilbert was experiencing a crisis that could only be resolved by
grotesque indulgence in luxury.

Julia Roberts doesn't improve matters,
displaying her boundless capacity for making sheer lunacy appear attractive,
at least for a second. But Roberts has nothing behind her eyes
other than an interest in making certain facial expressions over and
over again, movie after movie, particularly that smile that says, "I
get everything I want. Too bad no one else does!" Her
performance in this movie embodies no one other than an over-indulged
celebrity - which, perhaps, may be the case with the post-Eat Pray
Love Gilbert. She certainly got what she wanted. It's
not every day that a journey into self-discovery ends with a huge-selling
book and a movie deal. What a lucky coincidence for her.

The enhanced 1.78:1 transfer looks very good, as is usually case
with Sony. The glowing photography bears excellent contrast here
and deep blacks. The film's color palette runs to earth tones,
which never appear muddied or bland. The 5.1 surround track is
enveloping, with good use of ambient effects. The technical presentation
is very strong overall.

The DVD release offers the 140-minute theatrical cut, as well as
an extended cut that runs 146 minutes. Since I am not a
masochist, I didn't bother to explore the changes, and only watched
the theatrical cut. There is also a very short making of featurette
that doesn't add much to one's knowledge of the production.

Anyone interested in trying to pinpoint
what is wrong with contemporary American culture would do well to watch
Eat Pray Love. It is a portrait of a woman who completely
lacks self-knowledge, to the extent that she finds herself driven to
abandon a life of privilege and seek answers from places and people
who have no investment in her, and about which she knows even less than
herself. Roberts is the perfect star to play such a mentally crippled
personality, but it doesn't make the film any easier to watch.
If you hate yourself, rent it. Otherwise, Skip It.