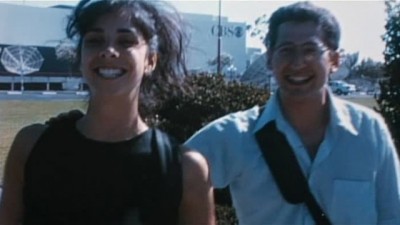 was co-written and directed by Sam Seder, who has gone on to success
as an actor and radio and television host. It stars Sarah Silverman,
and features appearances by Andy Dick, David Cross, H. Jon Benjamin,
Kathy Griffin, Laura Kightlinger, and Marc Maron. It is a funny, improv-driven
film that also serves as a portrait of the comedy scenes in both New
York and Los Angeles at the time of its production.

Susan (Silverman) is a comedian who decides to leave New York and travel
to Los Angeles for pilot season. Pilot season (approximately April -
June) is when studios cast for the new shows scheduled to air that fall.
Susan doesn't tell her "performance artist" boyfriend Max
(Seder) until the last minute, but he follows her out to LA anyway,
despite a proclaimed disdain for that city. Susan becomes busy trying
out for shows, under the tutelage of her airheaded manager Jason (Andy
Dick) and his put-upon assistant (Lauren Dombrowski). Before he knows
it - and without intending to - Max has drawn the attention of an ambitious
entertainment attorney named Ken Fold (Benjamin), who could not be more
enthusiastic about turning Max into a star.

The best thing about Who's the Caboose? is that it is not dramatically
or thematically ambitious. This leaves the actors free to explore their
parts and their environments realistically, drawing humor from casual
interaction and mundane situations. The movie is about the years of
struggle that every artist must endure, sleeping on couches, battling
entertainment fringe figures who want to shape and mold you into their
own visions of success, and getting by on scant wages. It's also about
the moral and social freak show that is Los Angeles and the bizarre
priorities of people who are drawn there for one reason or another.
Not dated at all fourteen years after its original release, Who's
the Caboose? remains fresh, honest, and very funny.

The perfunctory transfer leaves much to be desired. Who's the
Caboose? appears to have been shot on very grainy 16mm stock. But
I've seen plenty of DVD transfers from 16mm that look a whole lot better
than this. To start with, the image is not enhanced for 16x9 presentation.
The letterboxed image is extremely muddy, with colors bleeding into
each other all over the place. Darker scenes fare worse than better-lit
ones. The soundtrack is about on par with the image. It's clear enough,
but is flat and lacks dynamic range.

None. A reunion commentary would have been lovely given the combined
talent involved here.

Who's the Caboose? serves as a "where did they come from?"

for a whole host of well-known comic actors. But it's also a good film
in its own right. It's too bad the presentation and extras don't match
the quality of the movie itself. Rent it.

*Addendum: Sam Seder confirmed (via Twitter) that the feature was shot on digital beta and then transferred to 16mm. He also said that Who's the Caboose? was the first fiction feature to use that process. I should also note that the title is available via Netflix Instant, and the streamed iteration of the film is 16x9.