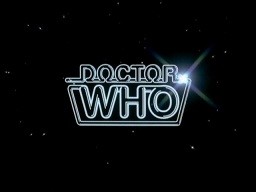 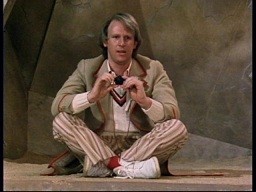 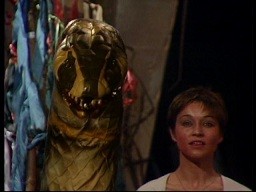 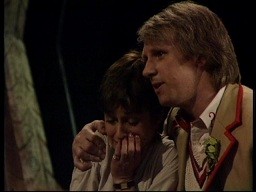 Snakedance was a four-episode serial that occurred midway in Peter Davison (the Fifth Doctor)'s tenure on the program in the early 1980's. It is a sequel to the serial Kinda, a story that had occurred early during Davison's run (but not immediately preceding Snakedance). Kinda was a trippy story involving an ancient evil known as the Mara, who managed to force his way into the consciousness of the Doctor's companion Tegan (Janet Fielding). The Mara, at the end of the story, memorably assumed a physical form (realized as a balloon snake) and was defeated by mirrored reflections of itself.

It seems the Mara, however, was only lying dormant in Tegan's mind through the intervening adventures she had with the Doctor. In Snakedance, the Mara is able to trick the Doctor and his companions (Nyssa, played by Sarah Sutton, is still traveling in the TARDIS at this time as well) to materialize on its home world of Manussa, conveniently during the 500th Anniversary of its original expulsion from the planet. The Manussans are celebrating with a festival - and the Mara soon finds additional victims to take over in the characters of Lon (a spoiled brat son of the planet's leader, who curiously doesn't appear in the story, played by Martin Clunes) and Ambril (a pompous archaeologist played by John Carson from Captain Kronos: Vampire Hunter). Clearly, the Mara has plans to reassume power over the world.

Ultimately, Snakedance is a serviceable sequel to Kinda - though I do think the original Mara story holds a slight edge. The Kinda homeworld of Deva Loka was inhabited by a more intriguing - and "alien" - race than Manussa, which made that serial a bit more interesting. Neither serial ranked among my favorites when I first saw them nearly 25 years ago, but I think I appreciate both of them more in retrospect having seen them a quarter century later on DVD. In any case, Snakedance has some good old-fashioned over-the-top television performances by its leads. Martin Clunes is especially effective in his melodramatic solipsism and rudeness. I was also impressed by the pre-CGI Manussan landscapes, with surprisingly effective set designs that emphasized the snake motif so important to the villainous Mara. The costumes were also interesting (if a bit on the excessive side), with the exception of the dreadful outfit Nyssa wore. The less said about that the better.

The story itself, however, is a bit too obvious, even by Doctor Who standards. It's quite clear, in other words, what roles the characters will be playing as the plot unfolds. I was also a little disappointed in the characterization of Nyssa here. Nyssa was one of the better foils for the Doctor, I thought, as she had a clinical and thoughtful mind. In this story, though, she seems to function as a fairly generic companion, concerned about her friend Tegan, advancing the plot by asking the Doctor questions, and little else. Maybe I've been spoiled by the development of her character after-the-fact in the contemporary Big Finish audio productions.

Since I grew up with this series, perhaps I'm not the best person to judge these episodes. I thought they were reasonably fun overall, but it could be nostalgia on my part. Snakedance is a fairly straightforward adventure that serves as a sequel to the trippier Kinda. Curiously, the DVD release of Kinda had an option of new CG-footage of the Mara during its climatic battle; Snakedance's DVD does not - and it too ends with a cheesy "balloon snake" showdown. This oversight didn't bother me per se, as I prefer watching vintage Doctor Who with its original effects sequences - but it's still curious. Snakedance itself is a serial I would recommend to Doctor Who fans new and old alike; however, I'm bumping that up to "Highly Recommended" based upon the plentiful extras included on 2 Entertain's DVD release (much more on these below).

Note: As mentioned earlier in this review, the Mara previous appeared in the story Kinda. This story has been concurrently released on DVD with Snakedance, and I reviewed that disc here a little while ago. Decades later, a third Mara story would occur, this time in a Big Finish full-cast audio production titled The Cradle of the Snake with Peter Davison, Sarah Sutton, and Janet Fielding resuming their original Doctor Who roles along with Mark Strickson as Turlough. It is available directly from Big Finish Productions here. 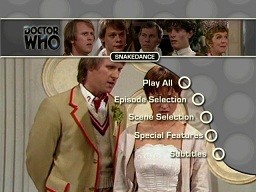 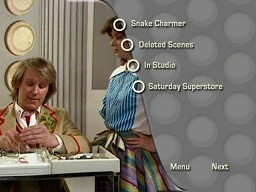 The episodes of Doctor Who: Snakedance are presented in a full frame 4:3 aspect ratio that reflects its original television broadcast. The image looks as good as I've ever seen it with solid colors and okay detail - don't expect stellar blu-ray visual quality here, however, given the show's 1980s video production roots.

Wow. Where to begin on the extras? As usual for vintage Doctor Who DVD releases, Snakedance arrives loaded with bonus material.

Let's begin with the audio track options. Actors Peter Davison, Janet Fielding, and Sarah Sutton provide a spirited and jovial commentary for all four episodes. Plus, an additional option offers an isolated music score through each episode. If the idea of plowing through these alone doesn't appeal, then select the optional Info Text and listen to one of the previous extras while reading subtitles that provide thorough background on the production of Snakedance.

And then there is the historical material. Deleted Scenes (3:08) presents the cut denouement (where the secondary characters are remarkably cheerful after their ordeal) spliced in with context footage from the show. The switch in visual quality is noticeable, but that doesn't detract from the curiosity factor this extra satiates. In Studio (6:51) gives behind-the-scenes footage of several special effects sequences. Saturday Superstore (14:17) is a vintage interview with Peter Davison; it's a good extra, although a little context for the interview could have been provided. Photo Gallery (5:23) streams stills from the show set to the episodes' score. And, the Radio Times Listings appear under PDF materials.

And then, finally, there's the promotional content. Coming Soon (2:20) shows clips from other Doctor Who episodes available on DVD. Commercials for the first Doctor Who season starring Matt Smith and the cable channel BBC America, it should also be noted, precede the main menu.

The concurrently released Kinda may have the slight edge on the two Mara releases in terms of extras - but it is only slight. As you can see, this DVD will provide hours of informative extras for the obsessive Doctor Who fan. The uniformly excellent track record of Doctor Who DVD releases continues with Snakedance.

Snakedance is a more straightforward sequel serial to the much trippier Kinda story from the Peter Davison era of Doctor Who. Like its predecessor, Snakedance involves the uniquely Fifth Doctor foe the Mara. It should be enjoyable enough, despite some lackluster plotting, for Doctor Who fans - though Kinda should be viewed first for context. Given the DVD's bountiful extras, I'll go with a "Highly Recommended" DVD Talk rating.