Blue Underground // Unrated // March 29, 2011 // Region 0
List Price: $29.98 [Buy now and save at Amazon]
Review by Stuart Galbraith IV | posted March 23, 2011 | E-mail the Author
Dario Argento's follow-up to his internationally successful and influential Suspiria (1977), Inferno (1980) was the second-part of a trilogy that belatedly concluded with The Mother of Tears (2007). Inferno is a frustrating but worthwhile viewing experience, incredibly stylish throughout although this stylishness comes at the expense of coherence. At its best the movie's major set pieces capture the hypnotic sensations of dreams and nightmares better than just about any movie ever made, but first-time viewers will find it confusing when the plot and its particulars can be discerned at all. The end result is a movie that is both a unique, impressive achievement but because of its underlying incoherence is as taxing as it is mesmerizing.

Blue Underground's Blu-ray presentation is outstanding, not surprising as it was "freshly transferred from the uncut and uncensored original negative." Primary colors - so much of the film is bathed in red and blue light - pop off the screen and the image is so sharp and clean as to belie its 30-plus years. The film was an early Dolby Stereo release and these tracks have been remixed for 7.1 DTS-HD and 5.1 Dolby Digital Surround EX, though the original stereo audio has been included as well. Extra features include the label's usual fine assortment of cast and crew interviews (some in high-definition) and other supplements. The title was previously released to DVD in 2000 and reissued in 2007, though some of the extras here are brand-new. 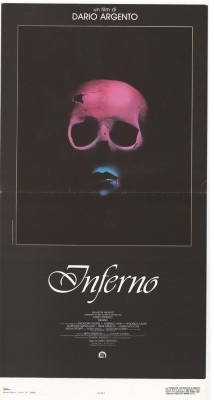 In awkward, racing exposition over the opening titles, Rose Elliot (Irene Miracle, Midnight Express) buys a rare book from antique dealer Kazanian (Sacha Pitoëff) suggesting the creepy old New York apartment building she lives in may be home to one of the Three Mothers, evil sisters that rule the world with sorrow, darkness, and tears. (The others are said to be in Rome and Freiburg, Germany.) Rose writes a letter about this to her music student brother in Rome, Mark (Leigh McCloskey), and immediately after snoops around her building's basement, looking for confirmation of its identity.

In the film's best scene, she discovers a hole in the basement floor, below which is a hidden, completely flooded ballroom. Illogically and fully-clothed, she swims underwater looking for some keys accidentally dropped into the water, and eventually bumps into a rotting human corpse whose presence, like much of the rest of the film is never explained nor mentioned again. Also illogically, instead of packing her bags and heading for the hills, or perhaps calling the cops to let them know about the dead body in the basement, she calmly returns to her apartment so that she might be menaced by the shadowy figure continuously stalking her.

In Rome, Mark receives Rose's letter but, instead of reading it, gazes at the hypnotically beautiful student (Ania Pieroni) - Pieroni has a bit of a mustache, highly visible in this high-def version - who may be one of the three mothers. Instead, in a colorful but completely unrelated subplot, Mark's classmate Sara (Eleonora Giorgi) becomes intrigued by Rose's letter and visits a mysterious library (actually the Biblioteca Angelica) and locates a copy of The Three Mothers for herself. She's chased around the library by a creepy-looking guy, but manages to escape to her apartment only to be stabbed, along with a neighbor, by a gloved killer. Who's never seen or heard from again.

In more frustrating scripting Mark, completely oblivious to all of this, returns to New York and is surprised when his sister is nowhere to be found. There he meets the Rosemary's Baby-like eccentrics that live in the building, including wheelchair-bound mute Professor Arnold (Feodor Chaliapin, Jr.), his nurse (Veronica Lazar), and ever-smiling caretaker (Alida Valli*), as well as a sickly countess (Daria Nicolodi, Argento's actress-wife).

The $3 million production, originally released in America and some other parts of the world by 20th Century-Fox, is more lavish and even more stylized than Suspiria (1977), still Argento's best horror film (his early giallo are also excellent). Though the film's interiors don't look remotely realistic, and in the case of the New York settings like nothing found anywhere in America, let alone New York, they're nonetheless very imaginatively designed for maximum creepiness, and obvious effort has been exerted to make almost every scene powerfully scary and/or disturbing.

The underwater ballroom sequence works best. It captures the essence of dreams and nightmares: the floating sensation, the mixture of the familiar and the unknown, the hypnotic, natural sounds of water, etc. What other scenes lack in intelligence and delicacy are compensated by chutzpah. In another set piece, a man is eaten alive by rats near a sewer drain. The dozens of king-size rodents crawling all over the unfortunate, sewage-soaked actor are disgustingly real.

In 1.85:1 widescreen, Inferno looks stupendous, one of Blue Underground's best-looking Blu-ray titles thus far, with very sharp definition and rich primary colors throughout, the latter crucial in appreciating the film's assets. Were it not for a few dated hairstyles the film might be mistaken for brand-new, certainly not one 31 years old. Originally released in Dolby Stereo, the 2.0 surround tracks have been retained, supplemented with a 7.1 DTS-HD track and another in 5.1 Dolby Digital Surround EX. An Italian mono track is also included, though the optional English subtitles are of the SDH variety, with descriptions of offscreen noises, etc. French and Spanish subtitles are also included and the disc is region-free.

Supplements include two new interviews in high-def. "Art & Alchemy" profiles actor and artist Leigh McCloskey, interviewed in a room at his home completely painted, every square inch from floor-to-ceiling, for a project he began in response to 9/11. It's an interesting, informative interview, as is "Reflections of Rose," in which Irene Miracle is likewise profiled. Her career is also full of surprises, touching most of the great postwar Italian directors, and her frank comments about not getting along especially well with Argento offer clues to her disappearing from the film early on. Also included is a previously released (and in standard-def) interview with Argento and assistant director Lamberto Bava; Argento also offers an optional 30-second introduction to the feature. A trailer, apparently an up-res transfer, appears to be an international one rather than a trailer produced by Fox.

Horror movies are rarely this dream-like, and for its gorgeous images alone Inferno deserves to be seen even by non-horror movie fans, though its confusing, almost non-narrative screenplay is a drawback. Highly Recommended.

* In her late middle-age and with that grimacing smile, the one-time beauty here looks like a female Grinch.