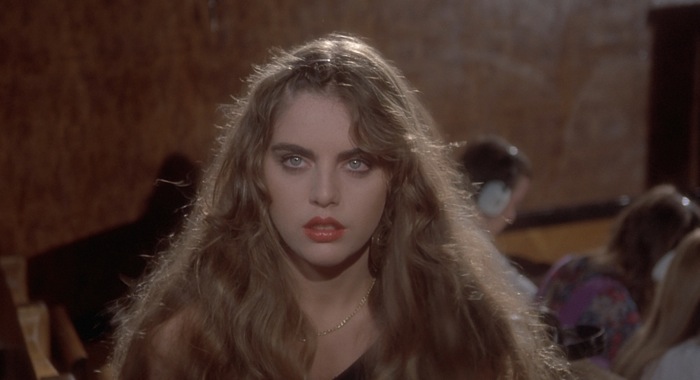 Dario Argento is a filmmaker whose
work is easy to appreciate but difficult to love. He is easy to appreciate
because his movies are the product of a specific vision and a unique,
influential aesthetic. Argento's neon-lit sets and moody, Lovecraft-infused
plots have atmosphere to spare. Yet he is difficult to love because
his brand of horror, although suspenseful and engaging, is devoid of
emotional content. His characters are often types - innocent virginal
women and naïve, confused men - cast merely as the vulnerable targets
of evil predators. There is little psychology or personality driving
Argento's films - other than the director's own.

Inferno starts out strongly,
with a voice intoning the mythological premise of an ancient book known
as "The Three Mothers." We learn that three evil sisters secretly
rule the world from lairs constructed specifically to harness their
special powers. In New York, Rose (Irene Miracle) discovers that she
may be living in one of these lairs - an old Gothic apartment building.
She sends a letter to alert her brother Mark (Leigh McCloskey), a music
student living in Rome. The letter finds its way into the hands of Mark's
classmate Sara (Eleonora Giorgi), which in turn brings her to a tragic
fate. Mark finds his way back to New York, but is too late to help his
sister, who has already been found by the evil forces she has accidentally
unleashed.

As an exercise in style, Inferno
has a hermetic perfection about it. The visual method is characterized
by large swathes of color (washes of light, spans of empty wall space,
unusually large doors and windows) and graceful camera movements that
always maintain compositional integrity. Argento creates his own visual
grammar.

But Argento is somewhat undone by the
characters he creates - one-dimensional types who don't have inner
lives to speak of, nor are we ever certain that they have much comprehension
of what is happening to and around them. This makes it difficult to
empathize with them. If characters on-screen have some grasp of the
plot (even when we don't), this makes it easy to forgive plot holes.
We follow stories based on characters' experiences. It's never very
clear that Rose or Mark understand that evil has been let loose in their
world - and that might be acceptable if we knew that they know or
don't know. Inferno leaves its characters in the lurch, however,
without establishing clarity as to the protagonists' relationship
to the horror they face. And this causes the film to lose momentum in
its second half.

It's a shame that Inferno
isn't strong enough to deliver on its many interesting ideas. Ultimately,
a film's ideas need to be enshrined somewhere concrete within the
film - and most often that place is within its characters. But Argento
relies too heavily on visual technique, which, while impressive and
often arresting, can't undo the awkwardness of characters who have
been abandoned at the film's center.

Blue Underground presents Inferno in a very strong enhanced
transfer that does great justice to the movie's bold color palette
and striking imagery. Made in 1980, Inferno's image shows no
sign of age. The transfer is rich in color, with dense black levels
and appropriate sharpness. The soundtrack is available in a variety
of mixes, including English 6.1 DTS, 5.1 Dolby Surround EX, and 2.0
Dolby Surround. I listened to the stereo track, since I figured that
would be the closest to the film's original mix. The sonic experience
was robust, atmospheric, and clean. Like the image, Inferno's
soundtrack shows no sign of its age, apart from the somewhat dated (but
perfectly suitable) score by Mark Emerson.

Brief interviews with stars McCloskey and Miracle, and with Argento
and assistant director Lamberto Bava, running an aggregate of about
fifteen minutes, are all we get. The interviews are recent, and each
participant offers interesting and fond recollections of the production.
A commentary from Argento would have been nice, but judging from his
manner in the interview, perhaps he eschews such things.

Inferno is worth seeing, particularly
on a dark night with some friends and a bottle of tequila. It's carefully-mounted
and meticulous in its look. But the movie fails to create characters
who are capable of expressing much more than fear, and that keeps us
out of their heads. Rent it.