The Movie
After taking a semester off college for an internship at the U.S. Olympic Training Center in the fall of 1995, I was elated to find out months later that I had secured a spot as an "information team member" at the 1996 Summer Games in Atlanta. It didn't pay, but it was a free trip and the excitement of being at the Olympics was worth its weight in gold (heck, even bronze!). So it is with great shame that I have to admit that when I found out my assignment a week before my departure, my enthusiasm fizzled like that French swimmer in the 2008 men's 400 freestyle relay.

Despite my dreams of seeing track, swimming, diving or a bevy of other sports I loved to watch, my bubble burst when I learned that I would be working at the rhythmic gymnastics venue amid hoops, ribbons and clubs (it was especially cruel given that I first saw the word "gymnastics" on my sheet, prompting instant elation thinking I had been assigned the popular "artistic" version of the sport). Making matters worse, I wouldn't even be in Atlanta at the heart of it all, but an hour away on the University of Georgia campus. [Insert Debbie Downer trumpet sound here.]

It's not a feeling I'm proud of, and I thankfully went through a quick attitude adjustment after seeing the commitment and dedication of the athletes. So it's with further shame that--despite my introspection--I must admit that whenever I hear the term "synchronized swimming", I immediately think of the Saturday Night Live sketch with Martin Short and Christopher Guest ("I know you! I know you!"), and I laugh. One of the show's finest moments ever, it probably went a long way in shaping the general public's less-than-admirable attitude about a very difficult sport done by athletes in far better shape than most of us.

Yep, I'm part of the problem. That climate probably helped contribute to the cloudy outlook held by the group of skeptical middle-aged men in The Swimming Issue (Allt Flyter), an entertaining and lighthearted Swedish comedy that uses synchronized swimming as a vehicle to explore some of life's greatest lessons--like setting the right priorities, trying your best and not giving a crap about what other people (like the 1995 me) think.

Meet Fredrik (Jonas Inde), a 40-something divorced father recently fired from his writing job (don't believe his constant claims of "I quit!"). A broken man suddenly struck with a sense of worthlessness, he opts to retreat into depression--his only sense of purpose coming from the games of floorball he plays with his buds. But when their rec center hours are slashed and a bachelor party for Larry (Jimmy Lindström) results in a hit videotape of the gang goofing around by the pool, a laughable idea slowly morphs the band of misfits into something else: A group intent on competing at the World Cup in Berlin, where all-male synchro swimming teams will compete for the sport's top prize.

It takes some convincing before the gang agrees, and even then they aren't always comfortable--especially Victor (Peter Gardiner), the jockiest of them all. Also along for the ride are Charles (Andreas Rothlin-Svensson), Fredrik's closest friend and a rec center employee; Markus (Kalle Westerdahl), who keeps the activity a secret from his son; Kjelle (Shebly Niavarani), whose work as a probation officer threatens his participation; and Peter (Benny Haag), who I can't really say much about. (And that brings me to perhaps my biggest gripe with the film--most of the supporting players aren't given enough attention.) In need of more members to qualify, the group later adds Bobo (Henrik Svalander) and Jarmo (Ossi Niskala). The latter addition--cemented after a memorable audition--raises a curious eyebrow from the "I'm not homophobic!" Vincent, who fears that Jarmo might be...you know...Finnish.

But with the men sort on time, the learning curve may not be long enough--especially when they have trouble simply staying afloat. Things also aren't going swimmingly for Fredrik at home: Ex-wife Lotta (Paula McManus) has just accepted a new job in London, but needs to temporarily leave daughter Sara (Amanda Davin) in daddy's care--a situation that annoys Sara, whose relationship with father is already fractured due to Fredrik's lack of responsibility and poor communication. But the irritated Sara might eventually come in handy considering she's a pretty good synchro swimmer...if only she can take her dad seriously:

"You have no idea how embarrassing you are."
"I'm embarrassing for not accepting discrimination?"
"You're a white middle-aged man. What the hell do you know?"

It's all completely illogical yet highly amusing--no surprise considering that's the kind of sensibility that Scandinavians do so well. The Swimsuit Issue combines the silly with social commentary, all through a whimsical lens that is at its best during its depressed, deadpan mode. While the story isn't anything remarkably fresh (although I far prefer this to The Full Monty, which the box compares it to), the script and performances are refreshing--even when it revels in stupidity, like this sauna conversation:

"We don't float like the girls do."
"Water can't tell sex."
"It may be due to subcutaneous fat...girls have more of it."
"But Markus floats like a cork."
"What is the idea by that Greek dude called, the one in the tub?"
"Archimedes Paradox."
"Things lighter than water float."
"No, an object floats if its weight is less than the water pushed aside..."
"That's exactly what I said."

And despite the protestations of the men's wives ("What about a normal mid-life crisis? Dye your hair, pierce a nipple!") and a healthy case of reverse gender discrimination at the hands of an angry instructor (Maria Langhammer), the film has a lot of positive, feel-good messages about acceptance--culminating in a practice run at the Swedish Pride festival, the movie's most endearing sequence (although can someone please explain to me why I counted 10 men in the water in one shot? Did one of them give birth under water?).

The Swimsuit Issue is cute, with a slightly off-kilter sense of humor (Fredrick attempts to teach swim formations based on banned substances: "What do we start with?" asks a curious team member. "Nicotine. Then we move on to the harder stuff..."). It's filled with the mandatory gender jokes (team pedicure!) and role reversal humor, but even the predictable stuff here works because the actors and the overall tone are so darn lovable (and we get a nice history lesson, too!). That helps me forgive the two forced dramatic turns that the film takes--one a thankfully short conflict with Lotta, the other a more annoying (and unnecessary) reaction from Fredrick that unveils in the final act. The film is better than those two errors, and could have reached the same place in far more convincing fashion. Why ruin all the fun?! We were having such a good time!

Director Måns Herngren, who co-wrote with Jane Magnusson, knows exactly how he wants the film to look and feel--and he beautifully maintains a difficult balance of bleak and buoyant. The film has a steady '70s vibe, most of the songs coming from Swedish band The Soundtrack of Our Lives--selections that fit the film perfectly. Herngren also shows off a keen yet understated mastery of visual comedy--the snickers often sneak up from the depths (a recurring joke with the new practice pool never gets old) or across the faces of the cast, the film usually not opting for the easy, immediate punch line and reveling in uncomfortable moments. It also helps that Inde is so charming--he manages to harness a difficult combination of being disagreeable yet cute at the same time, his frustration constantly boiling under the surface and manifesting itself in some adorable outbursts.

This is an amusing work, in every positive sense of the word. Ultimately, The Swimsuit Issue isn't really about synchronized swimming at all; that's just a vehicle. As for the climatic competition, it's almost an afterthought--a shame considering the bounty of material that's hinted at as the camera pans across the practice field with teams preparing for their big moment. That sequence conjured up thoughts of a male synchronized swimming version of Bring It On!, a thought that makes me giddy. Maybe for the sequel, guys?

Video:
Presented in an anamorphic 2.35:1 transfer, The Swimsuit Issue looks like fall in the '70s, a tone the director seems to have intentionally chosen to fit the middle-age crisis that befall some of the characters. The image is frequently bathed in shades of brown and grey, and even the bursts of blue and yellow that intrude during the swim sequences are a little dull. We get some healthy grain and some nice detail, and I imagine this is how the film is intended to look--which isn't stunning.

Audio:
Just a 2.0 Swedish track, but that's really all that's necessary. The bulk of the film takes place away from any impressive audio cues, and the dialogue is always string. Sure, some cool splashing effects would have been nice to submerge us, but we get buy alright. Forced Swedish subtitles are here, except for the few lines in English. 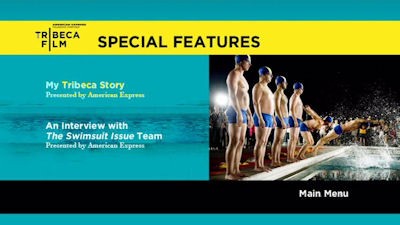 Extras:
Two short featurettes are included: My Tribecca Story (2:14) is an interview with director Måns Herngren talks about the origin of the script and what he learned about the sport, and about its debut at the famous film festival. He returns in An Interview with The Swimsuit Issue Team (2:57), where he is joined by writer Jane Magnusson--a journalist and former synchronized swimmer who talks about her real-life experience teaching middle aged men: "They all like to drink, most of them are smokers, and the kind of Esther Williams-like synchronized swimming that they do is actually something that middle-aged smokers can do without looking ridiculous." Actor Jonas Inde also chimes in. Both just scratch the surface on what could have been a more expansive look at the film. 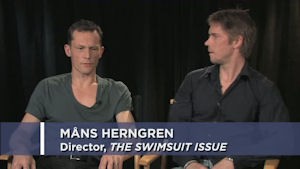 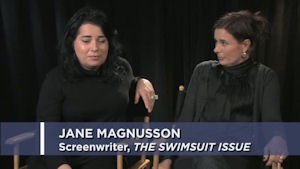 Final Thoughts:
Okay, so it isn't exactly based in reality--a ragtag band of middle-aged men training to become accomplished synchronized swimmers in a matter of weeks. But it's that whimsical Scandinavian sensibility that suits The Swimming Issue so well. Maintaining an oddly satisfying tone of bleak and buoyant, it's a cute, feel-good effort that filled with enough charm to overcome its forgivable flaws. It also throws in some universal lessons about family, friends, priorities, acceptance and blazing your own trail--haters be damned!--showing it has some social responsibility under all its silliness. Recommended.